Hello, my name is Bill and I was once a pontoon boat hater. In days of yore they were ugly. Floating boxes largely devoid of hydrodynamic properties milling around on the waterfront at withering speeds of 6 or 7 knots with a geriatric crew. This has all changed. They're sleek, fast, safe and loaded with amenities. Corian counter tops, BBQ grills, bars, refrigerators, thumping stereos, and plush seating for the multitudes. Look at this curvaceous model with the arch. I don't know what those ports are on the bow are all about. Either they are intakes for the turbine engines or gun ports but they certainly look purposeful. The quality of design and construction is orders of magnitude better than it was a decade ago, almost.... You see I still have a small beef about most of these vessels. 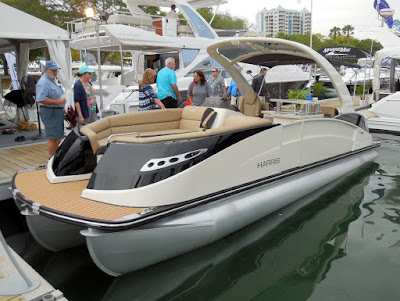 In a world full of advanced materials with names like FRP, carbon fiber composites, NidaCore and the ilk, why are they still using plywood for the decks?

It's not a tragically bad choice, but given the alternatives available it seems they could do better. I'm sure, at least I hope, that it's a minimum of AB grade marine plywood. 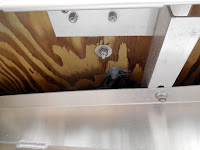 The thing about plywood, and even treated marine plywood is eventually it will rot. The only question is how long will this take? It's water intrusion into the plywood that's the issue. To be specific it's fresh water that's the problem. 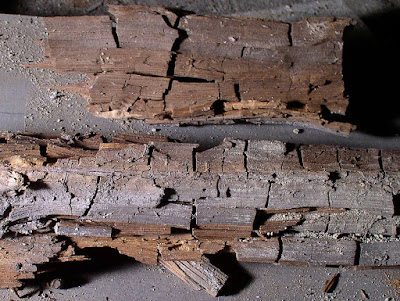 Dry rot and brown rot are common terms to describe the damage caused by a fungi that can only exist in the presence of fresh water. Where does the water come from? Lots of places. Typically it comes from rain, condensation and the water hose used to wash off the boat to get rid of the saltwater.

How does it get into the wood? Common starting points are penetrations into the wood from bolt and screws, and the end grain of the plywood.

I've seen many a stringer rotting where bolts used to secure the engine mounts created a water entry point. They look like they are made of fiberglass but in may cases it's just encasing a timber. Trampoline decks in boats got spongy in the first place starting where seats, Beckson plates and other items were screwed into a plywood and fiberglass laminated deck. 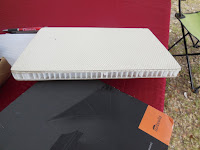 I asked a couple of sales persons about why plywood was being used for decking? It was apparent they had been asked the question before, and all immediately launched into a dialog about how good their warranties are, so don't worry.

I looked at enough warranties to validate they are good and several were better than many fiberglass production boats. A fair number of them are transferable to the next owner, although in some cases this was a bit fuzzy. By that it seems you may have to buy the used boat from a dealer to make this work. 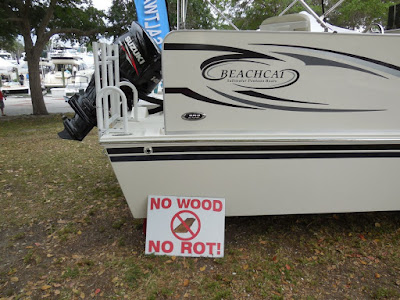 So why the plywood in the first place? I think first it's cost. A sheet of good marine plywood is around $100. A typical 24' pontoon boat would use 6 sheets ($600). Using NidaCore panels (section shown above) would end up at about three times the cost or around $2000 adding some fudging. So by spending about $1400 more deck rot would never be an issue.

I think there is a second reason for the plywood. I suspect that many pontoon boat builders just don't have much experience with fiberglass products. They live in the world of aluminum welding and fabrication and do an excellent job of it.

So would I buy a new pontoon boat with plywood decks? Sure. Would I rather they used something other than plywood? Again yes. Does it come with a Kegerator and daiquiri blender?

The photo of the Brown rot is from Wikipedia and was take by user Mätes
Posted by Bill Bishop - Parmain at 10:17 AM