I've been dealing with marine electronics for a long time and now recognize when death is close at hand. More likely it's emulating Norman Bates's mother who's telling the owner to call me. As a matter of fact I can sense the miasma of burned electronics through the phone during the call. The quavering desperation in the callers voice. The hesitant answers to questions like "When was the last time you used it?" "Hmmm, you don't remember?" "What model is it?" "Whoa, that's old, those vacuum tubes are really hard to find nowadays." What it's a sailboat? That means the radar is on the mast and the use of the bosun's chair along with someone with a strong back."

The coup de grâce in the conversation is the ever hopeful, "It could just be a loose wire you know." My inside voice is saying "sure buddy, but it's not statistically likely, and you should have called Hospice for this gear a long time ago." I hate these service calls. I will have to call the time of death and everyone is going to be unhappy including me. Like this is all my fault. 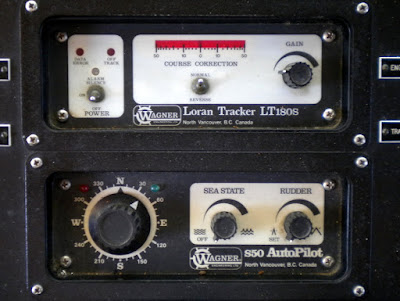 I try to be kind by being brutal out of the box, and sometimes this works. "Look Bob, the thing is older than Methuselah. I'm surprised it's still working at all. If it's broken it can't be fixed. It won't grow back and you can't just rub some dirt on it to make it better. Even if it could be fixed it will be expensive. Why would you throw good money after bad?"

But mostly the owner's oft misplaced optimism that it's only a simple loose wire or the ilk overrides. I sigh and go off ready to give Bob a bill to tell him in person what I told him for free on the phone. I bite my tongue and don't ask him if his TV at home has a picture tube.

So this begs two questions, "How long should I expect my marine electronics to last?" and "When do I decide to replace them?" 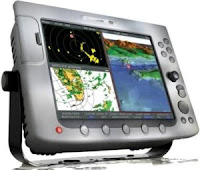 Behold the Raymarine E 120 the winner of NMEA's prestigious Best Navigation Product award in 2006. It was a powerhouse in the day. Big screen, fast for its time, and did everything that was possible. 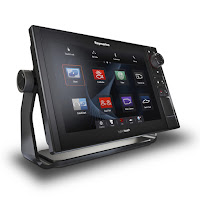 A decade and multiple generations later here is their current product. The eS127 that sells for around $3000. It has a touch screen, built in CHIRP sonar and GPS. It comes with charts and is lightening fast. The bottom line is it has far more technology and it's half of the price of the older unit.

My best answer to the first question is you should expect a lifetime of not more than 10 years max. There is some waffling here. A lot of this depends on the environment your gear lives in. A lower station enclosed and air conditioned helm offers the best chance of a long life. The unit that gets broasted daily on top of the tuna tower won't live as long.

And yes, I have clients with gear that has lasted far longer than the ten years and they are either proud of the fact, fiscally strained or are oblivious to the march of technology. Last week I was on a boat with a VHF radio that didn't have DSC capability.

The second aspect of product life is the fact that electronics are changing so quickly that after about the third generation of changes its likely that product support will quickly dwindle. The E120 shown above is now only marginally repairable depending on what has failed. Some parts and components used in it are no longer made. 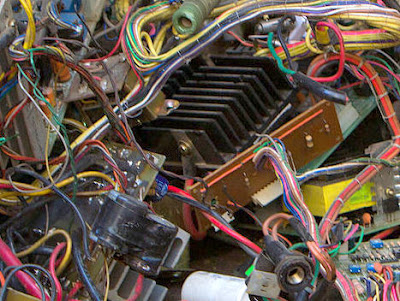 Now for the subject of when you should replace your navigation gear. Typically three things drive the decision. First you you have a major failure of some part of the system like the radar that is no longer made. The MFD, might still be fine but short of haunting eBay for a used radar unit you're SOL.

Ah yes, the third reason is you're tiring of having your boat referred to as a marine electronics museum or having it featured on Antiques Roadshow.

Next week I'm going to visit Bob. It will be a short visit and I will offer condolences for the passing of his radar. I'm about at 99.9% sure the radar on the mast expired from lack of use and the subsequent onslaught of entropy. No I'm not going up the mast to look at an antique radar, I conveniently forgot my bosun's chair. It's time for Bob to let it go and start anew.

The redacted electronics waste photo is from Wikipedia and was taken by user Victor Grigas.
Posted by Bill Bishop - Parmain at 9:56 AM