Back in January we had a cracker of a front pass through Sarasota. Not that I didn't know it was coming, I did. Cold fronts are a regular event here. Almost weekly at some times of the year. They typically roll in diagonally on a long southwest to northeast sagging line. This one was coming in late at night. The evening cooling tends to calm the associated T-boomers down on most occasions. Yadda yadda yadda, big deal. Severe thunder storm warnings are also a dime a dozen here and off to bed I go with a good book. I never saw the tornado watch that appeared at 12:45am. At 2:03am the cell phones start squawking I grab mine, fumble for reading glasses, and holy crap, what the hell going on? This thing didn't calm down, in fact it got meaner, a whole lot meaner. There were warnings galore lined up. 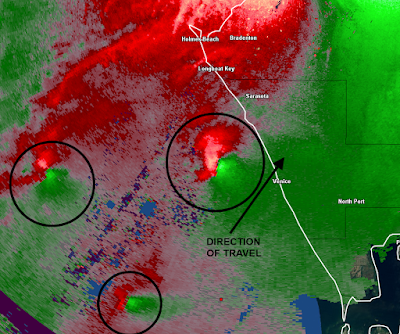 I plunked myself in the living room and turned on the TV. All of the local TV stations had dragged in their meteorologists who were clothed just one small step above pajamas. Warnings were scrolling at the bottom of the screen, but what I was paying attention to was the Doppler radar images which were showing rotation just off the coast due west of me.

Above is a cool NOAA screen shot from the event showing three potential areas of rotation embedded in the front. Note the areas of bright red right next to the bright green where shear is occurring. The one in the center created the tornado that will strike Siesta Key and move onto the mainland. It came to earth at 3:17 am in the Gulf of Mexico as a EF2 tornado and in just five minutes traveled 1.14 miles as it roiled across Siesta Key crossed the intercoastal and continued to ravage the mainland. Hence the title of the piece. 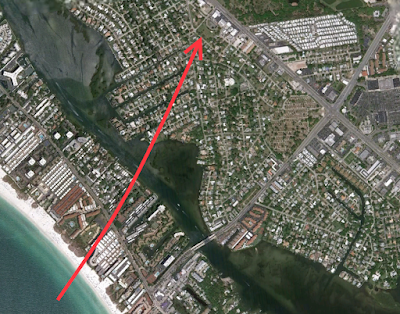 What's unusual is there are few if any cases of a tornado starting as a mesocyclone waterspout then becaming a tornado as it moved onto land or is it now a landspout? Within a minute or two it became a waterspout again as it crossed over the intercoastal waterway, or is it still a tornado? And then again a tornado on the main land.

This is the catch. There are all sorts of fuzzy verbal boundaries and lots of forms of, okay hold your breath now, Cyclogenesis.

At the micro end of this scale you have gustnados that can look like a tornado, but aren't. Landspouts are generally considered to be a relative of a typical waterspout but it's over land. Don't forget the mountainado and snowspout either. At the nano level there are dust devils, sand augers, fire whirls and dozens of other similarly named whirlwind manifestations. 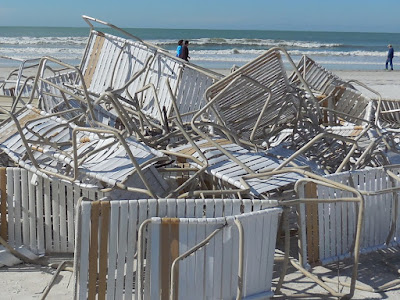 I waited a day for all of the emergency activities to finish and walked the entire tornado path starting on the beach. It was scoured clean and very flat. Damaged beach furniture had been put in piles but I think only half of them were found. I couldn't help thinking beach goers will be finding the balance of them while swimming in the gulf for years to come. 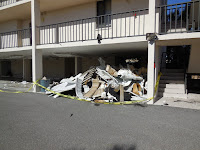 The six story Excelsior condo took the brunt of the tornado's wrath coming in from the gulf. Windows blown out, cars were damaged, but the most notable damage was caused by the roof being stripped off. This allowed the next few hours of very heavy rain to soak the building's interior largely ruining everything. 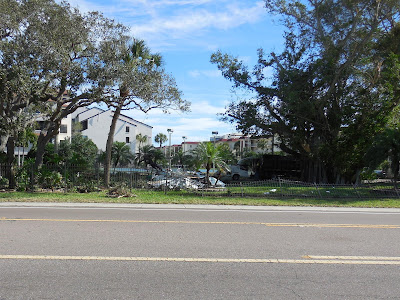 Here is were my observations differ from the official report that stated the wind field was 350 wards wide. You can clearly see the path where the tornado crossed the road and I would say the wind field was less than 100 yards wide, and the real damage was confined to a width of a few hundred feet. 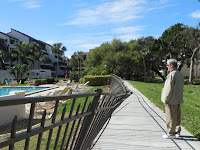 The bay side portion of the condo was luckier. Not that they escaped unscathed by any means. The spacing between the rows of condos was pretty large and the tornado spent  a chunk of its time there.

It did cross over one and got close to removing the roof on one of the buildings which will required substantial repairs. It then shredded its way through some oak trees and entered the intercoastal waterway. A quarter of a mile later it hit the mainland with vengeance. 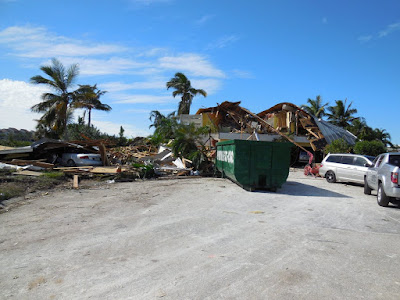 The two story home on the water was completely demolished, and resulted in the only injuries which were fortunately not life threatening. Fire and rescue personnel extracted two women from the second floor with lift bags. 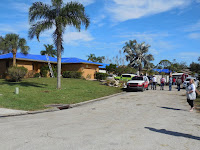 The tornado then coursed its way through a residential neighborhood for a distance of about two long city blocks.

A walk along the now blue tarped damage path was accompanied by the buzzing of dozens of chainsaws grinding through fallen tree limbs. The majority of the damage was blown in garage doors and windows, roof shingles and other roof issues along with damage from large branches and fallen trees and then it dissipated into thin air. 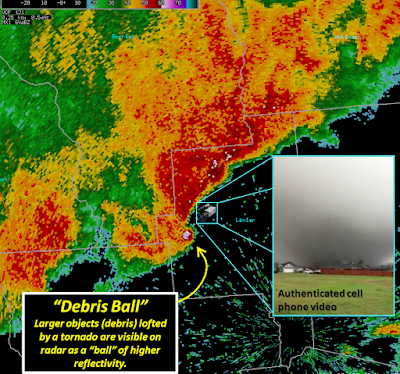 On the whole the National Weather Service does a great job, but most of us aren't paying any attention. I spoke to a neighbor who was on the edge of the damage. He was clueless, but the noise woke him up and went out onto his porch. His comment was it was raining shingles, branches and leaves. He understood exactly what the noise was and bailed for his bathroom. So this engenders the question, how does the weather service know there is a tornado?

The answer in most cases is they don't. What they can see via radar are places in a storm cell that have shear that creates rotation and may cause a tornado. When you hear there is a tornado on the ground it's usually because someone saw it and called in a report. There are a few exceptions to this. The screen shot above is a radar image showing a tornado's debris ball. This is what was causing shingles to rain down on the neighbor.  It's those few white and pink pixels at the end of the hook signature. This doesn't happen often due to weather conditions, what type of debris it is, and how much of it is there. 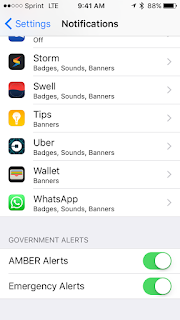 So what's the take away from all of this other than these are random and devastating acts of the weather god's wrath. There are several. Boaters (although not enough of them) generally pay close attention to the weather and me more than most.  It's a Darwin thing.

I had known the front was coming for a couple of days, but if I had taken a closer look, and I did have the tools to do this with my link to the NOAA/NWS Storm Prediction Center. They had been concerned about severe weather development in SW Florida two days earlier and had been tracking the front. I had just glanced at the weather maps and radar summaries thinking it's another damn front again. It would be a rainy day and not good one to be on the water.

My problem was this occurred less than two miles away from me, a friends boat was badly damage when a palm tree was ripped up and thrown at his craft, and two good friends lived within a block of the tornado's path. The thing that saved a lot of people's bacon including mine was the fact that most of us have magic information boxes in our pocket and if you turn on the "Emergency Alerts" switch at will at least tell you there are things like tornado warnings going on. That's what woke me up. Is yours turned on?


Here is the link to an earlier piece of mine that has photos' from a local captain's encounter with six waterspouts in close proximity in Florida Bay. You don't want to take your boat through them.

The radar images are from NOAA websites and the photos were take by the author.