Just because a chart says nothing is there doesn't mean there is nothing there and this is a case in point.  Sarasota Bay in general is devoid of features. Sonar images shows largely a flat plane punctuated by the occasional rough bottom of fish havens where construction rubble has been spread around. The center of the bay bottoms out at 12' and the charts say this is the deepest location, but its not. There is a large hole in the bay hiding in plain sight and I'm using Garmin's Quickdraw software to map it out along with some other good uses for this clever software 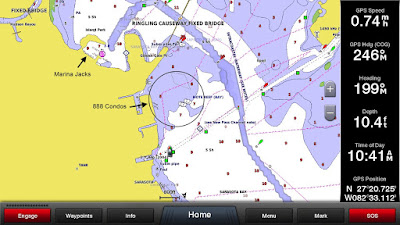 I put a circle in the area I'm mapping. The Garmin chart, and the corresponding NOAA charts both show the same thing. An innocuous area running about 5 or 6 feet deep with some fish haven rubble in a few places.

If I didn't use this area on occasion for autopilot compass setup because of the shelter from blustery winds out the the east I wouldn't have noticed anything. What caught my eye one day was the sonar depths and images weren't matching the charts, at all. There is actually a large hole in the bay here.

On subsequent trips to the area I tried to use side scan sonar to get a better look to no avail. The water wan't deep enough to get a good view. What I could tell was the sides of the hole had very steep sides in places, and over all it appeared to be a trench with a deep end. Last week I had the chance to play with the Garmin's Quickdraw software to map the area and it worked a treat. 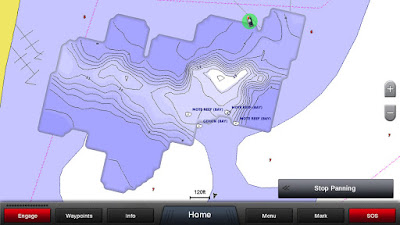 In 15 minutes I was able to build a one foot contour line map of the bottom. It's a trench with a deep wing off the end of it. The trough is about 12 feet deep and is about 100 yards long with the stumps of a few pilings left. At 16' it is by my reckoning the deepest part of Sarasota Bay. Pssst, don't tell any one but there are lots of larger fish targets showing on sonar in this hole.

After some research looking at aerial photos from as far back at the thirties I suspect this was originally a dock and associated dredging from some time ago. Specifically in 1925. As the discoverer I'll give it a name. The El Verona Trench for the old hotel building that still stands, but whose long dock protruding into the bay has moved into the past. 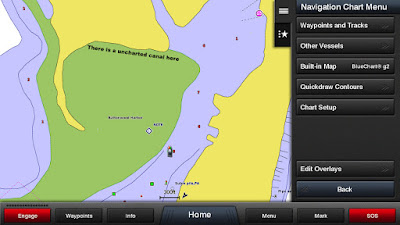 The west coast of Florida is riddled with canals. Most show up on the charts, but some don't and this is one. Universally these canals have never been sounded. The screen grab above has a canal, and I put some text where it's located. 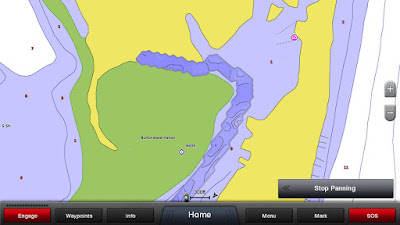 One run in and out with Quickdraw shows the actual canal. More passes will provide additional mapping detail and for the owner that lives here this is valuable information especially at lower water.

Another good way to use Quickdraw is to quickly map our shaky and shifty west coast passes. Sarasota Bay's best pass is Big Pass. It has about 6' of water give or take if you know where the channel is.

The Sarasota Yacht Club as a public and very welcomed service has for years has mapped Big Pass and as needed relocates the marks (nuns) in the pass. If my memory serves me right they take a small boat and collect the track data, feed to to Garmin's Basecamp or I think Homeport originally and plot a track through the pass. They do an excellent job, but it seems to me that Quickdraw would do the job faster. Below is a Google Earth view of the their survey data from just a few days ago. 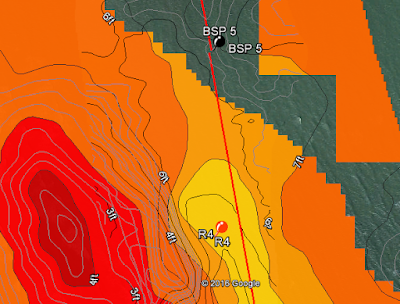 Take a screen grab, publish the map along with the new route waypoint location data and you're done. No Google Earth, .kmz files or post processing needed.

There is some nuance to the Quickdraw software. You have to stuff a SD card in the chart plotter to record the data. You have the option of displaying the new data, or hiding it. What you have to be careful of is the status of the tides. All of the data I've collected to date is set for a +1.6 foot tide and you have to be aware of your transducer offset. Quickdraw has offsets for tide height so if I'm recording data at a zero tide then I have to add 1.6 feet to keep the depth data at the same relative level. You can also add custom labels to points of interest to the new chart data.

The other thing that is cool about the Quickdraw software is you can share the files with others. In my case I've been moving my SD card from boat to boat and my mapped area has been quickly growing. It's a very clever and useful piece of software, and its included free in the current marine network software bundle and works on the newer chart plotters.
Posted by Bill Bishop - Parmain at 10:27 AM