The air is blue as I walked up to the boat. Not an attractive cobalt blue mind you but an ugly violet tainted blue. A painfully strained phone conversation with the boat builder is occurring, and it's apparently not the first one. The tech isn't hearing anything that's pleasing him.  I've had many of these Whiskey Tango Foxtrot conversations with builders myself.

So here is the set up. The new boat was being scrubbed for defects prior to delivery. There was the usual litany of mostly minor issues. Latches and switches that don't, sloppy caulking, dash instruments that aren't straight and the ilk. A special hose fitting is attached to the water pickup for the bait well, and the system is fired up. The bait well starts to fill, and a few minutes later water starts to pour into the bilge too. The hose has a leak in it somewhere along its meandering run through the vessel's innards. Okay feces happens, and a new hose is dragged over to the boat, and this is where everything goes to hell in the proverbial hand basket. 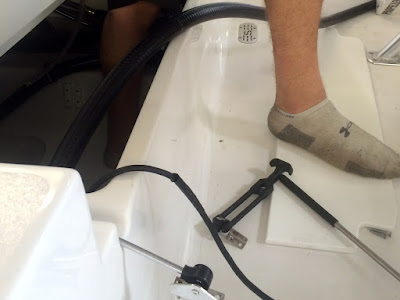 The plan was simple in theory but I know in practice the reality will be inevitably different. Disconnect the hose from the pump buried in the bilge, and in the console where it's connected to the bait well. A hose barb attaches the old hose to the new one. The guy in the back of the boat is going to crawl, sort of, into the bilge and pull the hose while his associate will push the hose at the other end. Easy peasy, but it doesn't budge. Muscles strain even more and it doesn't do more than stretch a bit and snap back.

Out comes a smart phone camera and after a couple of minutes and a dozen fuzzy photos later they realize the reason the hose won't move is its been tie wrapped and screwed to the stringer. This occurred before the deck was attached to the hull removing all access to the hose forever. This is where the painful conversations started with the builder. There are only two visible tie wraps. The choice is to find a way to do it, or send the boat back to the builder and let them deal with. It seems the latter is not an option. The boat is sold, and it needs to be delivered the next day.

With a mighty heave the hose is pulled, and the tie wraps break. The hose moves a couple of inches, but no more. Additional phone conversations verging on the hysterical occur. How is the damn hose routed? It seems it starts in the middle of the console, turns and passes through a notch in the stringer to the outboard side, where turns ninety degrees aft and goes back to the bilge. 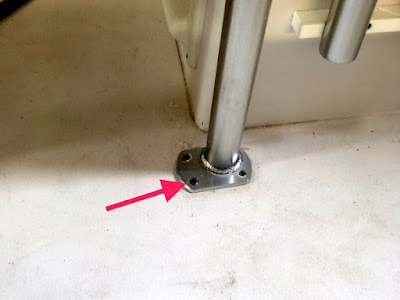 The two techs sit in the boat and digest this information. The factory is called again. "Where is this notch in the stringer located?" Why it's right at the front corner of the console just under the deck.

Flashbulbs go off, and a mental siren wails. A drill is snatched up, and all four screws are pulled out of the T-top leg flange. The hose is pulled from the back and it moves, not easily, but never the less it moved. About ten minutes later the new hose is worked through the boat. 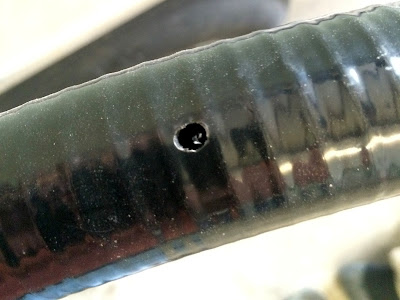 Two events had transpired to make what should have been a simple task excruciating. The first was tie wrapping and screwing the hose to the stringer. Did the builder ever contemplate its eventual replacement? Or did they figure the hose would last longer than the boat. I shudder at either possibility but figure the latter is far more likely.

The second event was even worse. the deck is only an inch thick, and the hose was just under the T-top flange. When it was attached the roid raged factory installer drilled the four holes in the deck, and one of those holes punched right into the hose. To make things worse 2" inch long screws were used and one of them filled the new hole pinning the hose in place. 1" screws are found and installed.

I don't know exactly how much the repair actually cost but 2 men at four hours each will be about $800 dollars in labor. A jury would probably add another $800 for punitive damages, I would have added even more, you can't fix stupid but you can charge for it.

If the dealer hadn't been so diligent in scrubbing the boat's defects this could have been easily overlooked. The buyer might have taken his new floating investment out into the Gulf to go fishing and and shortly afterwards the Coast Guard would have received a distress call about a sinking boat. This stuff just dives me nuts and is way too common. Poor design, tragic levels of inaccessibility for maintenance, and zero anticipation of aftermarket gear that will be installed. Pretty on the outside, butt ugly on the inside. The secret word of the day is.....

Con·duit
ˈkänˌd(y)o͞oət/
noun
1.
a channel for conveying water or other fluid.
"a conduit for conveying water to the power plant"
2.
a tube or trough for protecting electric wiring or plumbing.
synonyms: channel, duct, pipe, tube, gutter, trench, culvert, cut, sluice, spillway, flume
"Salt water entered the sunk boat through a leaking hose that wasn't in a conduit."
Posted by Bill Bishop - Parmain at 12:00 PM