How to hoist a Signal K flag

This whole event comes from an internal conversation with the core Signal K group about getting people to send in pictures of Signal K flags flying on their boats. They all have boats. I don't currently have a boat, that's completed at any rate.

As a bit of a lark I suggested I could hoist the SK flag as a tattoo. I figured this would be much better than hoisting my own petard by far. Then Rob outed me on Panbo. It was now real and printed using pixelated ink on my favorite marine electronics website for all to see. Okay, no worries, I can make this happen, and did.

It took some time for this idea to mature. What should it look like? Where should it be? Other than not on my forehead I wasn't sure. Did I care what others would think? Not a chance of that happening.

I sold my social conscience on eBay years ago and never looked back. As an aside another Signal K member has his "Tact" for sale and avers it's in like new condition because it's hardly ever used. You can get this for a good price if you're interested. 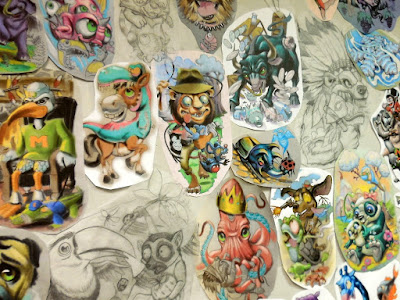 I just turned 63 and my birthday present from Kate was the tattoo. A consult was booked with Scott Olive from Oddity Tattoo. Scott is a very talented artist in his own right and has been doing tattoos for eight years now. He created Kate's star chart Orion tattoo that was the subject of another inky story.

He listened to my saga replete with my associated and expressive gesticulations. An appointment was set for the following Friday and he said he would think about the artwork in the meantime. 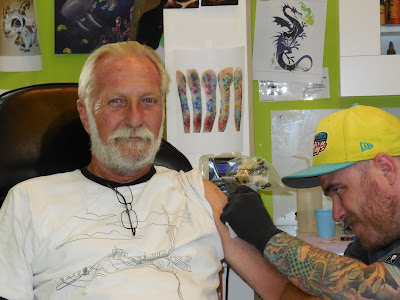 On a Friday afternoon I'm sitting in the chair and it's going to happen. Scott suggested the flag would look better if it was waving and I agreed. The Kilo was moved to the center and split into yellow and blue colors. The gear is readied, my upper arm is cleaned, and then Buzzzzzzzzz....

My first curiosity was, "Will it hurt?" The answer is not really, but you certainly know it's happening. That little needle is plunging in and out about 1/16" into your skin at very high rates of speed. You can see I'm not really distressed about this happening. 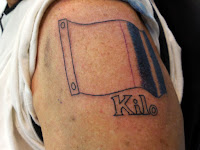 The outlines are done first. Scott is following the lines of a transferred template. If you look closely you can see a fine line that shows him where the flag will go from yellow to blue. We're about 15 minutes into the process. 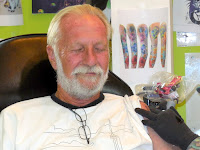 To be honest there was some mild discomfort when Scott was fading the colors. This requires quick sideways movements of the needle. I'm sure a version of Whipping Post by the Allman Bros was playing in my head at that time. 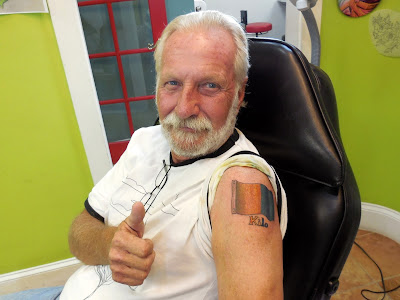 A fat half hour later and Scott is done. Children and those faint of heart avert your eyes, the old guy is sporting a cool tat. Other than some strange thoughts about buying a dew rag and Vespa scooter, I'm still the same guy.

I've also tried it out as way to impress the ladies. I have walked up to few I know, flashed the tat, and said "Hi babe, I wish to communicate with you." The confused looks, and grimaces lends me to believe this should not be repeated...ever. It was good I knew them well.

I've also noticed my left arm seems heavier now and I'm feeling a little off balance. I mentioned to Scott that maybe I need a tattoo of Dr Zoidberg on the other arm saying "What the party is over? What am I going to do with all my male jelly now?" Scott's eyes sure lit up when I said that. Xmas is coming. 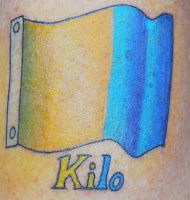 It's still healing and will be for another week and a half, and I have taken good care of it. This is a pic four days in and it's looking good. By the end it will look great.

You know I have to strongly believe in what Signal K is doing to bother with this. The project is going great. More notable hardware vendors have joined the effort and there will be some big announcements about this coming soon. The schema is being extended to map all of the NMEA data and then some. AIS data handling is being finalized. The team is now closing in on a stable version 1 of the server software.

Signal K is going to change the world of marine electronics far faster than most realize. Are you flying a Signal K flag, or sitting on the sidelines being a buggy whip? It costs nothing to learn more, so communicate with us.

I can't say enough about how impressed I am with both Scott Olive and Oddity Tattoo. Professional, hygienic to the max and very talented. I can't imagine there is a better place to get a tattoo period. Thanks Scott, I know it wasn't as much fun as some of your work but I'm grateful for the quality of your efforts.

The photo of the art work is the intellectual property of Scott Olive.

Photography by Kate Bishop, I was a little occupied.
Posted by Bill Bishop - Parmain at 1:04 PM