The radar has been elevated. Its gone from being nearly blind and has entered the world of the sighted. This was a most nuanced and detail driven job. It wasn't that it was physically hard, just every single damn aspect of this task was fiddly. Nothing was straight forward. Climb up, climb down. Go back to Ace hardware and stare into those little boxes containing a zillion parts looking for an answer. Climb back up, climb back down.

It was a screw up I briefly touched in a earlier piece. The problem was how to undo the damage, install a elevated radar mount, and make it look as close as possible to a factory installation. This took creativity, imagineering, and some classic MacGyvering to pull off.

The radar problem was missed by everyone. The boat builder didn't notice. The dealer and their tech didn't spot it, and the owner hadn't used the boat long enough to discover the radar couldn't see a broadside oil tanker a 100 yards away. I spotted it immediately, but that's what I'm paid for.

The very first problem was to get a mount and out comes the ruler. On the underside of the hardtop running down the center is a molded in wire channel. The good news is it's commodious. The bad news is that the flat portion of the channel is 4 1/2 inches wide...barely. The mount has a 5" bolt pattern. Crap, and this is just the start. 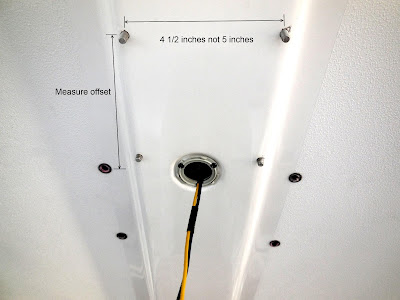 Okay, I can make this work, we're just going to need a little finessing to make it okay. A bunch of other things need to happen first. This one little detail drives a lot of other decisions.

Okay, now where to drill the holes? The radar has to come off first. This almost goes well until I discover there is zip in wire slack. The best I can do is to tip it on its side, hold it with one hand, and take off the power and then rats, the network cable won't pull off. Go back down, get a jewelers screwdriver, climb back up and remove the threaded locking ring. It still won't come off. Call Garmin, send them a pic, and no advice is forthcoming soonest. Back down for a bigger screwdriver and pry the sucker out.

When reason fails force prevails, and the bigger screw driver did the trick. Then I look at the network connector and discover there is no o-ring there to seal it. Go and get one. It's now lunch time, it's stinking hot so I'm not climbing back up on the damn boat for now.

What's next is grabbing some blue tape and the tape measure. There is a biggish hole in the hardtop the wiring was pulled through and I'm going to place the new mount over it. This means the radar is going to be about 5" further aft. I use the blue tape to make a line between the two aft original mounting holes. Then placing the mount where I want it I measure the offset. You got it, I then climb back down.

I locate the new hole locations, and do some meditation about the next steps. What I have to do is drill the holes up and angled ever so slightly off to the side. I'm starting with 4 1/2" on the underside and need to be at 5" when the drill bit pops out on the top.

The new issue is I know I can't do this exactly. I have to be however close enough for gummit work. My solution is to down size the mount bolts from the 5/8" ones I would normally use and go to #10 machine bolts.

The smaller diameter will allow me a greater margin of error. The nuts and washers will also be smaller helping me with the curved edge issue. Out comes the drill and bit. I carefully check the orientation, pull the trigger, and go.... till I run out of bit and still haven't popped through.

Despite all of the brain cells expended I hadn't fully integrated the concept that the radar is now further back and higher on the wedge, and I was starting on the channel making the hole even longer. Back to the truck to get a more manly bit and go at it. 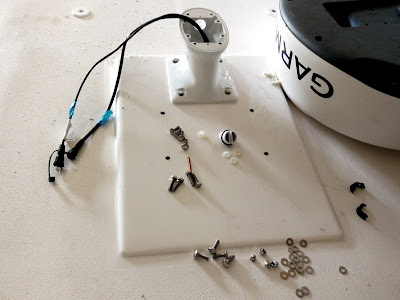 The drill gods were kind. The holes all appeared in the circles I had drawn up top, although a couple of them were close to the edges. I had anticipated this. The up top holes were back drilled with a 1/2" bit. This gave me enough play to make the mount fit properly. Climb back down and go for a couple of adult beverages. The day is done. 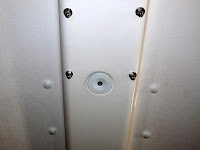 It's a new day, and an awkward start studying the new set of details. Out comes the micrometer and I measure the bolt lengths needed.

The Garmin radar studs had red goo on them so I'm replacing them with bolts which will look better anyway. I need short carriage bolts to fill the up top original hole, washers for shims, and something to fill the holes on the underside.

After a trip to two hardware stores methinks all is now well, but not quite. The mount goes on fine, but the radar cable doesn't have any slack and I need about six more inches. Pull underside plates and tug, maybe an inch is gained. Out comes the drill with a screwdriver bit. I remove, or at least try to remove a side mounted cabinet near the helm.

The screws come out but the thing is glued into place with some sort of sealant. Half an hour later and more implements of destruction dragged from the truck and I get it pried it loose from the bottom. Squeezing my scrawny ass inside the combing about 3' I cut a dozen tie wraps holding the cable. Pull a speaker for access and get about two feet pulled in. Go to the next plate and repeat this until I have the slack up top.

In the end everything gets put back together. It looks great and the radar works a treat. In retrospect the design is perfect for an open array radar, but is poorly suited for a dome radar mount because of funky dimensions and location of the wire channel underneath.

I had contemplated lagging the mount in place with the aid of epoxy on the bolts, but I was uncomfortable with the approach. The surface has about 1/8" of fiberglass over foam on top, and a thin fiberglass skin below that. I would have been happy with SS toggle bolts but they aren't available in the sizes I needed locally. So in the end I don't have any other ideas outside of fabricating a larger mounting plate with lots of screw attachment holes. Maybe the factory could test how well lagging with epoxy assistance holds. I suspect it will work. I just didn't want to be the one who found out it doesn't. Sixteen tons and what do you get?
Posted by Bill Bishop - Parmain at 4:53 PM