It was a boat engine hatch much like the one seen below. It was open and the boat was being worked on when the hatch lifter suddenly failed sending it crashing to the deck. The problem was a person was in the way. It took two frantic and adrenaline driven men to manually lift the very heavy hatch off him. An ambulance rapidly transported the badly injured tech to the local hospital's emergency room.

The medical expenses are in excess of $100,000 dollars and still accumulating. He will be off work for at least three months or more recovering. As horrific as this accident was, the good news is his prognosis for a full recovery is likely, and had he been in a slightly different place the falling hatch could have killed him. When a hatch lift fails catastrophically while you're under it you either get crushed or the edges of the hatch act like a guillotine. This event has given me more than some cause for concern. On any given day this could easily have been me! 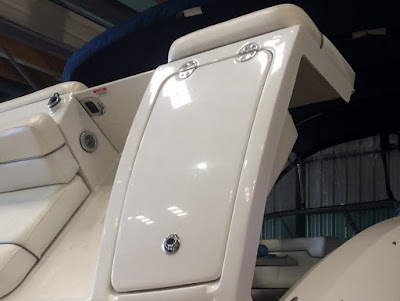 Why did the lift fail? No one knows yet. Somewhere downstream the reason will be found. It was not the attachment points to the boat that failed, but something inside the mechanism itself let loose allowing the hatch to plummet down.

So where was the safety strut? The answer to this question is there wasn't one, I spoke with ABYC and they have nothing in their specs that addresses the subject of hatch lifts and safety. There was no safety strut on this boat, and on too many boats this is the case.

So the next question is: Should there be a safety strut available on a boat that has a hatch that's heavy enough to hurt someone if the lift, or it's attachment points failed? I believe there should be and my injured colleague would agree. So why aren't there safety struts on more boats? That's the more complicated issue. 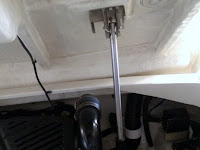 I looked online and found another case where the linear actuator had failed outright sending a large hatch crashing down, and several cases where the actuator attachments to the boat failed causing the hatch to fall.

Gas springs that hold hatches open fail too. It's easier to find injuries to boaters caused by these devices. I've been whomped by hatches poorly held open by gas springs myself. All gas springs will fail. It's just a matter of when.

These aren't complicated machines. Typically a reversible electric motor turns a screw using a low gear ratio drive train. As it rotates, the nut on the screw moves up or down depending on the motors direction. The nut is attached to the shaft moving it up or down with it.

The mix of a low gear ratio with a fine thread screw pitch makes it nearly impossible to mechanically back wind a hatch lift actuator under load. The low gear ratio on your anchor winch does the same thing. It makes difficult for your rode to play out under load, although not impossible as many know.

It's in general a solid design approach, but like all mechanical systems there can be failure points. In this case there was, and it was traumatic.

So how do we make things safer for boaters and the techs that work on boats? The picture shown using a boat hook is neither a safe or acceptable solution, but I would say it better than nothing...maybe.

Note how it's been extended. In a lifter failure the first thing that would happen is the boat hook would collapse to its shortest length and then you could only hope the hatch's downward momentum wouldn't buckle the rest of it.

I do have an idea. The first is to suggest that ABYC look at the issue and make some recommendations. I will write them a letter. I would start by looking at any hatch heavy enough to cause injury if the lift, or lift assist mechanisms failed. These should all have a secondary safety strut or restraint device with enough strength to carry the entire hatch load while in the open position.

There are solutions that exist. I have seen boats equipped with a SS pipe attached to a pivot point on the undersides of the hatch. It's held in place with a clip. When you open the hatch, you lower the end of the pole and place it into the hatch dam. You then lower the hatch enough to securely pin the pole in place. This couldn't have cost much to implement. Maybe about $50.00. So why doesn't every boat have one?

Now what do you do in the meantime? This is a more difficult question, but you now have some incentive since you know severe injury is possible. For boat owners you can open the hatch fully and make measurements for a support strut. This could be a piece of pipe, a 2 x 4, 4 x 4 or anything else appropriate for the task and load.

For techs and marinas this is problematic. Since every hatch has a differing opening height you can't keep a pile of 2 x 4's lying around to cut for each hatch. Something both strong and adjustable is needed. I found this little device that would be suitable for smaller hatches on the Rona Home and Garden website.

It shrinks to 2 1/2' and extends to 4' with a 110 pound load capacity. This wouldn't have worked on the hatch in question, but the concept is there. What's needed is a similar version that's adjustable, has mechanical detent locking and sufficient weight capacity for large hatches.

Another idea is to take to two square metal tubes/pipes with one nesting inside the other. Drill through holes allowing them to be bolted together at different lengths with rubber tips at each end.

For electrical hatch actuator owners and techs the next time you push that button and lift the hatch take a moment to consider the consequences of a lift device failure. Look closely at the lift. Is it in good condition? Does it make any weird noises. Have you lubricated it if required. Is the wiring in good condition?  Is it well attached?

For gas spring owners the same applies. Does the hatch open correctly? Is it too easy to close? Is there any pitting or rusting on the cylinders or pistons? Are the attachment points well secured? Hydraulic hatch lifts can fail also so the same applies to them.

In the end all hatches that are large or heavy enough to hurt you should have a sturdy safety strut in place when opened. Pay attention or Darwin will win.

None of the photos are of the boat or hatch lifter involved in the accident.
Posted by Bill Bishop - Parmain at 9:04 AM