Local fisherman John Yates prevailed in the Supreme court on Wednesday. The wheels of justice had eventually ground slowly and in this case coarsely. The revelation that a grouper isn't a record or document would seem to be a slam dunk but the case was never really about grouper. It was about words and how you interpret them, a most nuanced subject. Coursing through the veins of case was were issues of over criminalzation and prosecutorial over reach. Like all Supreme court decisions this one was replete with lots of Latin, and not oft used words like surplusage. 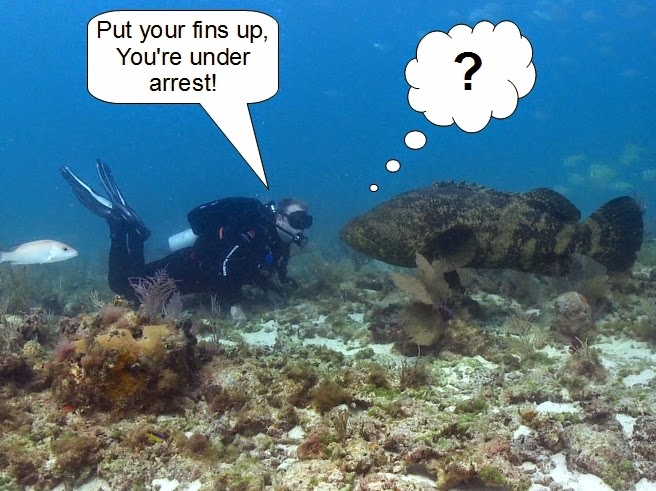 The entire case revolved around the two words "Tangible Object." Do you view it as natural language? In other words it's a thing that can be anything. If you will, if it quacks like a duck...

The other viewpoint is the interpretation of words depend on the context they are used in and the other words they are with. Sure it quacks like a duck, but it's really a platypus. The later outlook prevailed, but just barely in a five to four decision.

It almost seemed like the Justices colluded to create a compromise in which Yates would prevail, the overall interpretation of language tenets long held by the courts stayed basically intact, they demonstrated some empathy for the over criminalzation issues, and used a soft velour glove to gently slap the government's prosecutors. A vague sort of we get to keep our cake and eat it too.

Justice Ginsburg's opinion was a meticulously crafted although tedious read. She carefully and logically step by step builds the case the the duck is in reality a metaphorical platypus. I'm sure Mr. Yates concurred with her analysis.

It's the dissent that's more interesting. Justice Kagan's take is, if I was in charge a tangible object of course includes a fish as one. She states early in her opinion, "In my view, conventional tools of statutory construction all lead to a more conventional result: A “tangible object” is an object that’s tangible."  She doesn't seem to see any ambiguity to  be contended with here.

In reality she's not so black and white on the subject of how words are interpreted, and goes on, and perhaps more on to make her case, and does a good job of it. Then Justice Kagan surprises me.

Towards the end of her opinion she appears to chide her counter parts by saying, "Finally, when all else fails, the plurality invokes the rule of lenity."

Later she writes, "That brings to the surface the real issue: overcriminalization and excessive punishment in the U. S. Code. "Now as to this statute, I think the plurality somewhat— though only somewhat—exaggerates the matter. The plurality omits from its description of §1519 the requirement that a person act “knowingly” and with “the intent to impede, obstruct, or influence” federal law enforcement. And in highlighting §1519’s maximum penalty, the plurality glosses over the absence of any prescribed minimum. (Let’s not forget that Yates’s sentence was not 20 years, but 30 days.) Congress presumably enacts laws with high maximums and no minimums when it thinks the prohibited conduct may run the gamut from major to minor."

In the section I underlined she appears to be saying it's okay to have high penalties for an offense as long as there are no minimums. That's what judges are for (unless you ended up with Roy Bean). It's almost like she hadn't listened to the oral arguments. Here is an excerpt:

JUSTICE GINSBURG: You charged two offenses: 2232, and Yates is not questioning the applicability of that. Is there any guidance that comes from Justice to prosecutors?  I mean, the code is filled with overlapping offenses. So here's a case where the one statute has a 5 year maximum, the other 20.  The one that has the 5 year clearly covers the situation.  Is there anything in any kind of manual in 20 the Department of Justice that instructs U.S. attorneys 21 what to do when there are these overlapping statutes?

MR. MARTINEZ:  Your Honor, the...my  understanding of the U.S. Attorney's Manual is that the general guidance that's given is that the prosecutor should charge once the decision is made to bring a criminal prosecution, the prosecutor should charge the the offense that's the most severe under the law.  That's not a hard and fast rule, but that's kind of the default principle.  In this case that was Section 1519. 5.

Justices Ginsberg and Scalia both seemingly have real concerns about the penalties even if they don't have minimums, and the statutes used to apply them. The Government's guidelines that say the the most severe statutes should be applied when charging an individual in particular strikes a real nerve in Justice Scalia.

To me the real surprise was Justice Kagan continuing with "Still and all, I tend to think, for the reasons the plurality gives, that §1519 is a bad law— too broad and undifferentiated, with too-high maximum penalties, which give prosecutors too much leverage and sentencers too much discretion. And I’d go further: In those ways, §1519 is unfortunately not an outlier, but an emblem of a deeper pathology in the federal criminal code.

There was something for almost everyone in the opinions except for the government's prosecutors. Mr. Yates prevailed. He was not exonerated for his original alleged activities, but for the how and way he was charged. The court showed concern for both the criminalzation and prosecutorial over reach issues and Latin scholars had a field day. I'll leave it to someone else to pontificate on the weighty aspects of ejusdem generis canons in general.

You can read the 46 pages of opinions here. Pour a glass of bourbon, find a comfy chair, get your copy of Blacks Law Dictionary and prepare to pretend to be enthralled.

You can find my original piece about the case here.