Plan A:
Remove wiring from the winch along with the four corroded bolts from the deck plate. Whiskey Tango Foxtrot, nothing happens! Use a hammer and other nearby objects to encourage separation activities to commence soonest. Again nothing happens. Cogitate on a possible plan B. 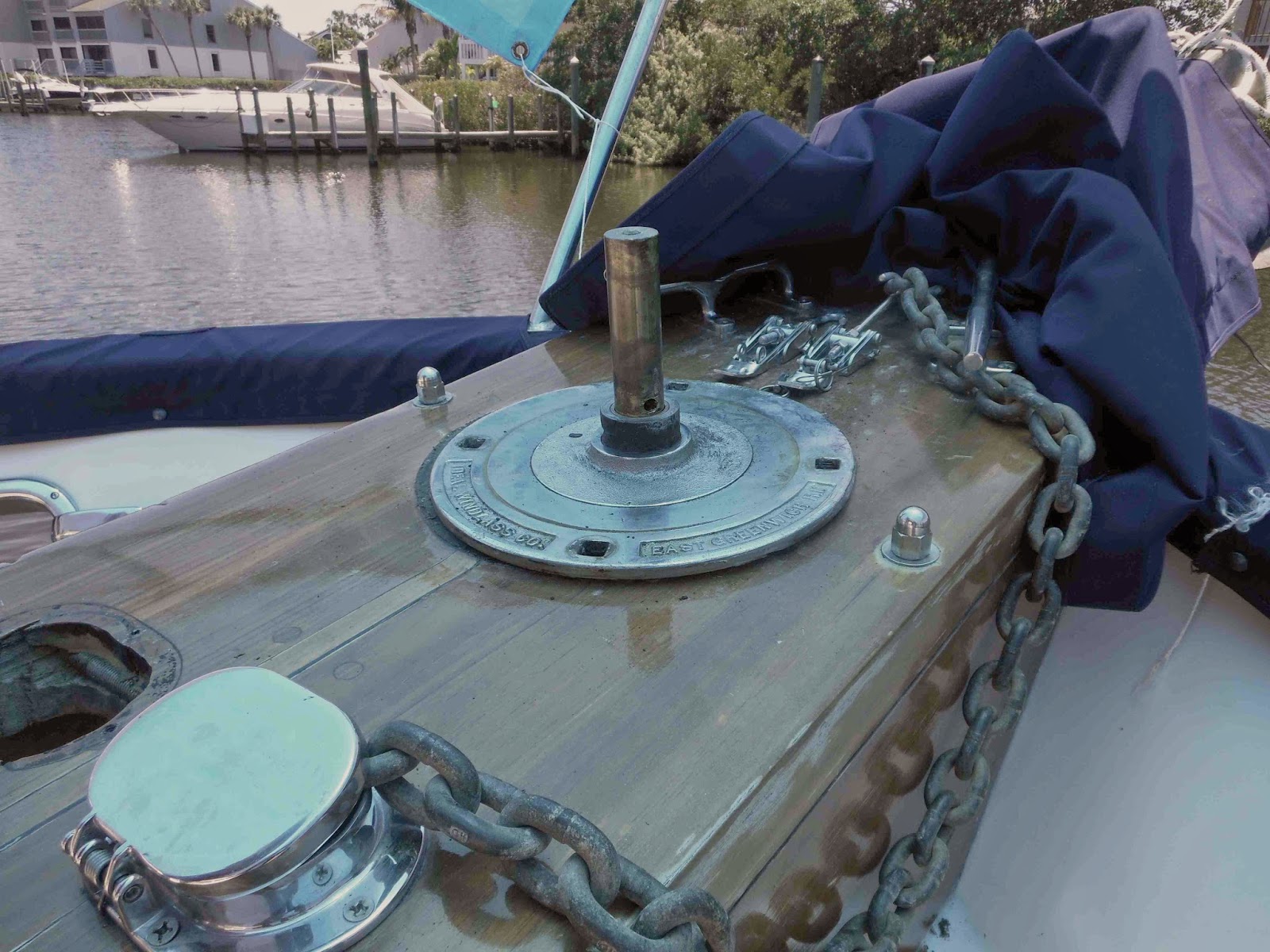 Plan C:
Study 30 year old drawings found on the internet. Maybe if the shaft was removed something might be different. Or least it would be easier to smite it with more substantial implements. Devise plan to remove motor, and collect the quart of oil that will inevitably spew out during the procedure.

Discover set screws hold a large gear to the shaft and there is nothing immediately available to remove said set screws. Smack it a couple more times with large hammer out of principle. 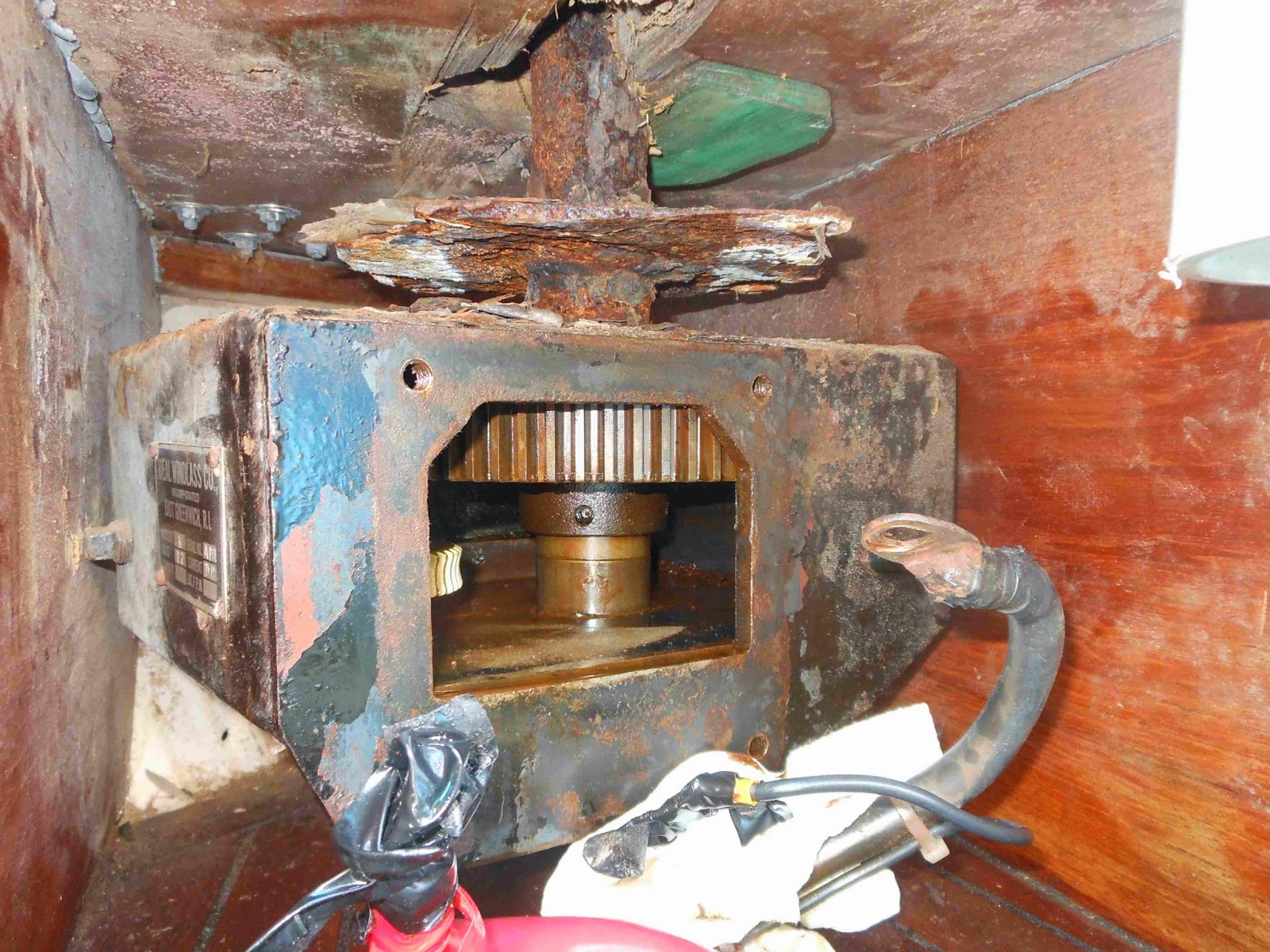 Plan D:
Return with a huge collection of small tools to remove set screws. Nothing fits, or seems to be even close. Snap close up high resolution pics to enlarge for viewing by creaky eyes later. Give it a few more whacks with the now ever present hammer. 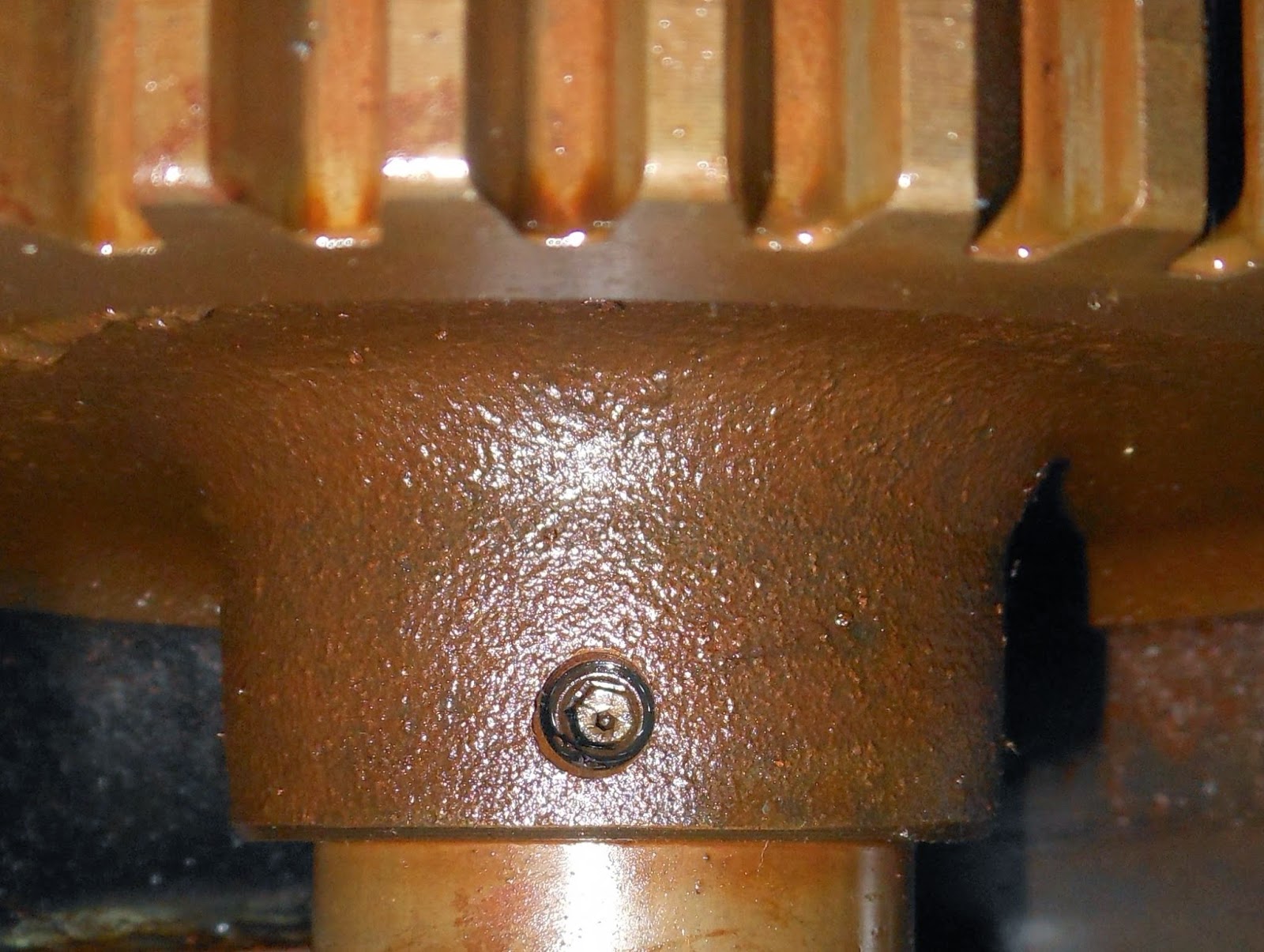 Plan E:
Study blown up pictures. The set screw appears to be a  hex key style but with a center pin reject feature. I don't have anything like this in my box.

Why would they use this? Were they afraid someone would steal the gear that's inside a steel box, immersed in oil, and accessible only by removing the motor first? The only other alternative is they didn't want mere mortals to be able to remove them.

Plan F:
Belatedly call manufacturer for advice. Conversation goes something like, "Boy that was a long time ago, I don't know for sure what they were using, but I remember using T handle wrenches. Yes, if not well sealed the steel outer shaft housing can rust and expand making it difficult to remove the deck plate. I heard some people drilled lots of holes around the center to release some of the pressure. By the way if you get the set screws out, this won't release the shaft, just the gear. 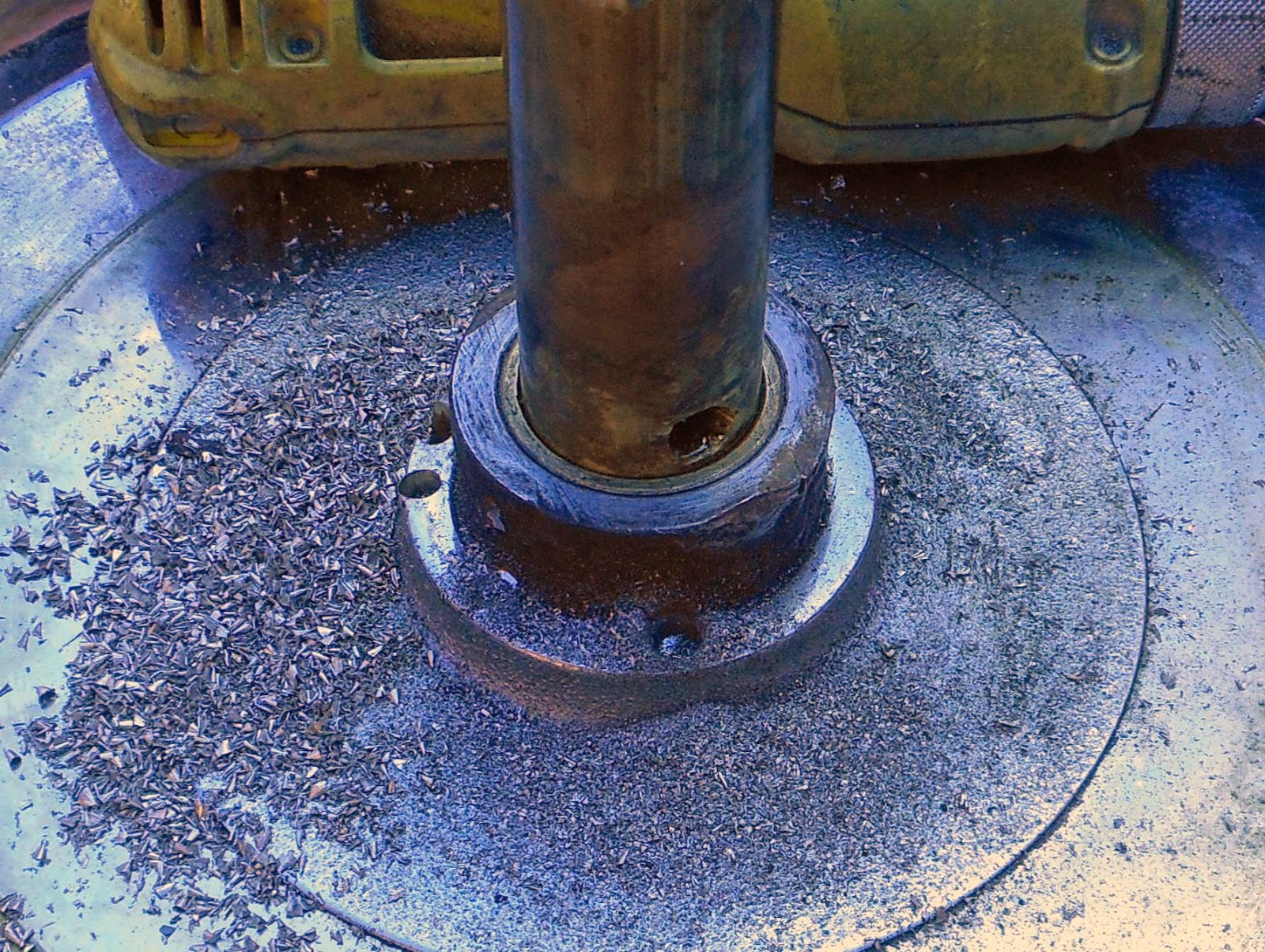 Plan G:
Drill holes around deck plate center ring. Doesn't seem to work well and give up after snapping off two drill bits, and making a mess. I won't live long enough to make this work. Seriously beat on the device with available heavy objects. This makes me feel better but there is no change in status. So much for Plan G.

Three vibrating blades later he cuts the through about 2" of steel and brass. A solid thunk is heard as the unit plummets the four inches to the deck. The priest didn't arrive in time to give last rites. 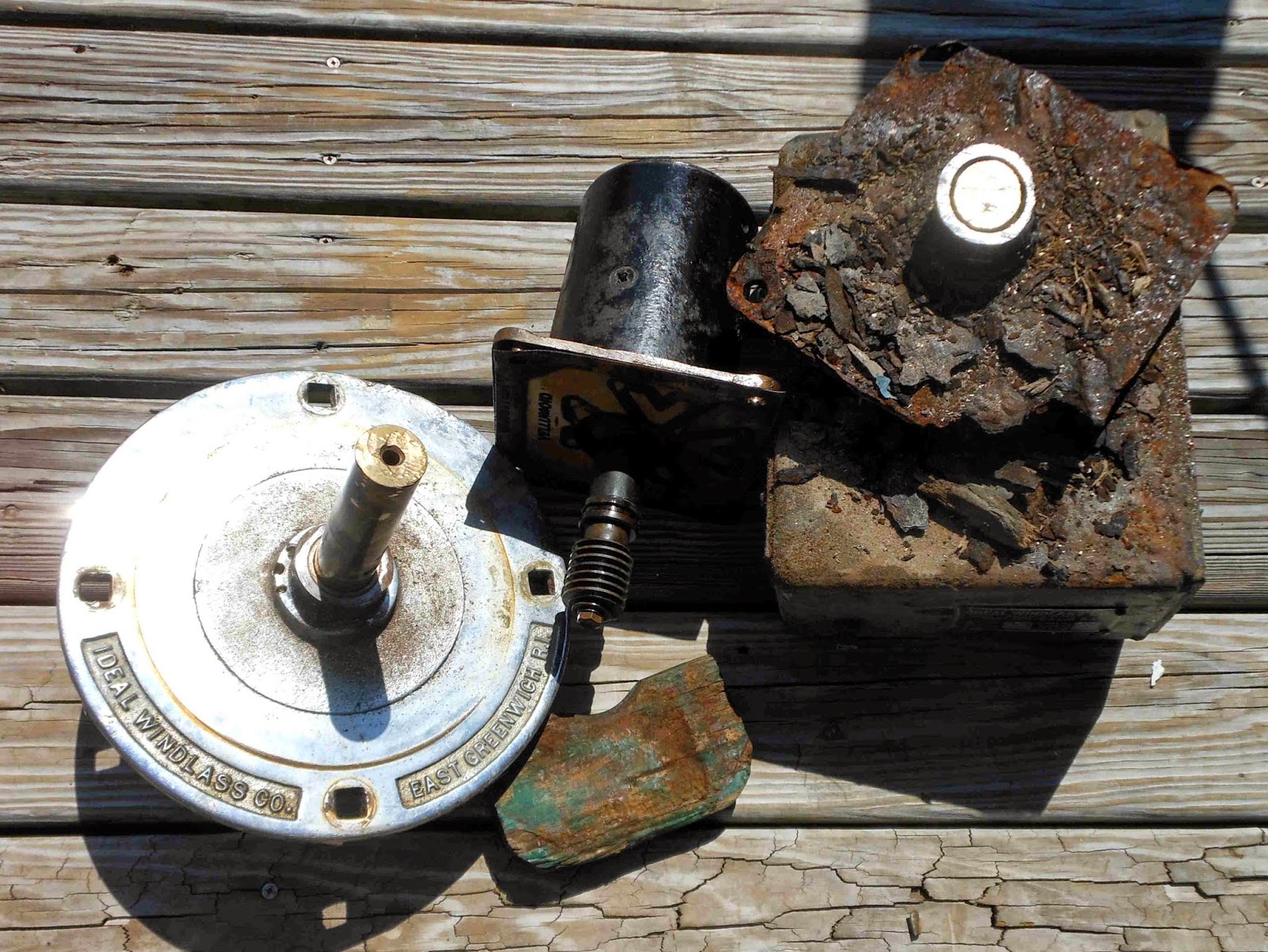 Plan I:
The remnants will get a dignified burial at the local scrap yard, after an ersatz associate breaks it down into its component parts. The working motor might be available for organ transplant.

This was a thirty year old model B capstan style Ideal Windlass, and the sturdiest and the most impressive piece of rode and anchor hauling gear I have ever seen. A simple and elegant design with very heavy duty moving parts. It was stil working perfectly but two things had happened.

The previous owner had neglected the deck plate sealing allowing water to get underneath causing the extreme rusting, and hence the ugly removal issues. The new owner also wanted to use all chain rode which rendered this device inappropriate for this task. A shiny new Lewmar winch is going to be installed. This has some notable challenges also, it's a boat. I have never gotten to a plan Z....... yet.
Posted by Bill Bishop - Parmain at 6:58 AM