I love boat shows. There's nothing like the sweet wafting odor of new fiberglass roasting in the Florida sun out gassing styrene. This was a good boat show, at least from the exhibitors viewpoint. In general, sales were better than last year and many more boats were being displayed. Although it doesn't match the halcyon days when you could get that fourth home mortgage to buy the vessel of your dreams, my sense is that most local dealers are now firmly back on solid fiscal ground. As one dealer told me, "It's good to be back in the boat business again." 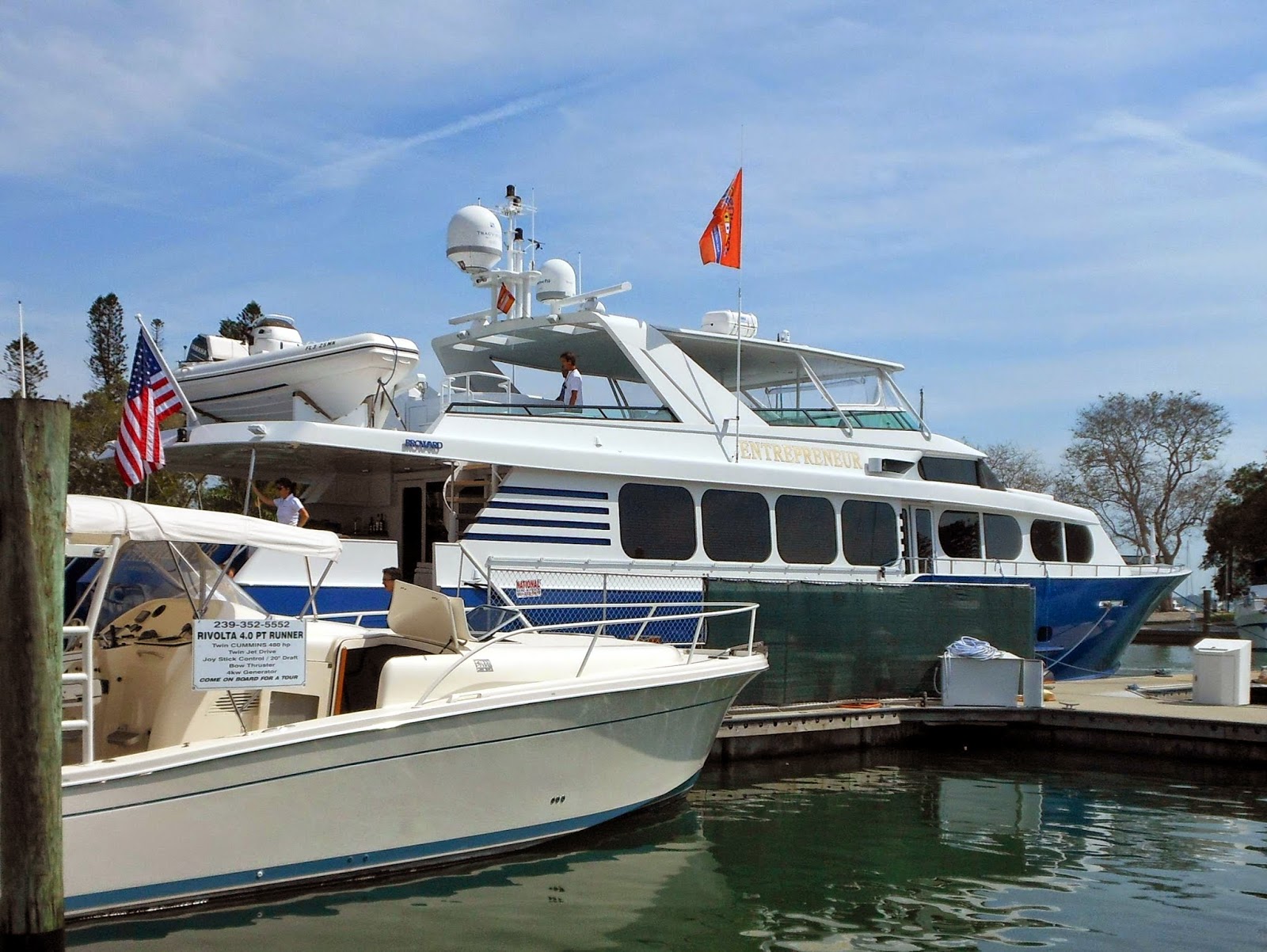 The largest boat in the show was our local congressman's 110 foot Broward named "Entrepreneur." Listings show an asking price a little north of $4M. To be fair it's owned by one of his companies, and there may be other investors involved. Why is it for sale? I don't know for sure, but I suspect the tax shelter benefits available to charter vessel boat owners have been all used up and it's time to move on. I don't see it out of port often so I also suspect the boat runs in the fiscal red side of the ledger all of the time. Pretty boat, but not quite my taste. 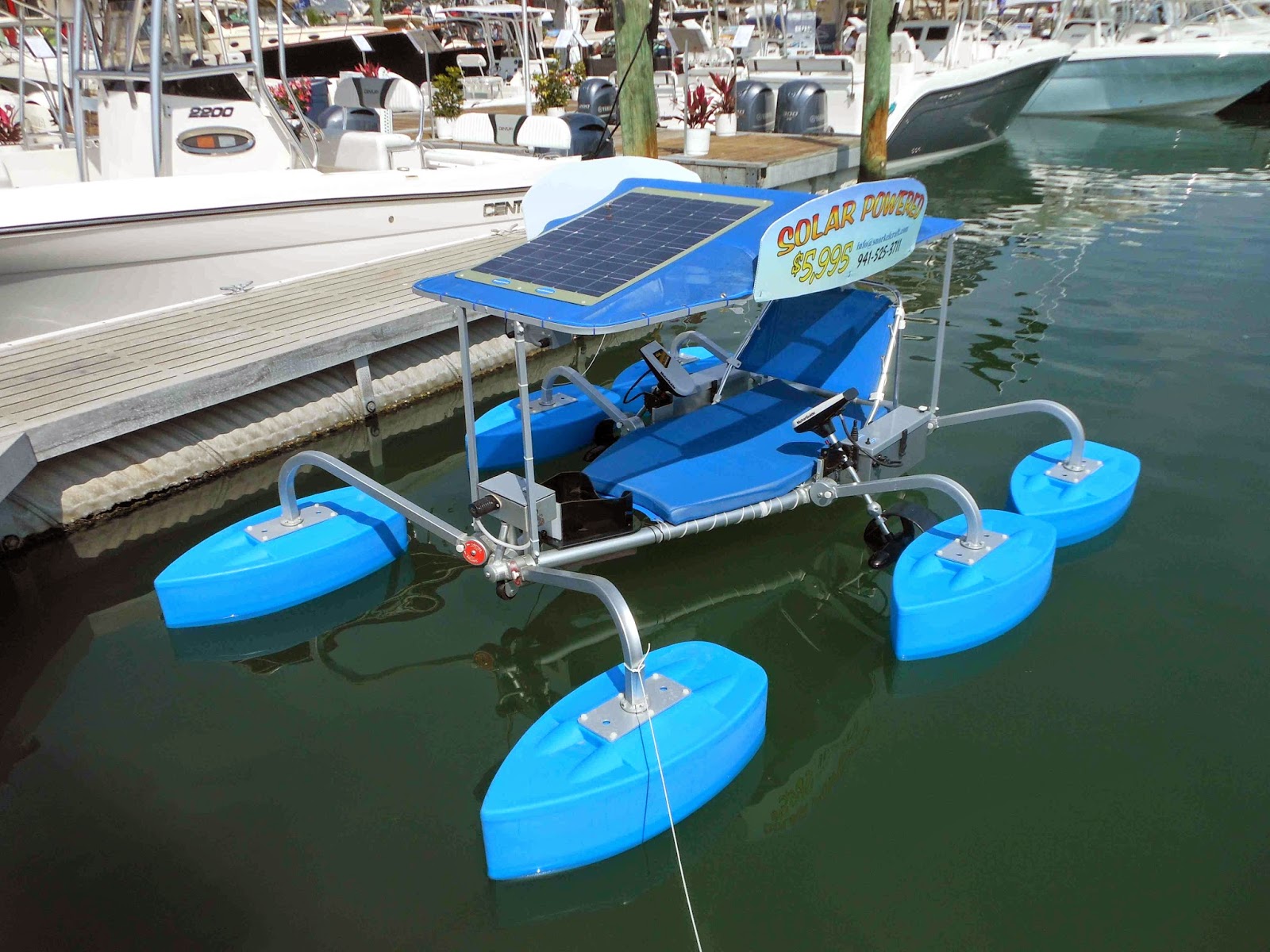 This clever, and at first glance decidedly water bug looking vessel is a "Snorkel Craft" and it's aptly named. What appears to be a floating chaise lounge for two actually has a surprising purpose and interesting capabilities. 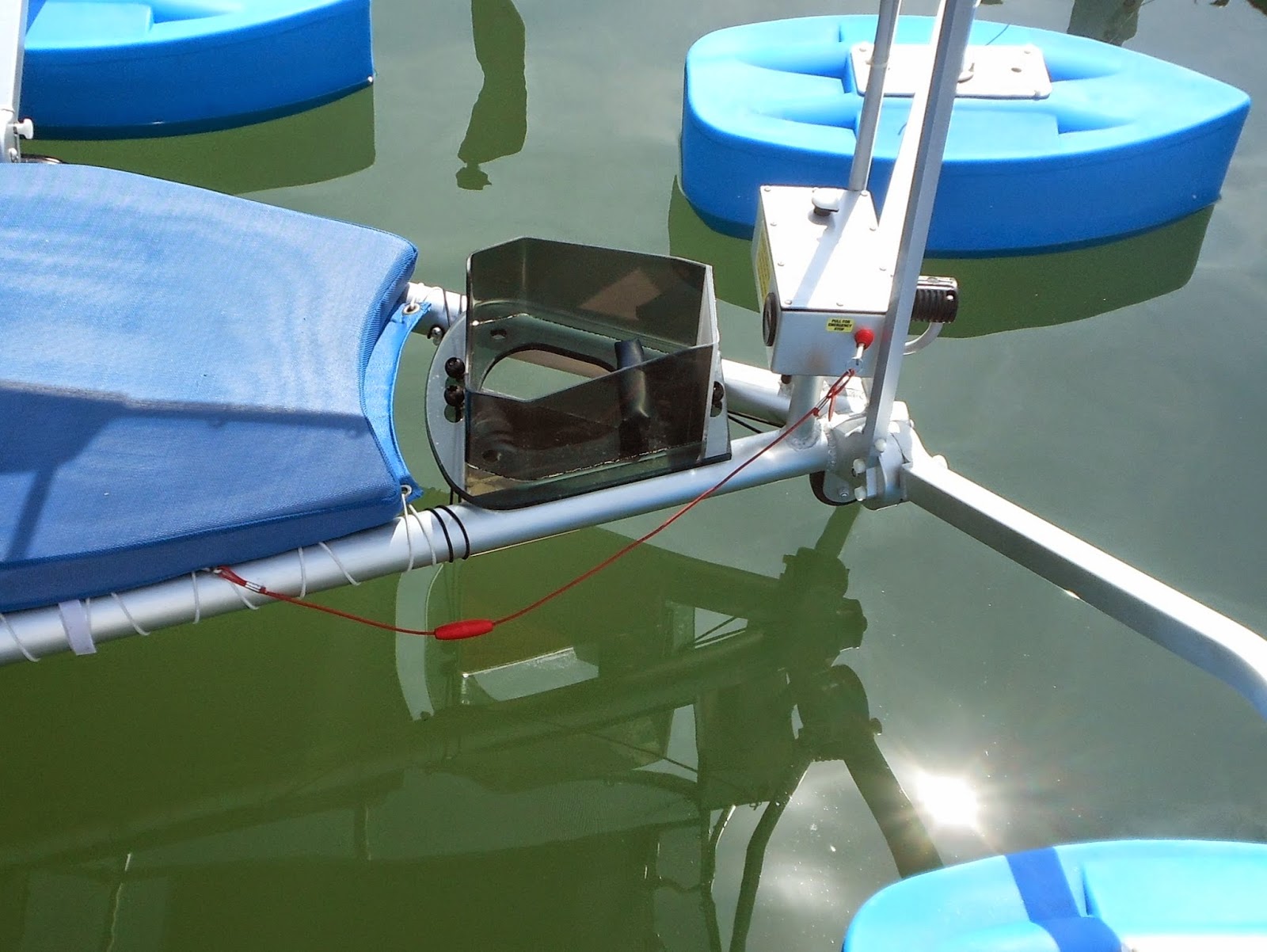 There is a gap under the seat back that allows you to lay down facing forward and look down into the water through a removable box with a pad for your forehead.

The little box in front has the battery charging port and system key attached to a lanyard. Under the box are two joy sticks to steer the boat. 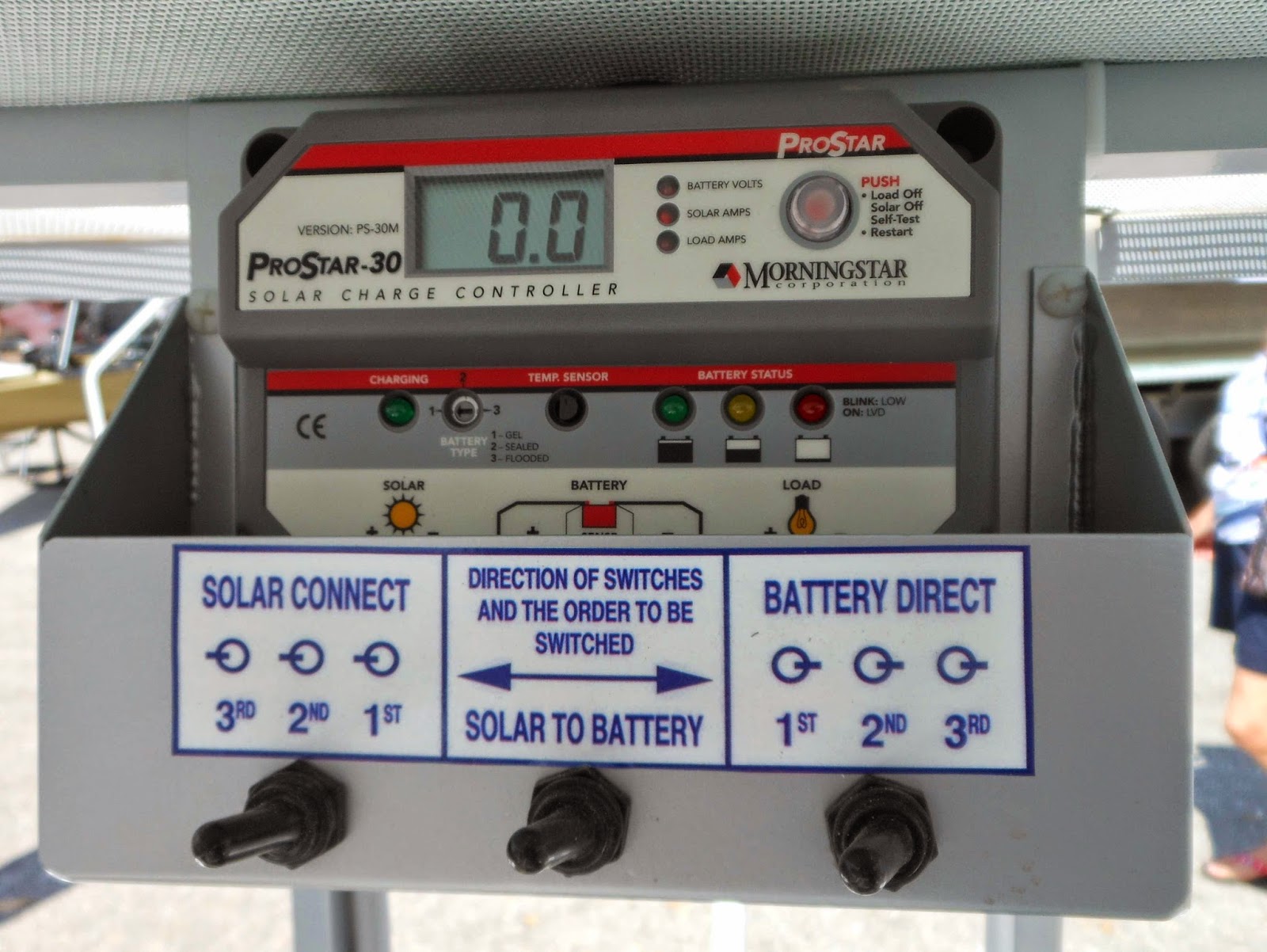 The two canopy mounted solar panels and the charging of the 4 AGM batteries are managed by a Morningstar ProStar 30 controller. You can view solar panel output amps, motor load amps, and battery voltage.

The Snorkel Craft is powered by two Motor Guide trolling motors with propeller guards. The structure is made of 6061 aluminum, and the sponsons fold up the reducing the very stable the 8' beam for trailering.

The Snorkel Craft has about a 10 mile range on a full charge, and will fully recharge in the sun in eight hours. I always look for something different at boat shows. This was my favorite in the show. Designed and well-built locally in Sarasota by Bill Wemesfelder it sells for about $6K. I could see myself lazing over a reef in the Keys looking for doubloons.

Your grandpa's lake pontoon boat with its rope pull start 20hp Johnson outboard is steadily being replaced by lavish floating living rooms capable of substantial speeds. Imagine the look on a SeaRay owner's face as you blast by him at 40mph+ with steaks on the grill and Jimmy Buffet blasting out of a plethora of speakers and over sized sub-woofers. 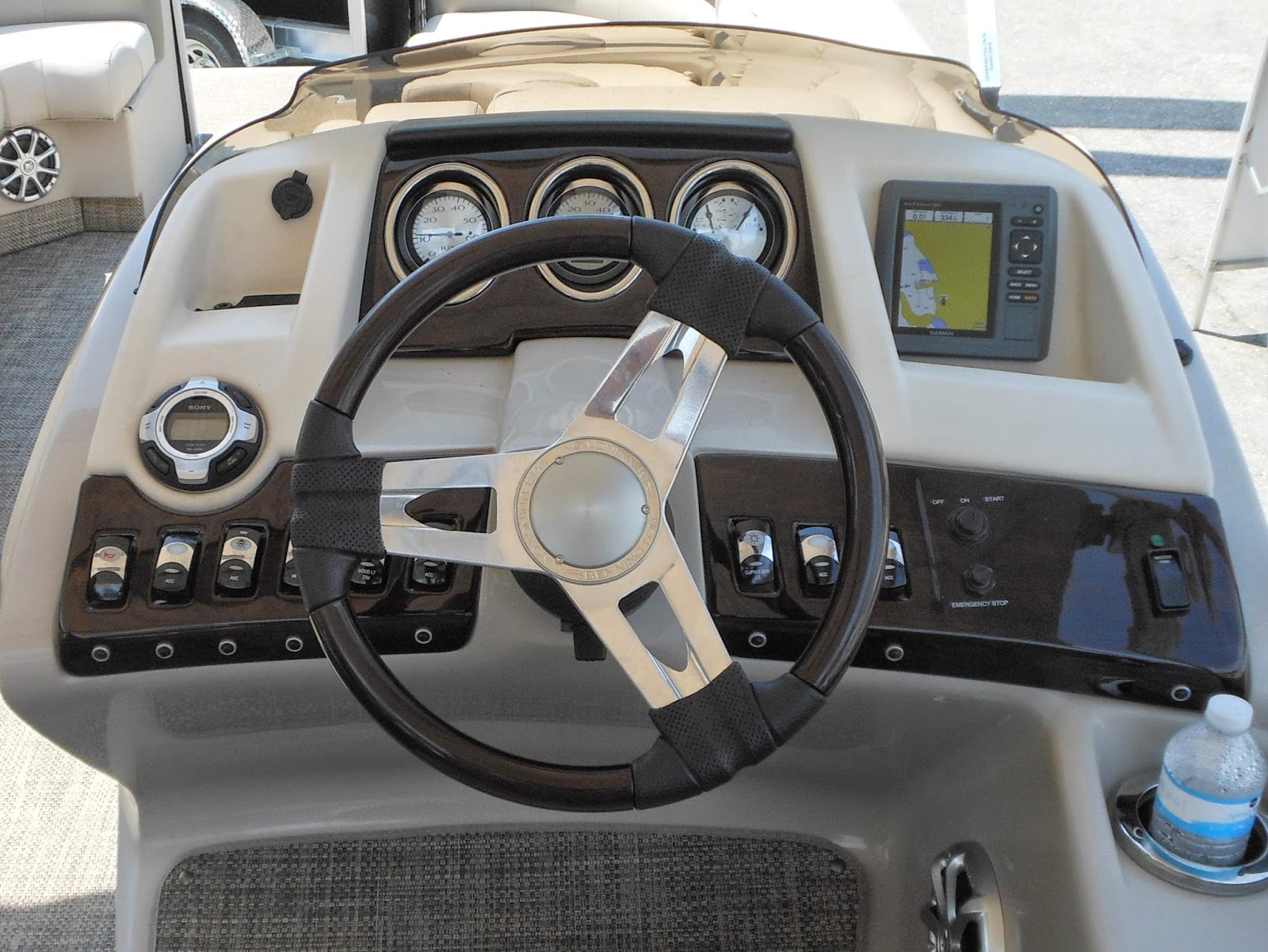 All kidding aside pontoon boats have come a long way. Consoles are now being designed to accommodate at least smaller chart plotters. They now just seem more boat like. I'll admit that in earlier days I scoffed when the subject of pontoons boats came up. No more. 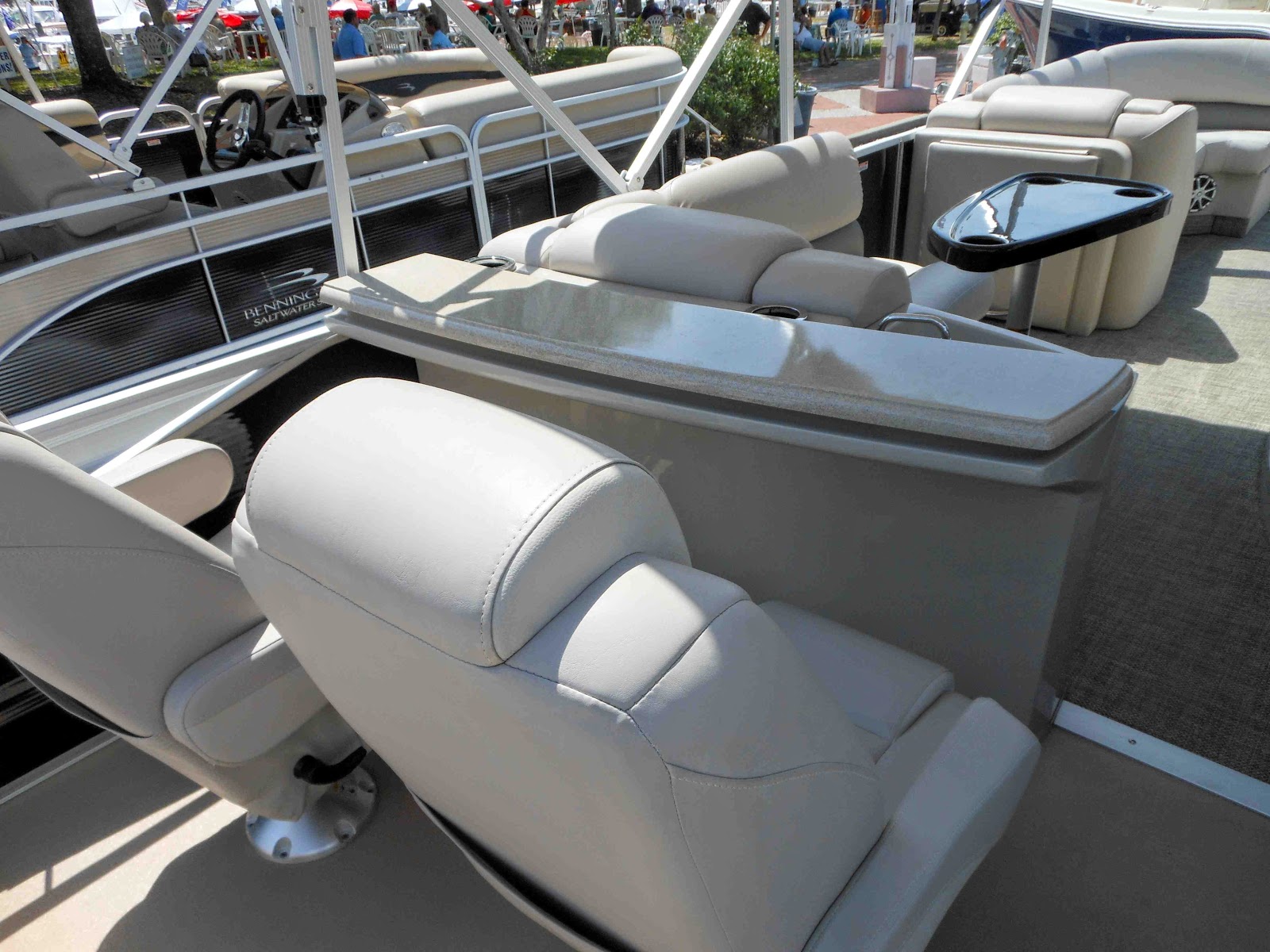 The hulls are now more sophisticated. Wave deflectors, lifting strakes and bows with very clean entries make them the equal of any fiberglass catamaran. But are pontoon boats ready for boating prime time? I think there is still room for development. I sense the fresh water lake environment mentality hasn't quite caught up with salt water's demands.

One of the things I noticed though is unfinished plywood is still being used for decking on the majority of the pontoon boats I saw, and I wonder why? Lightweight composite decking materials would be far more durable, and although they would bump the price a bit, it would also dramatically extend the vessels life span. So stop using it, or at least hide from me. If you have to use it at least put some paint, or better yet epoxy on it to make me feel better.

That was my only real grumble, and in reasonably sheltered coastal areas I would deem them as being safe, fast, stable, and fun to use on that metaphorical three hour tour. 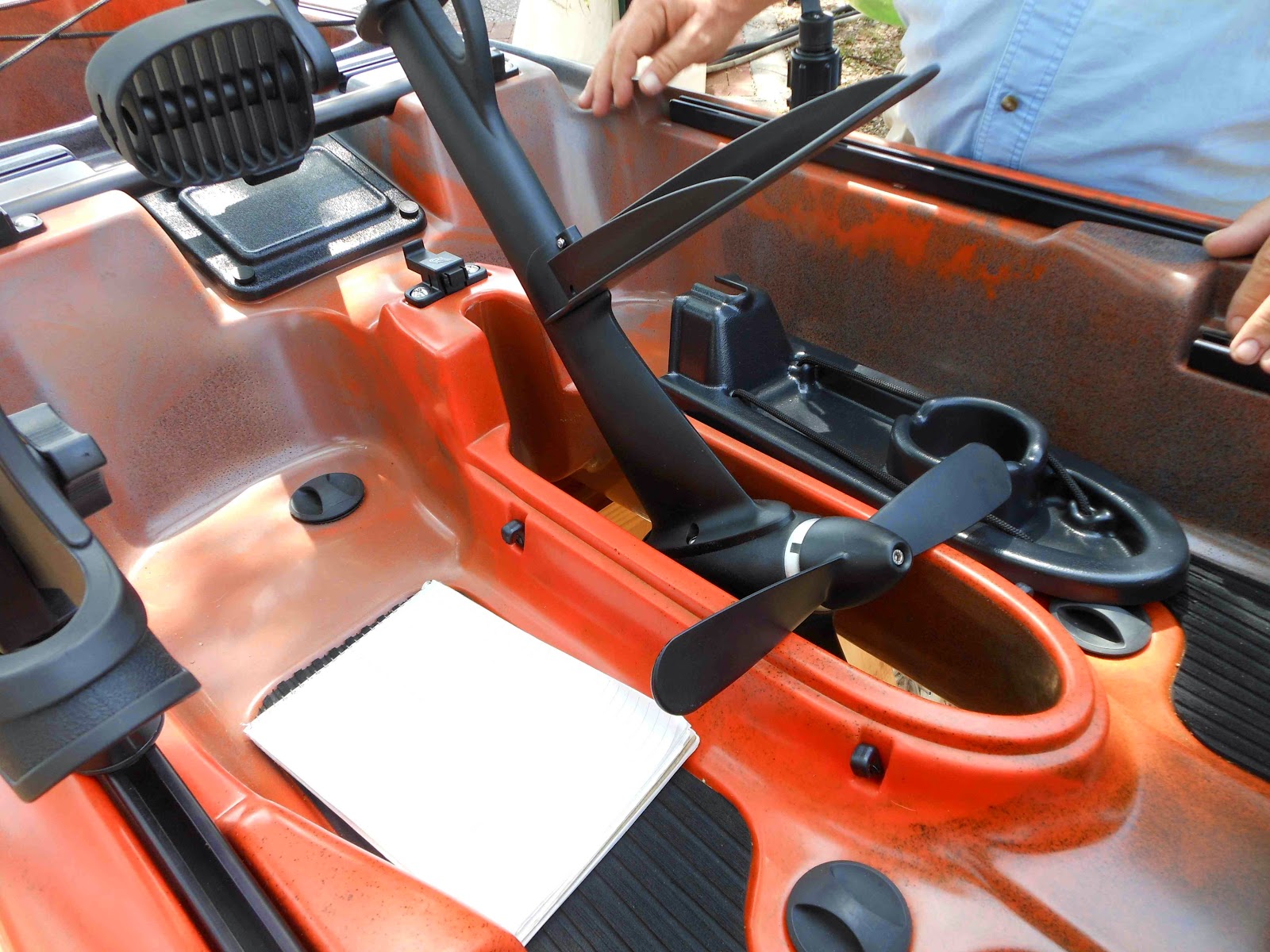 The endless miles of thin water flats on the west coast of Florida have made kayaks very popular. They are everywhere. I see them in Gulf fishing for Tarpon (I understand you can get quite a ride), on the flats looking for Red fish and Snook and dodging powerboats in the intercoastal waterway.

The thing that has become notable is the huge range of accessories that are now available. Cool things like the Native Watercraft retractable pedal drive system shown above.

Add to this list battery packs, coolers, anchoring systems, rod holders, a bimini and much more. I have even seen a picture of a Fusion stereo installed in one. Lots of vendors were showing off small personal watercraft including West Wall Boatworks who spent considerable time talking with me. 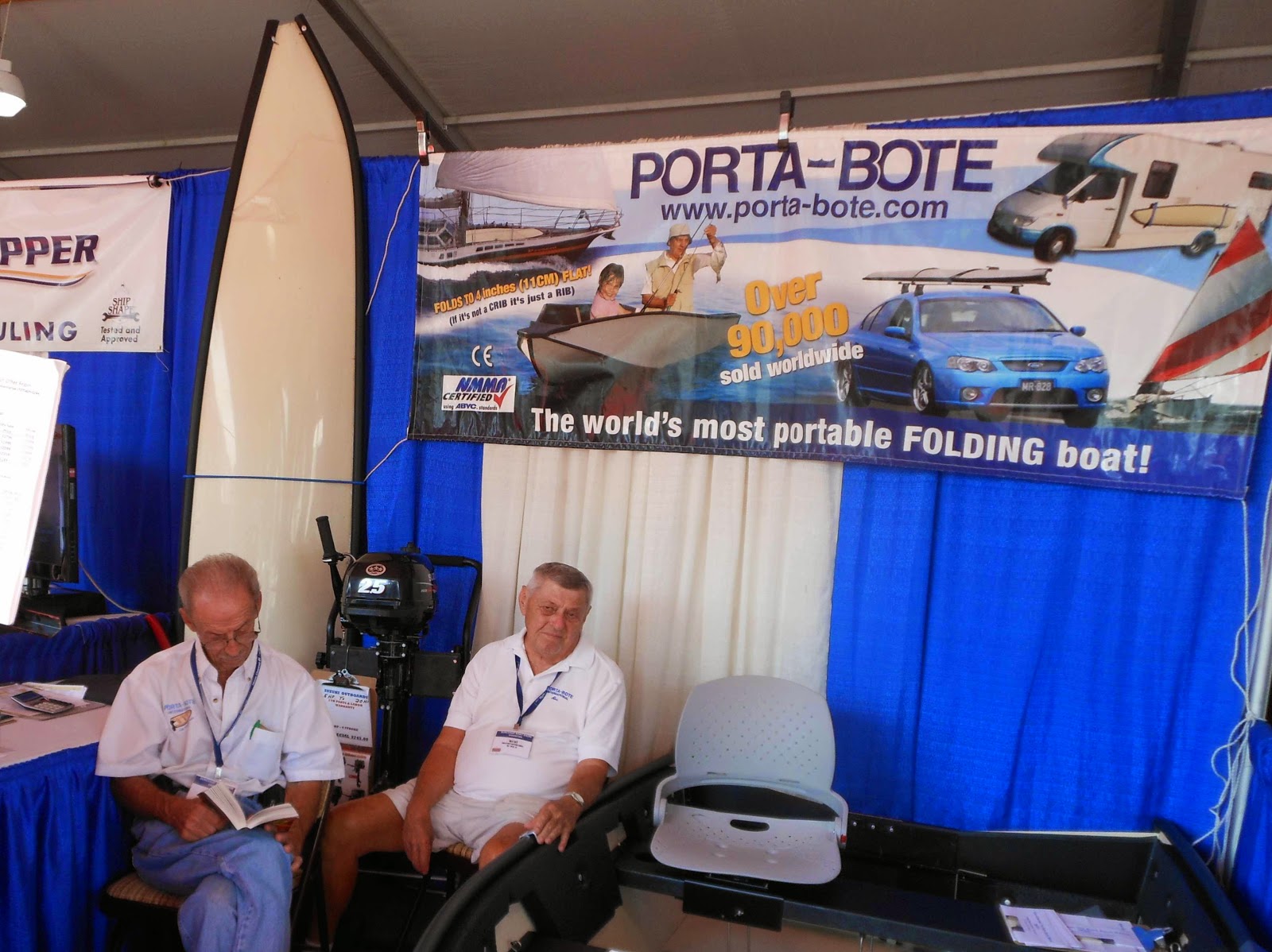 I went to the show twice. Right at the opening for an hour to scope out what was there. On Sunday I showed up around lunch time and stayed until closing.

I'll leave you with a view of the venerable Port-Bote kids late on Sunday. Like myself, I think they were done.

Oh yeah there were tons of shiny white fiberglass boats there also. I was suffering a bit from a mild case of Photokeratitis by the end of the day. Don't worry, a bourbon, or two my favorite dark and cool watering hole will rectify the condition.  FLIBS will be my next boat show, and the Shammy guy was AWOL. Someone thought he was in rehab recovering from a sniffing pleather addiction.
Posted by Bill Bishop - Parmain at 11:55 AM