Installing the new Garmin GCV 10 (Garmin Clear View) SideVü and DownVü  system is a snap, and well suited for DIY installers. As with most Garmin gear everything you need is in the box down to the wire clips (lamentably never enough of them), fasteners and other minor bits and pieces. Without further adieu find your floppy hat, grab your tools, count your fingers, and head down to the boat. 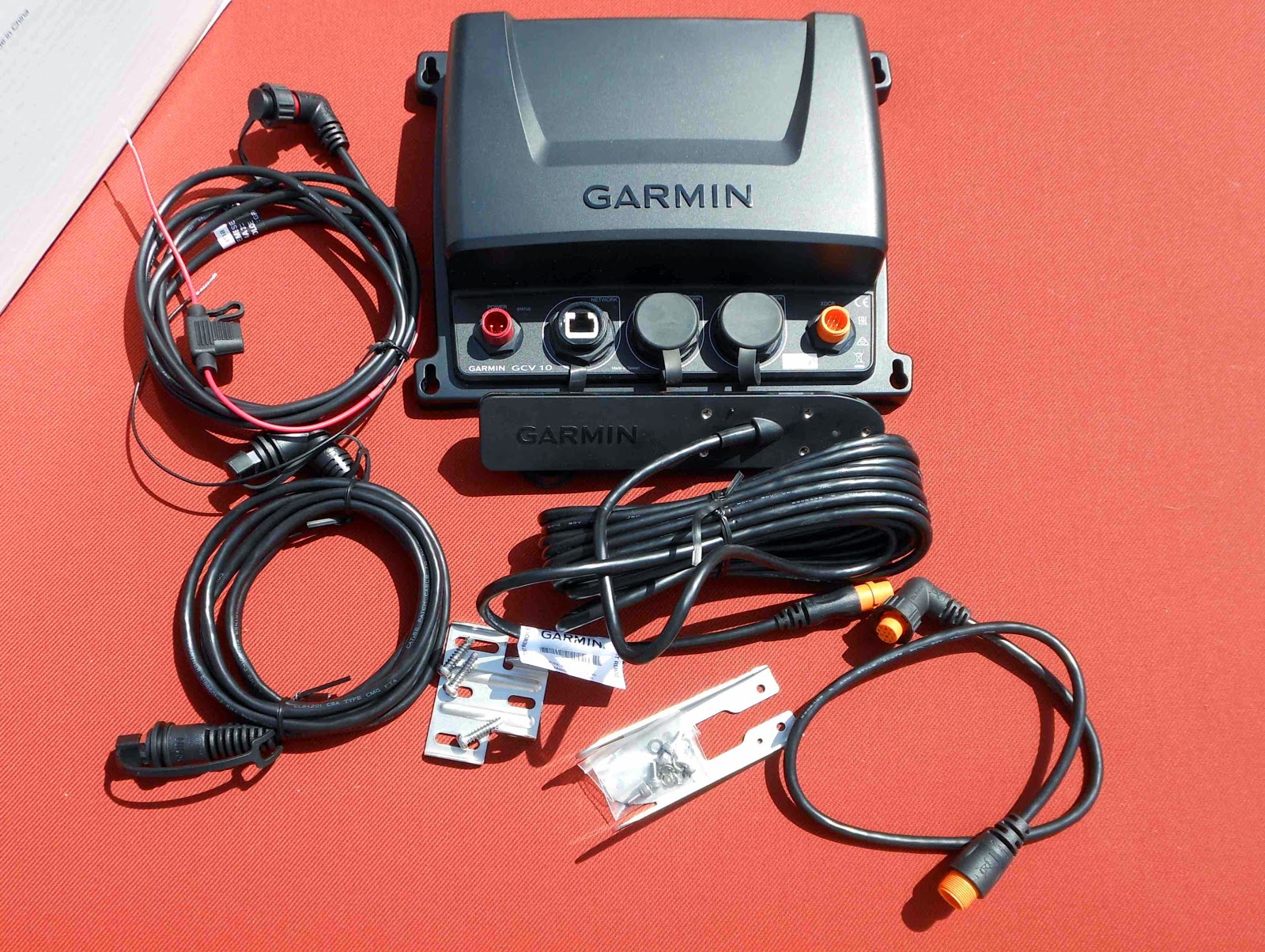 The GCV 10 box talks to your compatible Garmin display using its marine network Ethernet cable. There are three of these ports on the box. In this case I'm connecting it to a 741xs display that only has one network port. The GCV 10's other ports can be used for radar as an example.

A note before we start. The transducer for this system comes with a 20' cable. This is a 27' foot boat. This was almost, but not quite enough length to get to the console. You can't easily screw up the attachment of the mount to the transducer. There are two plastic guide pins to orient the mount base, and if you can screw in the five hex head bolts with supplied washers and Allen wrench you've done it right. Assembled it looks like the photo to the right. Don't over tighten the transducer mounting bolts, and tighten the two mount pivot bolts so you can still adjust the mount angle by hand, but no more that that. 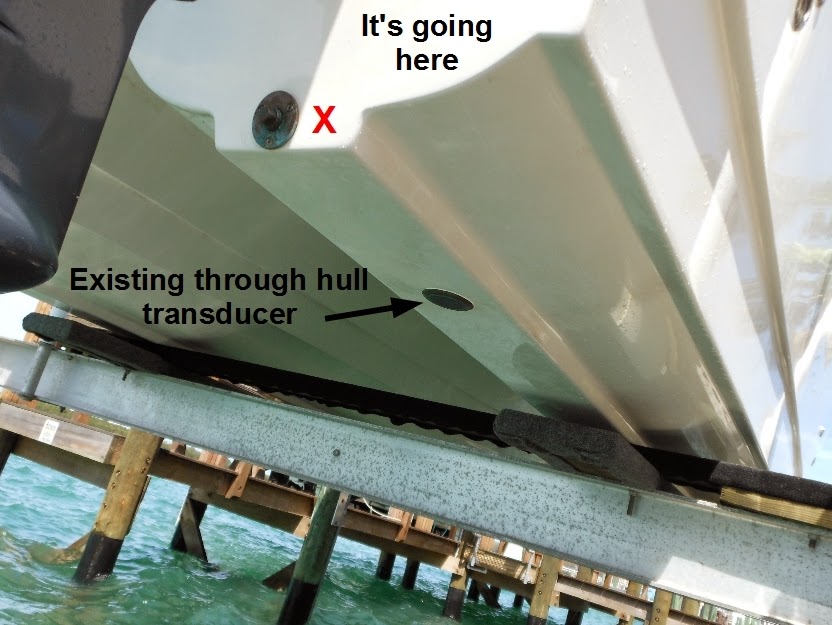 Getting down/side scanning technology to work well requires getting the transducer into a good location and proper orientation. The red X is marking where this transducer cannot go for a couple of good reasons.

Although at first blush the red X location looks good, it isn't. In forward of it is the through hull transducer. It's low profile, but not low profile enough. The downstream turbulence will affect any transducer in it's slipstream.

Catch number two is this is a power catamaran, and you need to treat this this configuration like it's a single outboard engine boat. Placing the transducer too close to the engines center line can cause cooling water pick flow disruption, and or prop cavitation problems. Look closely at the engine setup before using this location.

As a last comment on this location issue you generally want on most installations to have the transducer on the prop's down stroke (mostly but not always right) side if possible. No matter what you do these, and other transducers can create rooster tails on fast high running flats style boats. They still work well, and you can tell your friends about your new surface piercing drive. If this happens you want to make sure that the rooster tail is outboard of the engine, and not showering it in salt water. You could also go slower, just kidding!

My compromise was to split the difference on that curved portion of the hull. Mine is mounted so the inboard top of the black transducer side is about 1/8" below the hull. The outboard side is about a fat 3/8" below the hull. Remember you have transducer arrays on the sides of the housing that have to be in the water. I will give you a link at the end to let you learn more about the transducer itself and the technology. This worked out to be a really good spot for this boat. Like I always say, "Selecting a good transducer location is a Zen thing." Ah yes, the string theory thing you see going on. I'm installing this transducer with my aft end perched on the edge of the seawall, and when needed one bare foot with toes is precariously grasping the lower engine housing.

Normally I'm behind the boat, and it's easier for my eye to pick out vertical. From my angle on the seawall not so much. To get a nice straight pleasing to the eye cable run up the transom I ran a string from the transducer to the transom and taped it at the top. I could then get twenty feet or so back away from the boat, grab a piling, lean out, and give the line my best evil eye.

It took about three passes at this before I was happy, and using the string as a guide drilled the cable clip holes. This also works well when you have a longer cable run and want it to look and be very straight. I didn't invent this masons have been using this technique for centuries. 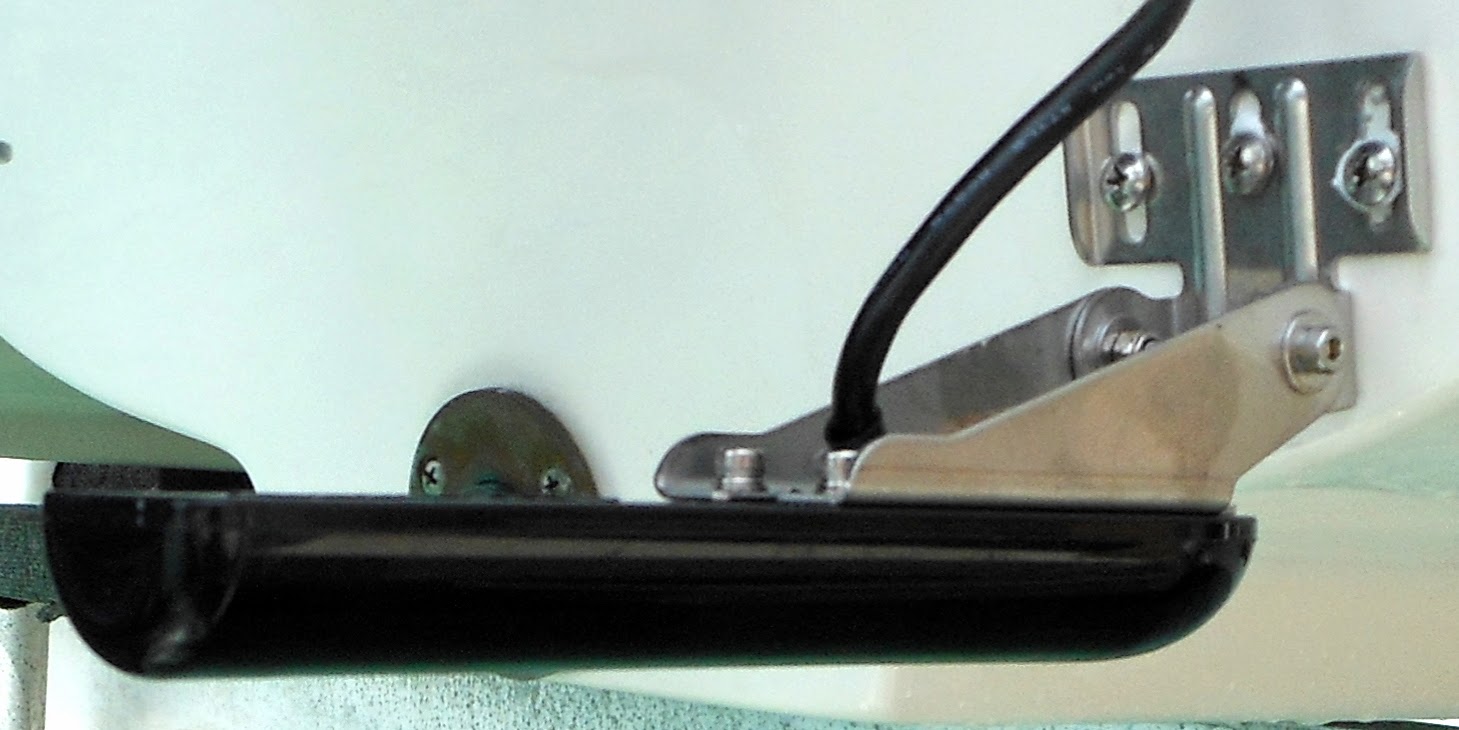 Before you attach the cable to the transom, find that supplied Allen wench, and a nut securing tool. Adjust the transducer angle so it's parallel to the waterline, and tighten the pivot bolts.

Parallel to the water line you say? This is a bit subjective. If you're off a few degrees, no one including you will really know. If your boat has a notably high bow angle while running you might want to start with the aft end of the transducer lilted up a touch. For most boats having the transducer parallel with the hull is a good place to start.  Now you can attach the cable clips. 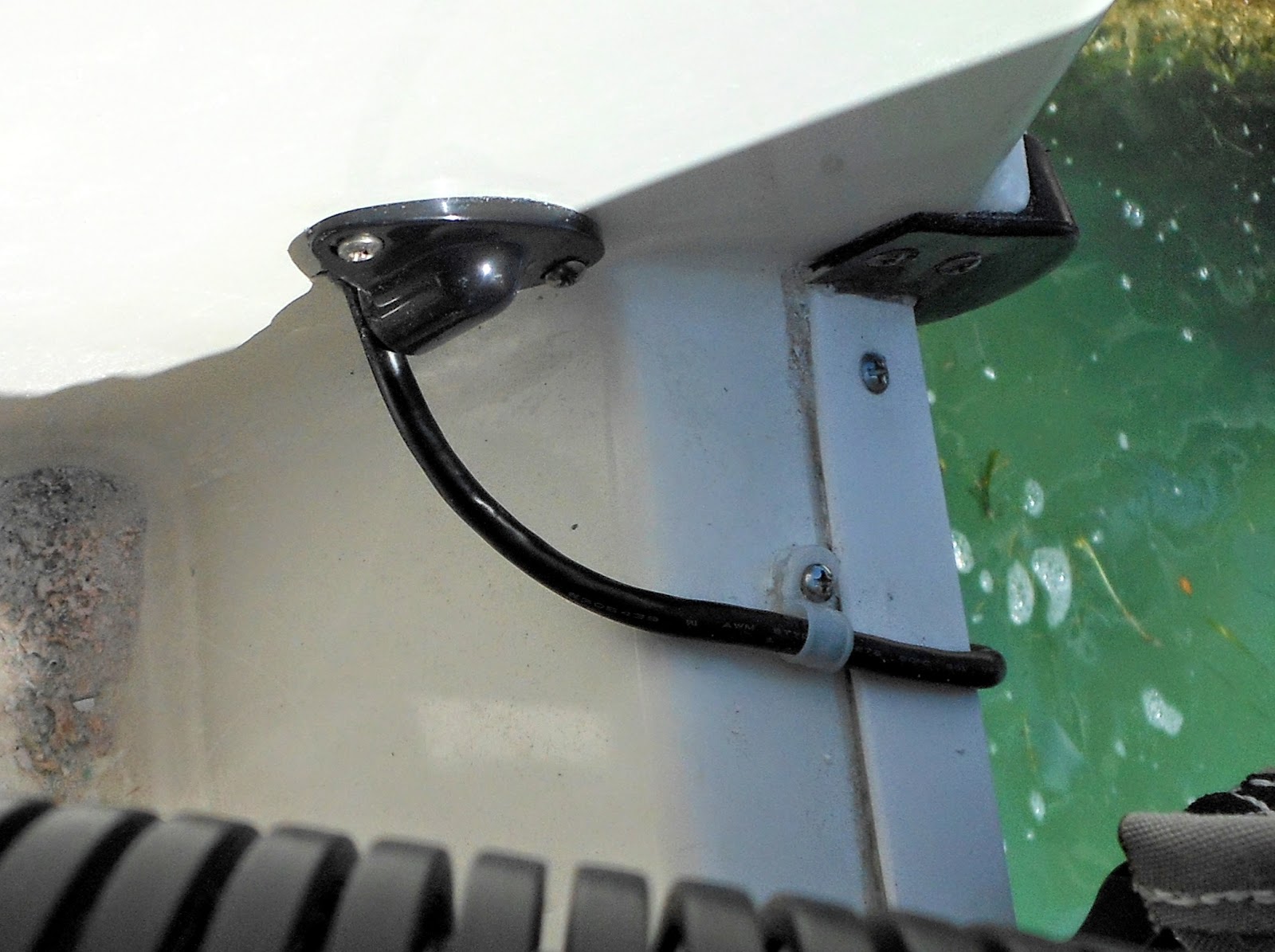 If I can route the cable in such a way to avoid drilling a hole in the transom, it's always my preference. In this boat a transom pass through hole would have been very close to the water line, if not below it. I routed the cable over the top of the transom, and punched through into the transom well's coaming. An hour of an ugly two stop wire pull passes before the cable is at the console. Mounting the GCV 10 black box is a piece of cake. Throw the very long supplied mounting screws in your spares kit and dig out four shorter screws more appropriate for the task. Attach the box. Plug the transducer cable into the supplied pigtail, and plug the pigtail in. It can only fit in one location.

Plug in the power cable with its inline fuse, and connect to 12/24VDC juice. Jack in the in the supplied network cable (6') at each end. Use the supplied software and upgrade the display, or even better download and do the update with the latest version software. Count your fingers again. Got them all? If so you're officially done. Go play with the new gear now. There is lots of sea bottom to explore with a clarity that will amaze you. 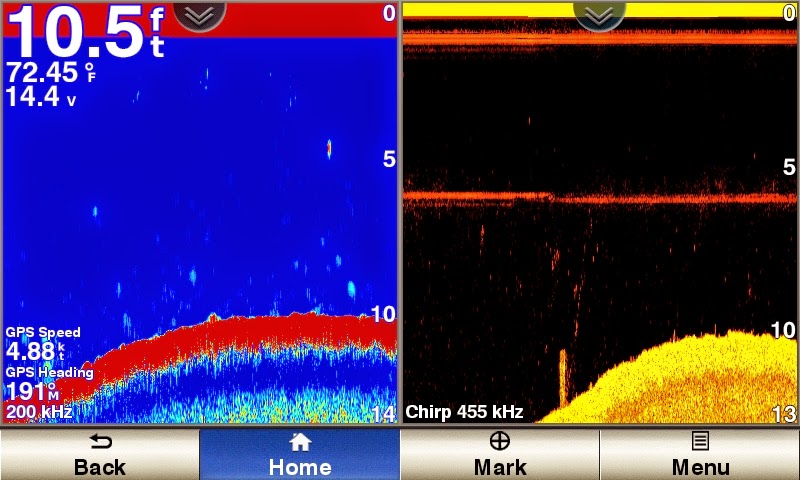 This system worked perfectly out of the box and many thanks to George Pintea, the owner of this boat for his patience with this exercise. You have met another one of his boat's before in one of my stories.

It's a coincidence that in that story on the very same day Ben Ellison was in a very similarly equipped boat also fishing in the Gulf of Mexico. The pieces shows both of us proudly displaying a fish we caught. Like that story this one also has an interesting Panbo link. I don't do product reviews on this site, but I have just done my first one on Panbo. A new voice wearing the same fashionable and snappy Panbo chapeau.
Posted by Bill Bishop - Parmain at 11:01 AM