It was an exhilarating experience to see the drawings from his notebooks come to life, and at the same time a bit of a disappointment at its execution and interpretation. Leonardo da Vinci's machine's exhibitions exist and travel all over the world. I had the recent opportunity to visit one.

Featured at almost all these exhibitions is the simple paddle boat with the "invented by da Vinci proclamation." I wouldn't take anything away from Leonardo's impressive capabilities but I think that he did three things with extraordinary skill. He combined existing technologies to conceptually solve problems to make a living, was an astute and curious observer of the world around him and he meticulously documented his findings. This left behind a legacy of about 5000 pages of notes, drawings, and a remaining small handful of paintings.

So did he truly invent the paddle boat? I think not, that really happened in the 5th or 6th century. What he did with the paddle boat was to document the technology, understand how it worked, and put effort into figuring ways to power the contrivance more efficiently. 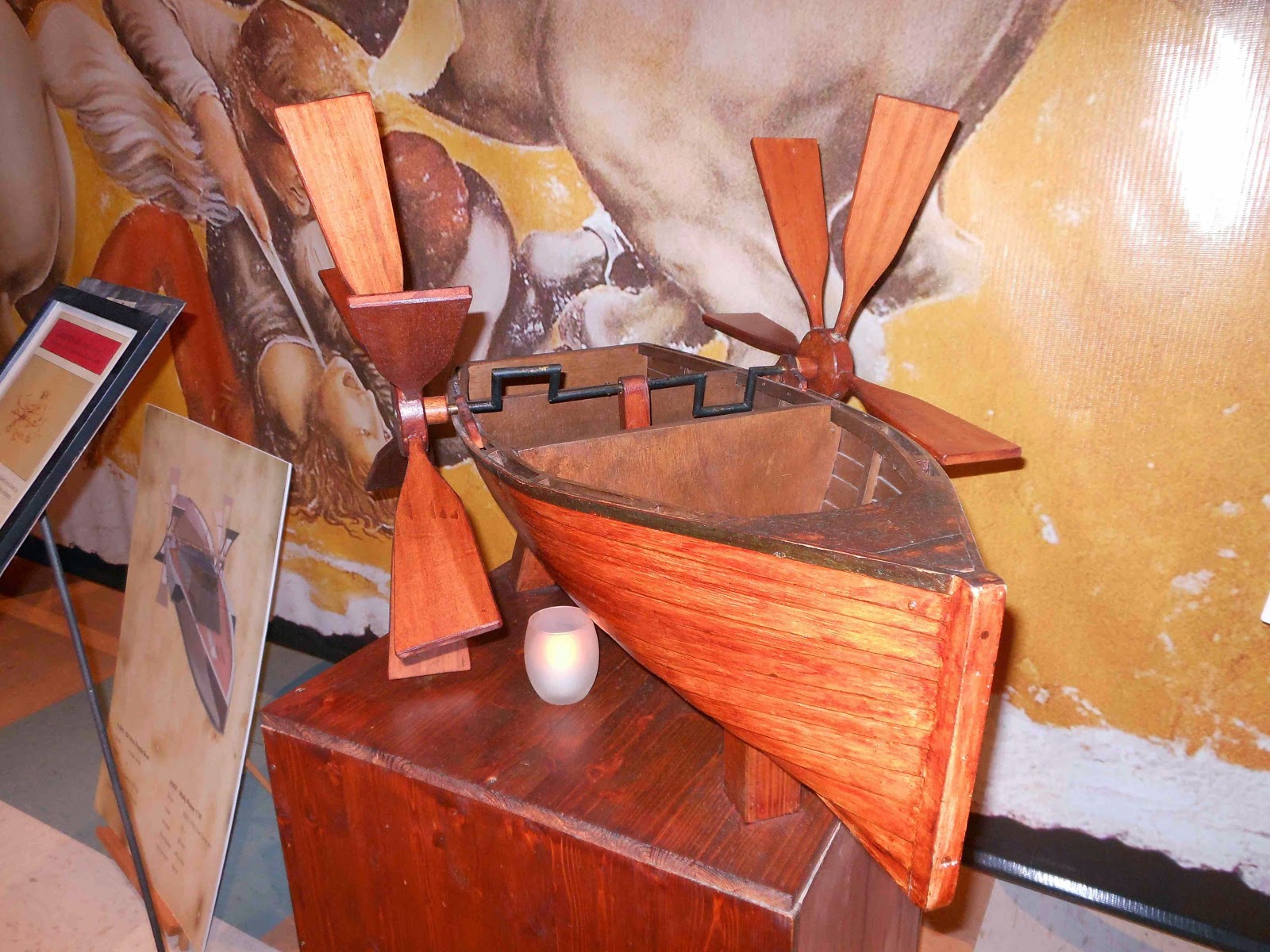 Leonardo lived during the back half of the 15th century to the beginning of the 16th century. This was nearing the start of the Renaissance period and there certainly was technology available. Metals were worked and rolled, optics ground and gears, pulleys, and other simple machines were part of daily life. Gutenberg had invented the printing press more than a decade before da Vinci's birth and books were becoming available.

What I had hoped was the little model boat's construction would have more reflected the times of Leonardo. It didn't and it was obvious the model builders weren't familiar with boat building, or the available tech of the times.

The hand cranks were made of black painted brazed brass tubing. This was theoretically possible at the time, but a good blacksmith would have made sturdy iron cranks in few hours. The post design that supports the cranks could in no way carry the loads, and the hull planking style isn't really consistent with the period. Most of all Phillip's head screws were visible, and I'm sure Leonardo hadn't invented them yet.

I'm being a bit picky but I have seen better versions of this little vessel online that appear to have the capability of actually working. The good news is that almost no one other than me seemed to notice, and the crowds were enamored with the exhibit.

In Leonardo's times there was no pleasure boating. Boats were powered by wind, or manually and used for work purposes. Leonardo's interest in boats revolved around how to apply them to warfare, doing specific tasks, and their propulsion.

Was da Vinci a boaty guy? I couldn't find any specific evidence after a lot of searching that he was ever on a boat. He does mention them often enough that I have to believe he had spent considerable time on them. He discusses in his notebooks a variety of hull sealing approaches and the materials to be used for this. His notebooks have long discourses about the behavior of water including some thoughts about the hydrodynamics of boat hull design.

He lived during the times when traveling was done on the back of an animal, or bone jarring transport via wooden wheeled wagons. A good day of overland travel in his time would be 15-30 miles at the very best. The alternative was the relative comfort and speed of a boat if you could get there from here.

I do have some empathy for the model builders. When I look at the drawings in his notebooks they seem to come in two genres. Most are concept sketches that vary from almost doodles to elaborate and detailed engineering drawings.

In this little sketch the upper cranks are attached to a gear that appears to be turning a pinion gear on the paddle wheel axle. It looks like there is a second crank below with linkages to the upper cranks, maybe for feet. It's not a whole lot of information to go on especially if there isn't a lot of related text to go with it. 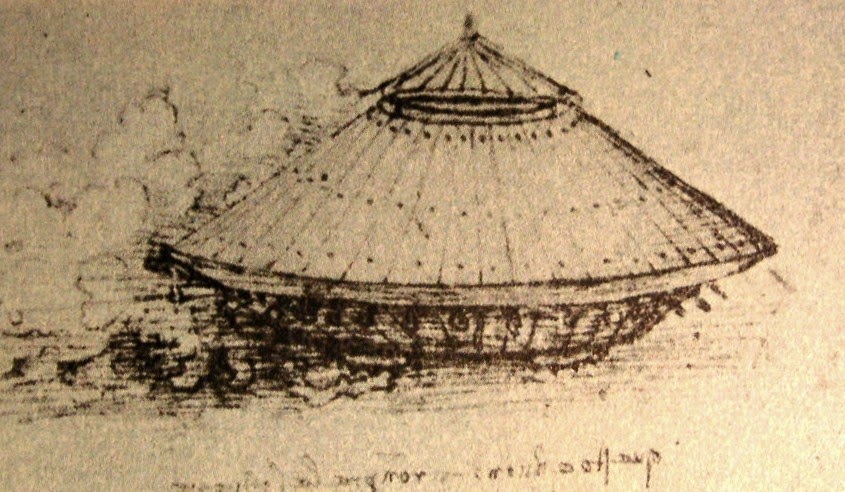 Leonardo worked for a living doing conceptual designs covering a broad swath of technical fields. The drawing forms that I am very familiar with were his proposal drawings, and I'm sure this is one of them.

Proposal drawings showed the client what the concept would look like in action. Even in these times you had to get the client excited about the project's feasibility. Action drawings then, and even today help seal the technical sales deal. Who doesn't love a picture of a 15th century tank precursor smiting the enemy with lots of smoke and cannon balls. In many ways his world wasn't much different from ours. 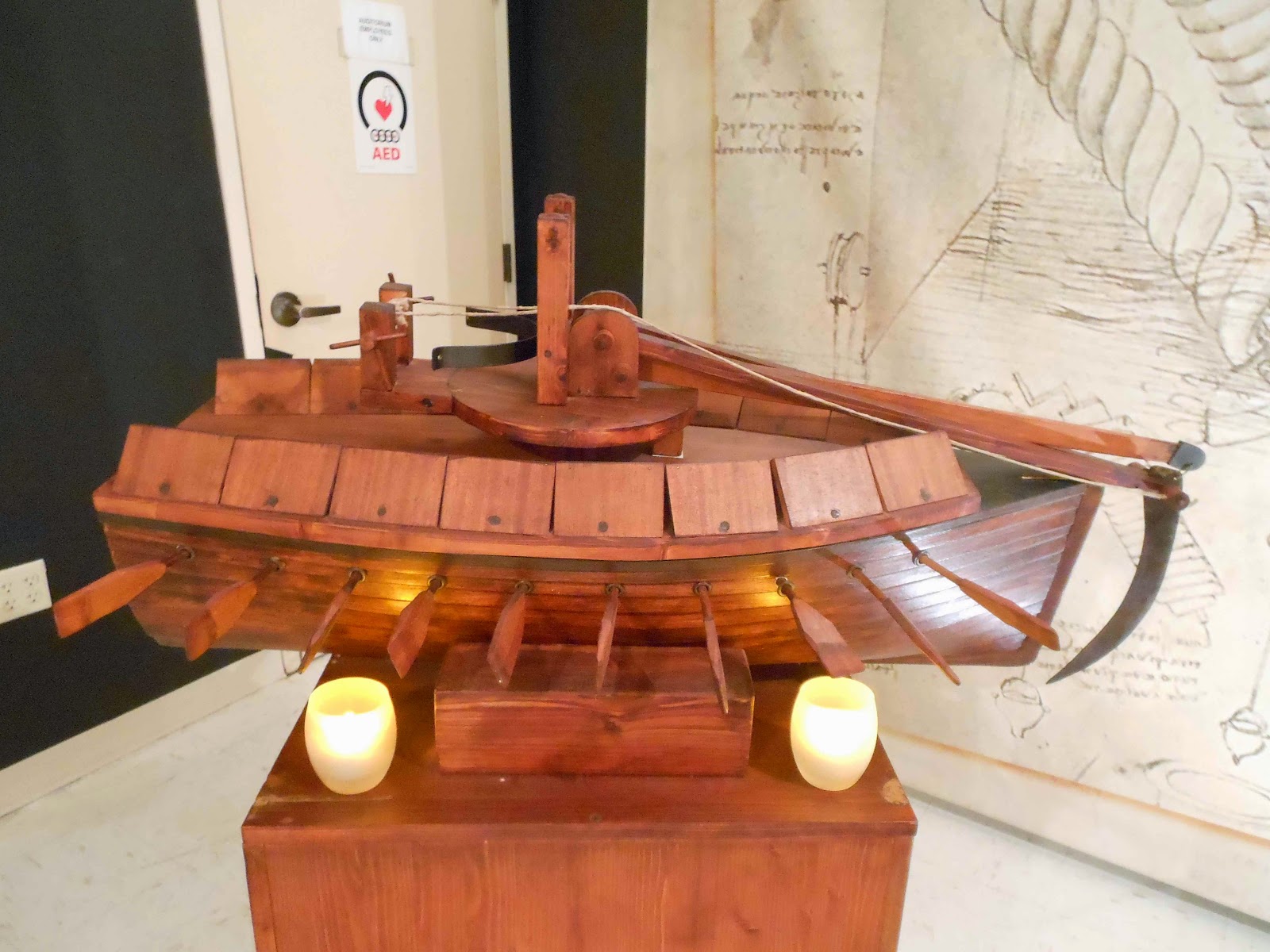 Many of Leonardo's boat design explorations were to create innovative ways to use them in warfare. The sickle boat, boat's with rotating cannons, armored cannons, hidden cannons and many other other variations on this theme were conceptualized.

Leonardo also dealt a great deal with the pragmatic aspects of boating including canal locks and dredging. He was the first to understand sounds travel through water. This is the start of Sonar.


"If you cause your ship to stop, and place the head of a long tube in the water and place the outer extremity to your ear, you will hear ships at a great distance from you." Leonardo da Vinci 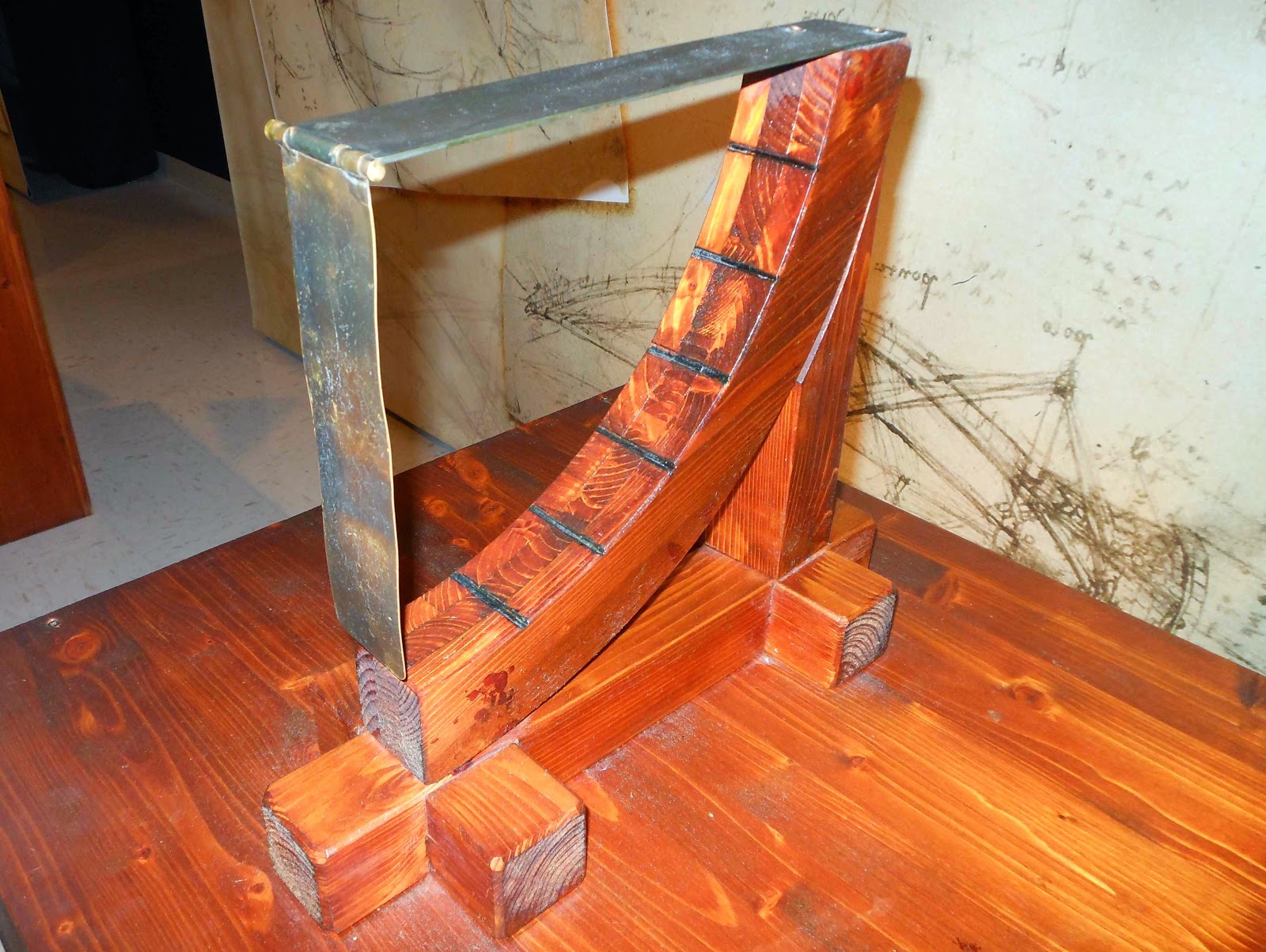 The anemometer is another popularly proclaimed da Vinci invention that most likely isn't, but was well documented, and perhaps improved on by him. This is called a plate style anemometer and more likely credit belong to Leon Alberti. Leonardo actually refers to Alberti's anemometer in his notebooks.

"A device for measuring the force of the wind by reading on the quadrant scale the highest point to which the vane, hinged at the top, is blown.

The air moves like a river and carries the clouds with it, just as running water carries all the things that float upon it." Leonardo da Vinci 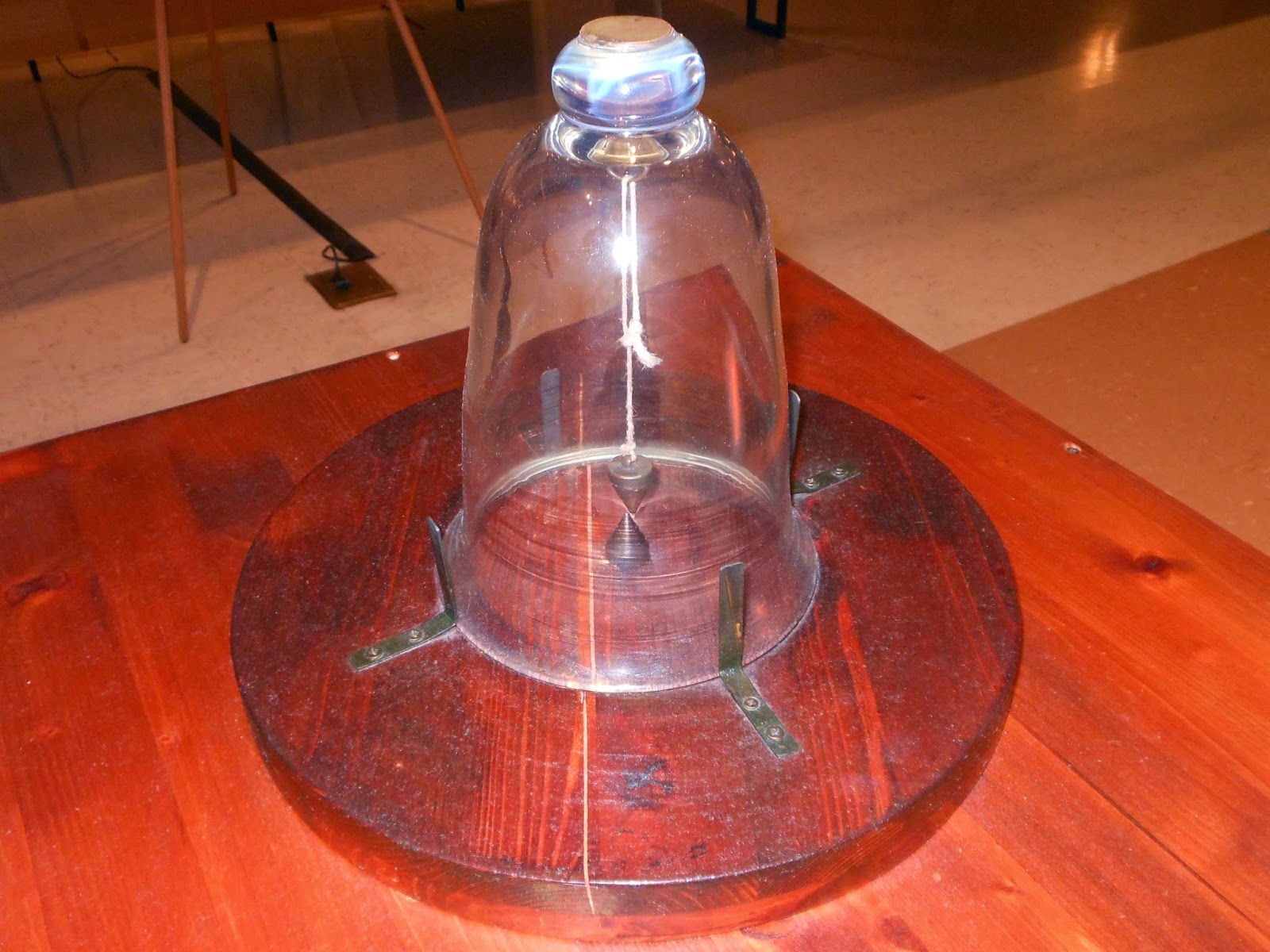 This inclinometer is also an interesting device. Essentially it's a pendulum with a fixed reference point. Leonardo's intent was to use it as a viewable orientation device for a glider pilot with the glass jar protecting it from the wind. I could surmise that a variant of this could be used to show the heel angle of a sailboat. 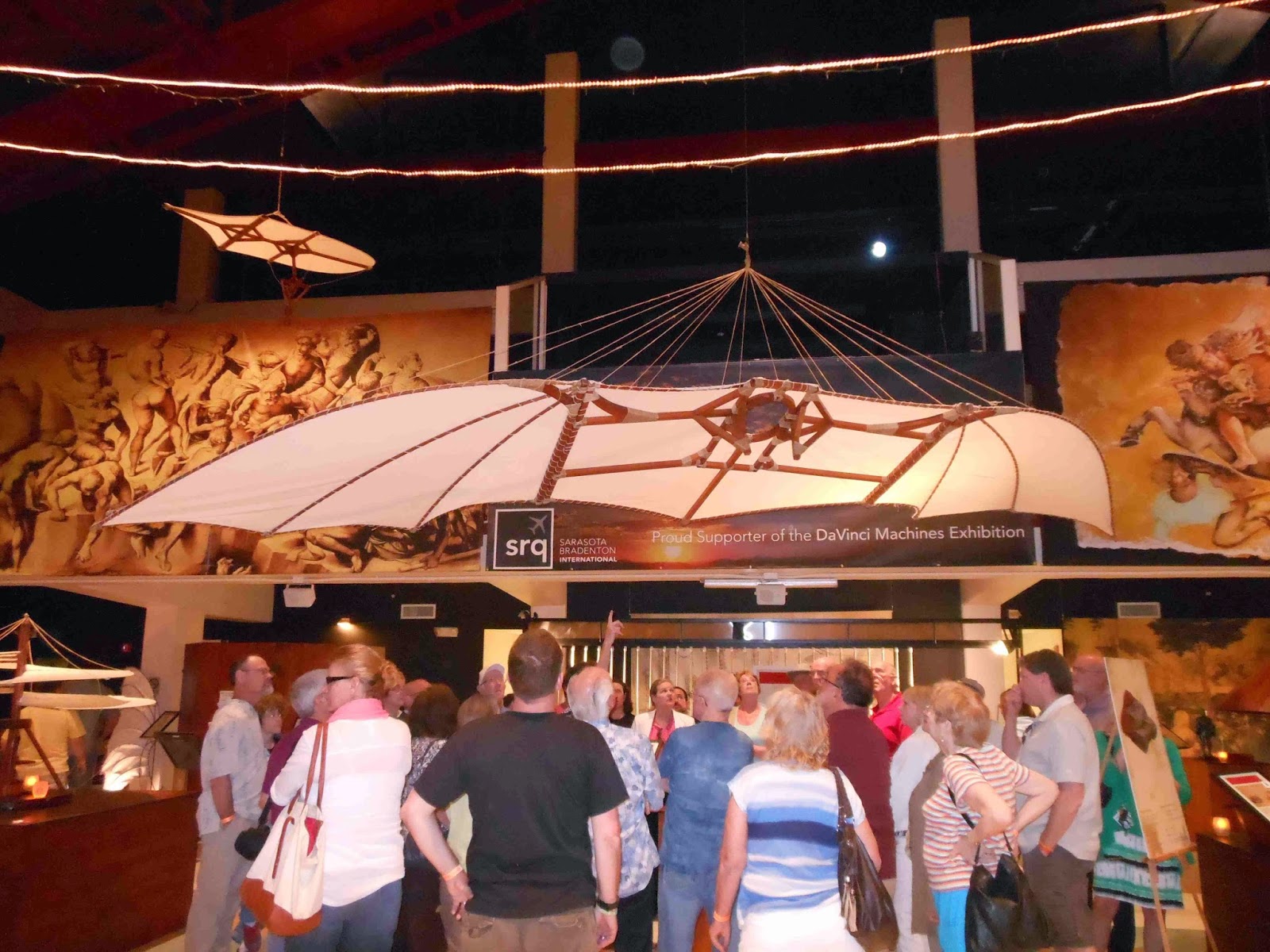 The majority of Leonardo's concepts were never built and his works were never published in his lifetime. In some cases the publishing of portions of his work occurred many centuries later. The end result was da Vinci's efforts had little impact on the science of the time with few exceptions.

One of the striking aspects of his work was his attempts at glider designs derived from studying the flight of birds. 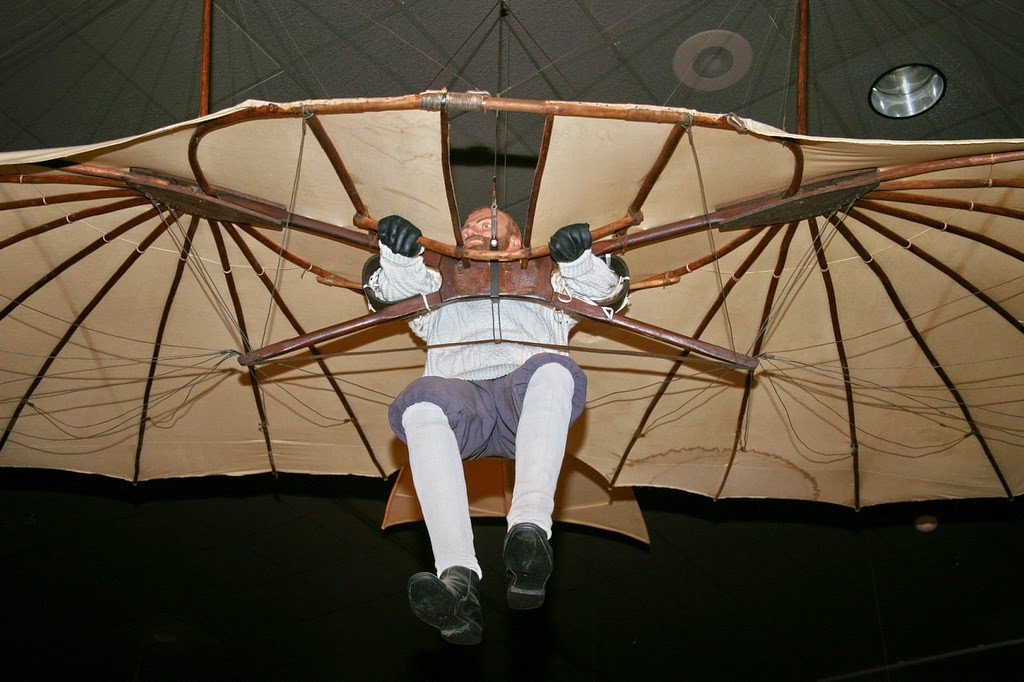 Did Leonardo think of himself as an inventor? I don't know for sure, but I don't think so, at least not in the way that Thomas Edison did.

I think he saw himself as an engineer, scientist and observer. Was he a genius, I suspect so. Did anyone that lived during his time have anywhere near such a solid grasp of the physical world? I can say with some confidence no one was even close. He was the true renaissance man and a quite the boaty guy.

Those who are in love with practice without knowledge are like the sailor who gets into a ship without rudder or compass and who never can be certain whether he is going.
Leonardo di ser Piero da Vinci

The photo of Otto Lilenthal's original 1894 glider hanging in the Smithsonian Museum was taken by Wikipedia user OttawaAC.

All photos from the da Vinci notebooks I considered to be in the public domain regardless of source.