It started when I saw the odd rune looking symbol on a chart. As a matter of fact when I first saw them, this entire island was surrounded by these mysterious runes. An odd sort of curvaceous "E" with a tale hanging off it, with jagged lines adjacent. The pattern I circled was everywhere around the island.

Might they be there to scare boaters away? They certainly would discourage me. A special symbol for old naval mines? Maybe they mark active volcanic vents. Could this be? And why is there an airfield on this tiny little island so near the very end of the Aleutian Islands chain? 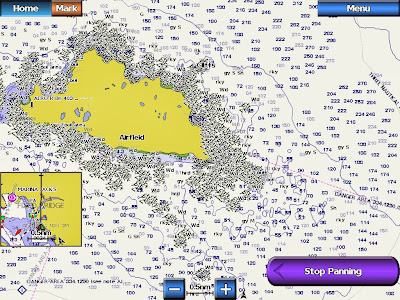 I was curious. So I took a couple of screen shots including one with the lat/long position so I could find the location again. I did, and it's a place called Shemya Island. You can probably actually see Russia with binoculars from here on one of the about ten clear days they get a year. 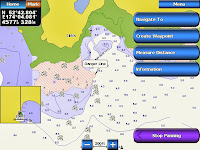 Since I did not recognize the symbol, I down loaded the current version of NOAA's chart #1 to see if I could identify this odd symbol. It doesn't appear on chart #1 at all. Nothing even close, well maybe the symbol for a tree was vaguely reminiscent. 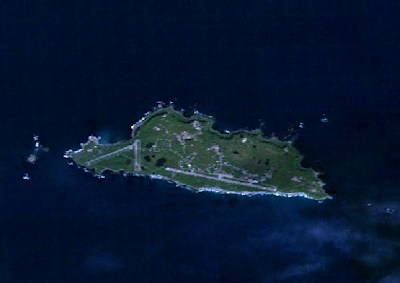 Shemya Island is part of the Near Island group at the most western extremes of the Aleutian Island chain. The name appears at first blush to be oxymoronic but it was named by Russian explorers.

The military presence on the island started in 1943 near the end of the Aleutian Campaign. This event is a not well known military adventure in which the Japanese attempted to gain control of a portion of the Aleutian Islands. It included two attacks on US forces located at Dutch Harbor now of current "Deadliest Catch" notoriety, and the occupation of the islands Attu and Kiska. Although the Japanese were quickly driven out by combined US and Canadian forces, all of the participants suffered almost as badly from the extreme weather conditions, as the actual warfare itself.

Today it's just referred to as the Rock by those who have served there. I suspect it was one of those places you would get sent to if you were caught "in flagrante delecto" with the General's wife. It's truly in the middle of nowhere. During the Cold War it was an important radar and listening post, but it now functions as a remote refueling base for military aircraft. 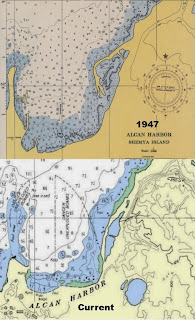 I have read a lot about Shemya Island, and the others in the area trying to find the source of this symbol, and over time I have come to the conclusion this rune most likely indicates weeds, ie kelp.

I also suspect in this case the data was overlayed from a third party source, and may be very out dated. The reason I say this is Shemya Island has no sea otters.

Why is the lack of these marine animals having an impact on the amount of kelp in the area? The reason is sea urchins are a big part of their diet, and sea urchins dine on kelp. No sea otters, much less kelp. Comparing the NOAA chart from 1947, to the current version there are fewer weed symbols today.

An inquiry to the cartographers went unanswered, and I did an exhaustive search for the strange symbol across every form of mapping symbol database I could find. GIS, to aviation, and everything in between to no avail. I even looked back as far as 1931 to see if it was an obsolete symbol. The NOAA chart symbol for weed/kelp was essentially the same.

I did make another observation. The usage of the symbol is the heaviest at the western end of the Aleutian chain but by the time you get to the Alaskan coastline the more traditional symbol reappears. So what's left is for me to make some alternative guesses. The Aleutian island chain was formed by plate uplifting, and volcanoes. I think these islands abound with diamonds, and gold, and the gummit is trying to scare boaters away with these strange runes. It's either that, or they are marking known Siren, or Kraken nests.

In either case I don't think the average boater will oft be exploring this part of the world. I don't think you would be welcomed at the dock on Shemya Island, and if you visit any of the other nearby islands, don't forget to bring your rain gear, and a warm jacket. It can get a wee bit inclement, and if it's not raining it's foggy. Any one else actually have a clue, because I don't.
Posted by Bill Bishop - Parmain at 1:03 PM