This scenario eerily  reminds me of another. A owner had purchased a new boat, and had a long laundry list of things that he could not live without. A kick butt stereo, loads of electronics, and inexplicably, although this boat was just short of forty feet, there was no anchor winch and he wanted one. I go forward and stare at the bow. There is no anchor pulpit, and to install one the bow light and a cleat will have to be removed. Okay that can be done.  The story got worse when I actually looked inside the anchor locker and discovered it was barely large enough to hold a hundred feet of rode.

I called the manufacturer, and asked why the locker anchor was so small, there was no anchor pulpit, and it will take some heroics to install an anchor winch. There's a pause, and then the response. "Where we live if you go off shore in twenty minutes you're in a thousand feet of water, and you can't anchor anyway. Most of the people here use a anchor lifting ball to pull up the anchor."

"Okay" I said. "But where this boat lives you have to go an hour in a really fast boat to get into a hundred feet of water. Are you telling me that after spending nearly $300,000 on a boat almost forty feet long that you expect the owner to attach the ball, haul up the anchor, drag a couple hundred feet of wet rode, chain, anchor, and a two foot ball into the boat, sort it all out and stow it in a locker half the size of a real one single handed? Your kidding me right?" After a very long pause the customer support guy said, "Well he bought the boat didn't he?" I adjusted the boat to the way it should have been built, but not without some tribulations and real expense. 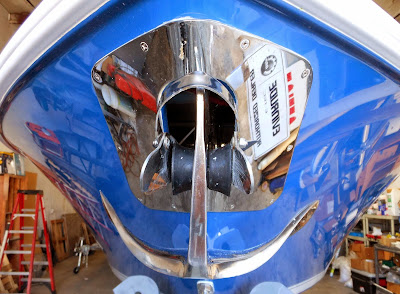 That was several years ago, and here is another small adventure. It's not that things aren't right that bothers me. It's the knee jerk response you sometimes get from people trying to rationalize why their boat doesn't meet minimal expectations that's so exasperating.

So here is today's example. It's a gorgeous looking anchor installation. A gleaming surround holding a polished stainless steel anchor. A winch is hidden below deck, and there is a fairly commodious anchor locker. That's the good news. The bad news is when you push the anchor down switch, nothing happens. That's not quite true, the winch turns, and chain pushes out, but the anchor goes nowhere, at least not in a timely way.

I met the boat while installing some electronics. It was new, and had been used once by the owner. The bow of the boat looked like it had been drunkenly beaten with a medieval mace. Although I wasn't there this is the story as related to me. The anchor winch was tried, and it didn't seem to work. The boat moves on for a bit, and all of a sudden there is this awful clattering, and horrific banging coming from the bow. The anchor had fallen out of the pulpit, and was beating itself against the hull. The result was a bad case of gelcoat acne. 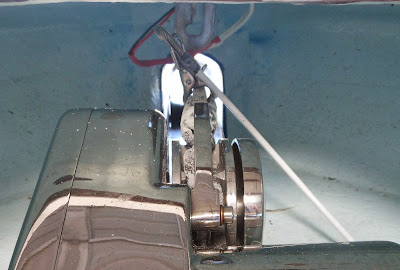 The solution from the builder for deploying the anchor was the owner has to use the winch to let some chain out, go forward and open the anchor locker, reach way in and push the anchor out enough so it will fall out, and go back and use the winch to lower it. Well that works alright, but why not build it so it works right it the first place?

The dealer changed the pulpit to a better one, added a safety lanyard which should have been there in the first place, and moved the pulpit forward so the anchor's swivel shackle doesn't bang into the winch gypsy. Now it deploys, which is what it should have done in the first place. All in all it wasn't complicated. No rocket scientists in white lab coats got involved. In addition reaching way in to push out the anchor in free fall mode could provide the perfect opportunity to lose a finger thus causing you to change your name to "Niney."


So instead of making excuses for poor design, and implementation, just man up and be honest about the problems. You're a boat builder. We're all used to your lack of perfection. Niney may not sue you if you're repentant, or at least pretend to be.