Looking around the N. E. Taylor boatyard, my eyes passed over a small sloop, and then immediately snapped back. That's a Carl Alberg design for sure, and you don't see many on Florida's west coast. It must be an Alberg 30, but somethings not quite right.

In the 80's I lived in the Toronto area, and Kate and I were boat shopping. The list was broad at first and then got narrower as we winnowed down the list. One of the early options was the Alberg 30 built by the Whitby Boat Works. I loved the classic lines, but the cockpit seemed at the time to be more exposed then I liked. Georgian Bay's waters are at best cold, and at its worst freezing. It was also a little smaller than than I wanted.

The search shifted to the Alberg 37's, but I just couldn't find the right one. Next on the list were the C&C 34's, and we crawled through a lot of them, but in the end we got a great deal on a Mirage 35 and had it delivered to Midland Ontario. This boat however is a Alberg designed Pearson built Triton....I think, because there is a bit of a mystery about it.

The rumor in the yard was this little boat was important, and it may well be because the restoration efforts I saw are nearly museum quality.

I never met the owner, and all I know about this little vessel is what I could see. I climbed the ladder and took some pictures, and never boarded her, but as you can see from the pictures the vessel where finished is in like new or better condition. There were three grey nonskid areas that had been prepped to be resprayed. The two in the cockpit I was told was due to a faulty power cord incident. It is evident perfection is the goal. 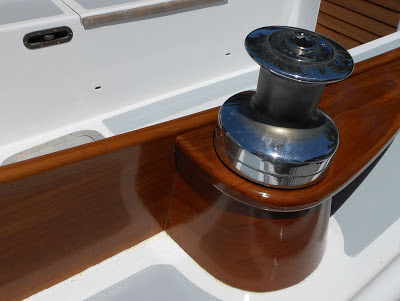 The Triton was Swedish born Carl Alberg's first big design success, and the very first fiberglass production sailboat. Introduced at the 1959 New York Boat show, Pearson Yachts sold about 17 Tritons for around $10,000 each. 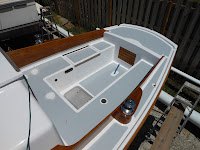 There are three primary versions of the Triton each built by a different manufacturer. Pearson built the majority, and they are visually distinguished by the wooden cockpit combings. Aeromarine Plastics in California built around 200 Tritons, and their version had fiberglass cockpit combings.

An unknown number of Tritons were built by Jouet in France. They appear to have built two versions. A few that look very similar to the original Alberg design but with only one port on each side of the forward cabin, and a substantially modified, and more modern looking version that used the same hull. 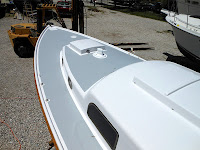 All very early fiberglass boats share the common characteristic of all being built like brick outhouses along with having hefty displacements. The Triton was no exception weighing in at about 8,400 lbs to 9000 lbs fully loaded.

Alberg was born in Sweden where people love skinny keelboats with long overhangs, such as the Folkboat. It is easy to trace the Triton's lineage to such designs. The cockpit's long enough to lie down in, yet even when pooped, won't hold enough water to threaten the boat. The bridge deck, which adds a measure of safety for offshore work certainly helps. The Triton's surprisingly quick for her short waterline which, when the boat is heeled, lengthens nicely. Consequently, the Triton is a very forgiving boat, especially for the beginner." Daniel summed up the Triton more elegantly than I ever could have.

Carl Alberg was never inclined to modify his elegant designs and conservative sensibilities despite constant pressure to do so. Beamier boats with harder turns of the bilge, and finned keels were becoming more prevalent, and Carl ever so slowly complied. As you see below with similar sized Alberg designs the beam did slowly increase, but at a glacial pace. Over a twenty year period Alberg designed vessels in this length class only increased an inch and a half in beam. I suspect he would have just smiled if asked about this. Likewise the long keel stayed in his design portfolio.

But here is my mystery. Octagonal flanged ports are on this boat. I have gandered at a zillion grainy 1960's esque lo-rez scanned photos, and photos of every Triton for sale I could find. So why can't I find these on another boat? The patina looks perfect, and they have every appearance of being original. 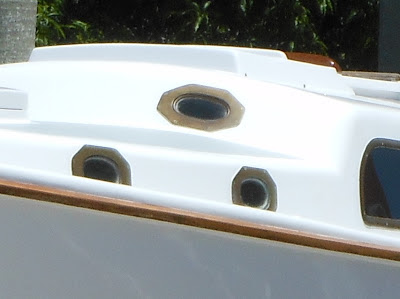 The classic Alberg lines I was so attracted to well over twenty years ago still catches my eye today. The approximately 700 Tritons built were the beginning of a long series of Carl Alberg designed sailboats that included the Alberg 30, Alberg 35, Alberg 37, and thirteen of the Cape Dory designs to name a few.

Over 10,000 boats from his 56 designs have been built over the past 50 years, and most are still in use. If anyone thinks this little boat is notable, let me know and I will chase down the owner and get more info. It's a beauty, at least I think so.

I'm leaving this with a photo of an Alberg 30, and successor design to the Triton. It was taken by Wikipedia user Ibt Battuta. 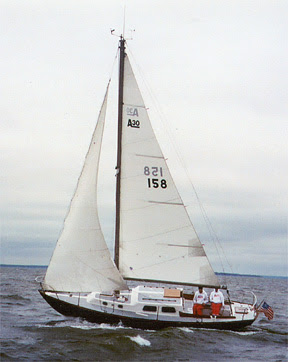