It's not uncommon prior to the annual Suncoast Super Boat Grand Prix offshore boat races that I get some chores to do, and this year was no exception. I can't give you any details about the boat, But I can show you the tasks. Speed is important, and the boat in this particular class has a "not to exceed speed." You exceed the magic MPH, and you automatically go to the end of the line. This Livorsi GPS speedometer is GPS driven, and the battery inside the GPS has died, hence it is now non compos mentis. There are three options available. Remove the GPS, send it out, and have a new battery installed. Buy the new GPS engine that no longer needs a battery. Or do the not well advertised interfacing the NMEA output from a chart plotter to the instrument. 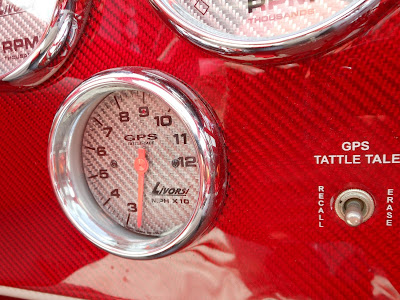 There is no manual to do this, but with a little shrewd observation of the back of the instrument it wasn't rocket science to figure out what was going on.

Three, count them three wires are involved. We have a red and black wire which are used for power, and what's left is the orange data wire. We will use a Garmin 545 chart plotter that is sitting in the dash for the NMEA GPS output.

Step one is to emasculate  the existing GPS wire by cutting it back far enough to leave about a foot of pigtail. The red wire is secured, it's not going to be used. The black wire is attached to the Garmin's ground, and the orange wire is attached to the single ended NMEA output wire. In this case if my memory is right it's the blue wire. Go to the communications set up menu, and make sure the port is set to standard NMEA output. This job is now done. 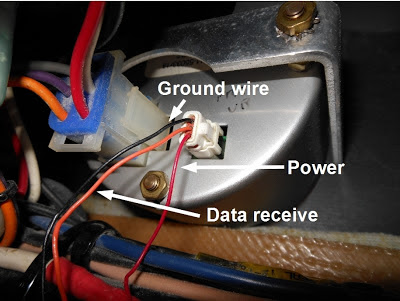 Part two of the task is the Garmin 545's GPS antenna is acting up, and a new one was bought. Hey, how long can it take to change it? The answer is not long if you can get the old one out of the boat. As you can see, removing it took only some very simple tools everybody has. A hammer, utility knife, a screwdriver you can mercilessly beat on with the hammer, and a pair of wire nippers. it's important on these boats that things are mounted securely, because the boat is going to be seriously thrashed during the race.

In this case the original installer accomplished this on a grand scale. A large hole was cut, and carefully beveled back so the GPS would sit flush on the surface. Then a wooden doughnut was cut and fitted onto the bottom of the mount, followed by prodigious application of 3M 5200. Just for additional measure copious quantities of some sort of silicone was applied underneath. It wan't going anywhere without substantial persuasion.

The methodology applied was to use the screwdriver to beat a slot into the GPS large enough the get the hammer claw jammed in. Do the Archimedes, "give me a long enough lever thing," and a corner lifted up enough to jam a screwdriver underneath the base. Force the claw under the base, and repeat. With the sounds of rubber like stuff shearing and snapping it finally popped out taking some balsa core with it. 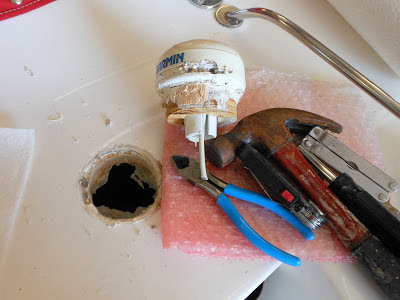 A little judicious hacking, slicing, and scraping gets the majority of the goo removed, and now for the new GPS.

The Garmin GPS's come with three mounting options. The top one is what I call the ice cream cone, and is used with a threaded mount. The round one in the middle is a surface mount, and the bottom one is for mounting under a console or the like. I'm going to use the one in the middle.

It's large enough to cover the hole, but the three mounting screws will drop into empty space right on the very edges  of the hole. Solution? A piece of 5" x 5" starboard is pre-drilled for # 10 screws that are 2.5" long. The starboard is held in place from below, and the screws are put in from above pinning it in place. Some 3M 4200 applied around the edges will keep it from going on a walkabout, and will stop any water intrusion. A little more goo will keep the starboard from shifting underneath, although everything is pretty solid already. A ton of tie wraps, and the second job is done.

One more final task. The Garmin 545 badly needs a software upgrade. It thinks it's 1993, for starters, and the GPS position acquisition is cranky. There was early on a fix for this in the software, and it gets a big upgrade. Turn it on, and it acquires a fix ASAP, and I'm done. I'll see the boat again Sunday morning on race day to check everything, and do some poking around. I love having legitimate press credentials. It gives me the aura of respectability, without actually having to achieving it.