The lovely, and most aptly named West Marine associate Marina agreed to pose in front of her hand crafted Hurricane preparedness poster. I thought her Vanna White pose was the best of the photos I took. I liked two additional aspects of her art work. The wind flayed captain's boxer shorts are detailed with West Marine logos, and his expression reminds me of Nick Park's Wallace and Gromit claymation characters. Many thanks Marina. 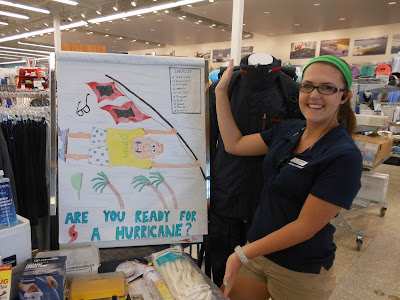 Rather than have me droning on in my most pedantic fashion about what to do with your vessel when the big one gets into the hood, I'm going to instead let others do it for me. These are among the best sources I can find, and trust. 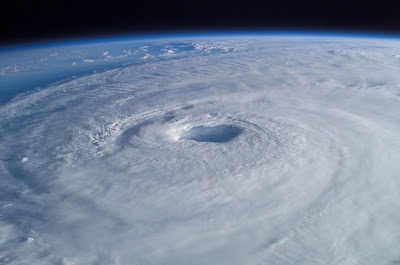 The weather, always keep an eye on it. Mother nature is not your friend.

The NHC is my first go to site, it's very user friendly, and easy to navigate. I take a quick look at the graphics, and then go to the discussion section to read what the meteorologists are thinking about what will happen.

The Crown Weather Atlantic Tropical Weather page provides a massive amount of weather information covering from northern Maine to the Gulf of Mexico, and the Caribbean Sea. Included are links to radar sites such as Bermuda, Cuba, Puerto Rico, and many others. Wind, and surface analysis, satellite imagery, and much more. This is my one stop shop for weather.

The GFS, GFDL, HWRF, NAVGEM, and CMC model runs with animation. It appeals to the geek in me.

Spaghetti model runs when there are hurricanes, and a full portfolio of weather related info and graphics.

Hurricane preparation, the devil is coming!


I have included a number of articles related to preparing your boat for a hurricane. I also have included the little video I took during tropical storm Debby. If your boat has to stay in the water during inclement conditions, floating docks in general are a much better option than fixed docks, but floating docks can also present some challenges. In the video you see a sunk Meridian 341 in the foreground, but the sail boat in the background is what the scene is about. I've written about this before, but I want to emphasize it again.

Concrete floating docks are very heavy. This translates to a lot of mass. As a consequence they react to wave motion at a slower rate then the more buoyant sailboat. You can clearly see that the docks motion does not match the boats motion. What periodically happens is the heavy dock outboard end is going down, while at the same time the sailboat's bow is heaving upward creating considerable strain on the lines. I suspect this effect was the cause of the Meridian's sinking. Boat goes up, dock goes down, and in the case of the Meridian the resulting strain ripped the cleat clean off the dock. This allowed it to rotate sideways in the slip, where it became holed by thrashing against that small finger pier. In this case both boats may well have been better served by attaching additional lines to the fixed concrete post as a back up. I'm just thinking out loud and a bit outside of the box.

These links all tell the preparedness story in a comprehensive way. I particularly liked the Manatee Sail & Power Squadron's piece that was both pragmatic, and included a sobering time line about when to start preparations. David Pascoe's article discusses many items overlooked by others.

Hurricane preparedness for your boat presented by the Manatee Sail & Power Squadron.

"The best and worst of hurricane prep" by Bob Adriance. Lessons learned by Boat US.

A guide to preparing marinas, yacht clubs, and boats for hurricanes from Boat US. 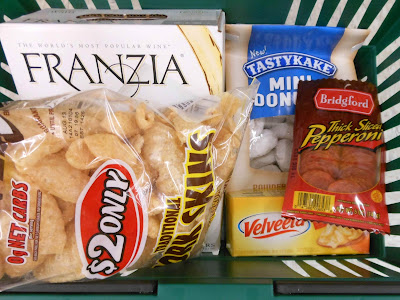 The peak of hurricane season is from mid-august to late October. Amidst the efforts to protect your boat, don't forget about yourself. Make sure you have plenty of liquids stowed away in your hold at home, and lots of nutritious nonperishable food items. Stock pile early, all of the new longer shelf life Twinkies are already sold out here.
Posted by Bill Bishop - Parmain at 1:08 PM