It was a good service call, and it's all over in about 30 minutes. It was a 2007 KVH M4 dome that stopped acquiring the DirecTV satellites. I could hear it whirring around looking, unwrapping its cables, seeking again, but no TV signal joy was to be had. The DirecTV receiver also verified the story. The endless searching for satellites message. Testing the transponders showed zero signal.  Not even a whiff of RF was detected. But I was ready. 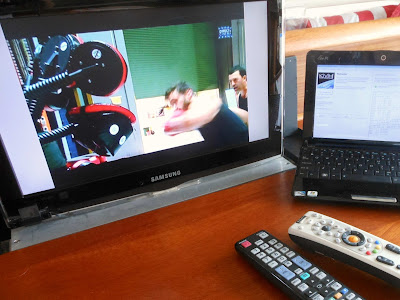 I had KVH's software on my netbook, and everything on this boat is super convenient. The KVH data port is right next to both the TV and the receiver. This is the Christmas miracle of marine electronics work. An air conditioned cabin cool enough to hang a side of Angus beef in, everything is within a couple of feet of me, and I don't smell or look like a sweat soaked old guy.

I jack into the data port. In seconds the KVH Wizard is running. I do a ZAP, and the KVH's program runs anew. RF and, limit switch passes, every thing seems fine, except a small faux pas. What's with the wonky GPS position?

It's time for me to make a small disclosure. I have installed a lot of KVH systems through the years, G4's a lot of C3's, a big number of M3's, and a pile of M1's. But in truth they rarely every break, and over the past three years I have only had to repair two units. One was a painful warranty repair on a M1 which was easy to diagnose. What made it a P in the A was the third party warranty company. That was back in January. It was about two years before that when I replaced a bad RF board on a G4. So it takes me a few minutes to get back up to speed.

I have had many service calls because the satellite system ostensibly isn't working, but it was never the KVH system's problem. It's always something like the TV is on the wrong input, the subscription to DirecTV has expired, or the ilk. Entertainment systems can often be very complex  to use. KVH's gear is like Airmar's transducers, they rarely ever break.

I can see we aren't tracking, but I'm not sure why, so I call KVH's tech support department, and ask for some help, and get it quickly. I have no docs on the boat for the system, and the tech feeds me the sentence to set the system Lat/Long. I ZAP, and we're still not acquiring the satellites. I'm asked to do a memory clear, and do another ZAP. In just a few seconds, bang, it finds the satellites, and its tracking problem is solved. Some portion of the memory must have gotten corrupted somehow, maybe by a power jolt. Job done, and thirty minutes have elapsed.

There is a however a remarkable aspect to this story, and it really isn't about the geek aspect of the repair.

This all happened on a Saturday morning, and KVH staff were there to help me. Being a shrewd observer of human behavior, I have noticed that boats are most likely to be used on weekends, that's when owners find out that stuff isn't working. I get a call, and respond weekend or otherwise. 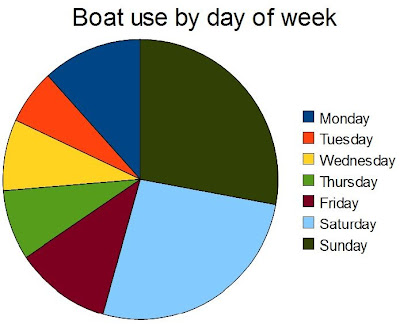 Over half of all recreational boating occurs on the weekend. Some of the very few marine electronics companies I have found that provide live human 24/7 dealer support are KVH, Jeppeson/Nobeltec, Intellian, and Seatel. There may be a small number more, I just haven't found them all yet.

So I've just been wondering. Why is it that more marine electronics companies don't provide live dealer support during the peak times when their customers are actually most likely to be using their products?
Posted by Bill Bishop - Parmain at 9:44 PM