It's a bit of a misnomer to call these vessels boats, yes they float and travel on the water, but beyond that they bare little resemblance to what most of us use in our daily life. To me they conjure terms like space shuttle, fighter jet, Formula 1 race car, and the ilk.

Crew help the drivers, and throttle men squeeze through a small water tight hatch on top and into formed seats. Hans devices are passed down and installed. Next come helmets loaded with comm gear. Restraints are fastened. Looking down the dock, I see a portable air conditioning system being disconnected from a craft being cleared for departure. See, it already sounds like a description of a fighter aircraft being prepared for a mission. The only thing that seems to be missing are the heads up displays, and the air to air missiles. 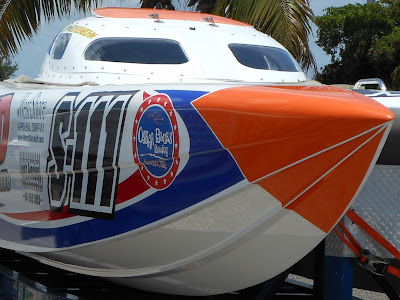 I used to watch the races when the course extended down to Siesta Key. It was easy to get to the two miles of open beach. You weren't so jammed that you felt like you're mired in the center of a coconut oil laden sardine can.

For reasons that were never quite clear to me, the race course was moved just a scosh north so it can only be seen from Lido Key. Small public beach, and lots of hotels that charge a sultan's ransom for rooms and access to watch the race. 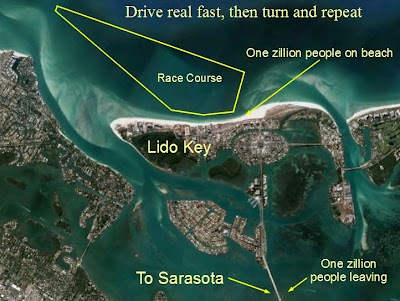 It now requires getting up at the crack of dark, driving out to the beach, and staking a claim to your 10 square feet. Then leaving someone there to guard your things while you venture off on a hopeless quest to find a parking space, and trudge back. When the race is over thousands all try to exit the small key at the same time on a single road at speeds that make a glacier look fast. If you haven't guessed by this point, the pain threshold is too high for me these days, so I don't watch the races anymore. I do however get to spend time in the wet pits at the races. 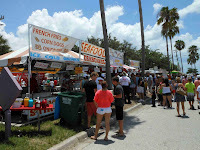 The build up to the races have been going on all week. A Main street parade with race boats loaded with bikini clad young ladies waving at the crowds. Charity events that include meet the drivers parties, and golf tournaments.

The performing arts hall parking lot adjacent to the wet pits has a carny atmosphere about it. Thousands of sweat soaked hoards mill around clutching deep fried nourishment, and canned libations whilst gawking at the boats and their huge fleet of support vehicles.

The wet pits however have a serious and intent driven feel. Almost all boats require being launched with a crane into a small cramped area. Support staff swarm around the crafts and pull them to to a dock space. Supplies start moving down the docks. Engines are fired up, and tuning and checks get underway. The noise has started, in a high decibel way painfully reverberating off the concrete seawalls.

It's the technology I'm interested in. Drive systems, hull shapes, props, nav gear, communications and camera systems. I'm careful to stay out out the way. No asking whuffo this, whuffo that. So no real conversations with the crews occur while they are working.

The stand out for me is Miss Merry Mac, one of the two turbine powered boats at the race is powered by twin 1800 hp marinized Lycoming t-53 turbines supplied by Turbine Marine. These are surplus military helicopter engines that are torn down and completely rebuilt. Corrosion susceptible components are replaced with more durable materials, and water cooled exhaust systems are fabricated.

The end result is a very powerful, and lightweight package with fewer moving parts and a much longer life cycle between major overhauls. They are not cheap however. Expect to pay on the order of about $150,000 for a turbine engine. You can buy gas powered race engines with this nearly this level of horse power, but the costs start to approach the turbine versions. It also appears at a first blush that the long term maintenance costs of the traditional gas engines are much higher. In both cases nobody cares about fuel economy, although the turbines can burn a wide variety of lower cost fuels including kerosene. 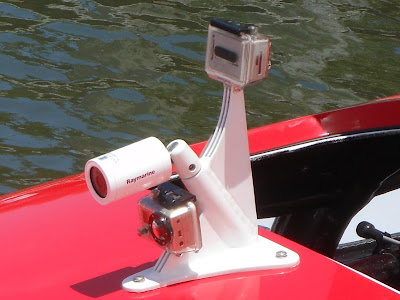 Cameras are everywhere. A lot of these boats have no backward visibility, and no one wants the drag involved with side mirrors. In the case of Miss Merry Mac there is a Raymarine aft facing camera connected to a E-series chart plotter. It is accompanied by two Gopro Silver video cameras.

Gopro cameras are clearly the dominate preference for race boats teams. They don't typically provide live views, but they do have the capability to provide HD resolution videos of the race. There are live streaming systems adaptable to the Gopro cameras, but they are not waterproof. In the photo are two Gopro Silver cameras. They are wirelessly managed by either remote controls, or smart phone apps. I've played with one, they are very cool miniature video recorders.

Often what we take as new tech is often old technology with a shiny new set of clothes. The surface piercing drive system seen on many race boats is no exception. The patent drawing circa 1924 is from an inventor named Albert Hickman more famously known for his Hickman Sea Sled, and his design collaboration with the Fisher-Pierce company resulting in the first Boston Whalers. 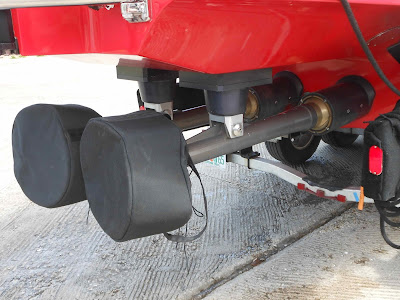 Surface piercing drives are efficient and are very wicked looking. To me they resemble large power buzz saws with all of the safety guards removed. In the case of the Lucas Oil boat pictured, these BPM drives have trim capability via a ram mounted to the center of the shaft. Actual steering is done with a conventional aft mounted hydraulic rudder. The prop covers are there to protect them because they're pricey, and not necessarily to keep them secret.

Surface piercing propellers are ideally half submerged in the water. Unlike its fully submerged relatives most of us are familiar with, the surface piercing propeller is designed to carry a air pocket into the water on the low pressure side blade face. This reduces the friction, increases efficiency, and more importantly virtually eliminates damage from cavitation. When a conventional propeller cavitates, a low pressure vacuum is formed on the propeller surface. When the vacuum vanishes the water slams back into the space. To say it another way, the water can hammer the surface hard enough to spall the metal. Oh yeah, because half the prop is always spinning out of the water you also get a heck of a rooster tail much to spectators delight. 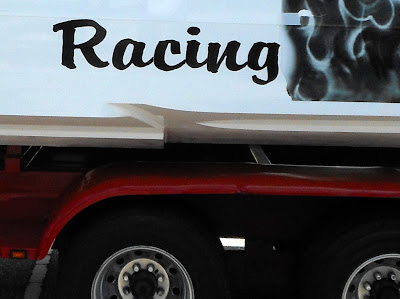 "There are no new steps." Barry Fife, from the movie Strictly Ballroom. This is another technology that has been around from almost the beginning of gas engine powered boating. The first appearance of hull steps is on a race boat in 1910.

In the end and simply stated it's a design that shrinks the amount of wetted planning hull reducing friction, and increasing speed. This hull design does come with a handling price. The Super Boat rules require all steps to be ventilated, which is why you see the slots extend outboard to the hull edges. Severe things can happen when ventilation slots get blocked which can include include quick slowdowns, and abrupt hard turns. My personal opinion is this hull form is best left to professional drivers. Step hulls are apparently now de rigueur. Every single hull I looked at was some form of a ventilated step hull.

Several times boats made unplanned returns to the wet pits. In the case of the Sun Print 51 boat, it was ingloriously returned under tow by the mooring field pump out boat after completing only 21 of 60 miles of the race. 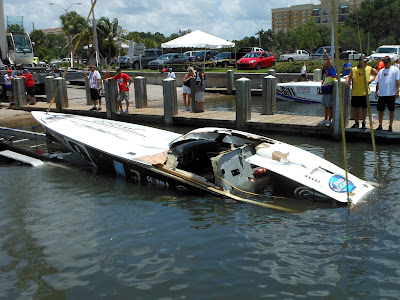 In the case of the Phantom 9 boat, things were not so fortuitous. The boat launched into air off of a wave during the race tilted about 30 degrees to the port, and came back down on the port side hard. Very hard. Things then went from bad to worse in a few more milliseconds with a violent barrel roll. A large piece of the out drive spun off the boat, and a big chunk of the port side canopy was sheared away. Miraculously the boat settled up right. The driver and throttle man were shaken up, but okay. You can see a slow motion video of the accident here.

The Phantom 9 boat team, although not overloaded with funds had invested in good design and safety systems, and it paid off. The seats were Momo race versions with lateral head movement restraints, and the windscreens were extra heavy duty. But never the less, the structural damage was substantial with the aft cockpit bulkhead broken loose, and a good third of the canopy missing. It demonstrates that the sport does come with real risk. 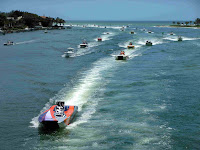 The brilliantly conceived, but poorly thought out plan was to leave the pits a bit after the race start, and drive out to the New Pass bridge. From the drawbridge, I could watch all of the race boats returning, and I could then pretend I had taken them from the private helicopter I had chartered. I hopped in the truck, went to my favorite pie place, and ordered a slice of Pepperoni and jalapeno. It was chased with a cold Corona strictly for medicinal hydration purposes, and off I go.

So far, so good. There was light traffic on my way out to the bridge, and about 15 minutes later the boats started to stream in. 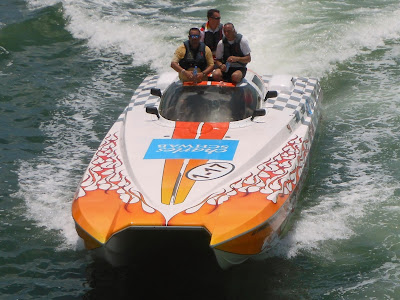 There are two things about this photo. I know one of them. The boat is being steered by feet. The thing I don't know is where did the third guy come from? Is he an illegal immigrant sneaking in, was he beamed down from the Enterprise or is he a stowaway?

So what went awry with my plan? I didn't count on the zillions who all on cue promptly packed up when the race ended. They all then tried at once to leave, and that included me. There is the St. Armands traffic circle, the terror of older residents and hapless tourists you have to pass through. South bound one lane only, that's me. East bound from the beaches, one lane only, that's the zillion. I found Garrison Keillor's PHC on the radio, and settled down for what would be over an hour of creeping to go about two miles. Maybe I should have chartered that helicopter after all.
Posted by Bill Bishop - Parmain at 8:00 AM