I have no comm port so I must scream

Six weeks ago I embarked on what should have been a fairly mundane task of getting NMEA data from a GPS and some older Simrad gear imported into a laptop running Nobletec's Odyssey Time Zero navigation software. This wasn't my first time at the NMEA data rodeo, and the results were pretty typical. Using the existing Prolific serial to USB converter I could only have one talker, and one listener, not that I didn't try to get a second talker to work. Alas, but not unsurprisingly one talker only for you, and some of the older NMEA version data was getting lost in translation. To help with these issues a Actisense NDC-4 was purchased. The little box arrives, and I install it. It's a pretty straight forward job. The NDC control panel software loads up from the CD, The comm, and USB port drives get installed. I find the comm port (6), and set it for 36,400 baud. Open the control center, and click on port 6, and also 36,400, and it all works as advertised.

I connect the GPS, and data flows to the Nobeltec system. Excellent methinks. I create various configurations to learn how to do them, and whoa, it's almost five. The lure of happy hour tugs at me. Everything gets shut down, and I'll come back in the morning to wrap this install up. That was six long weeks ago, and until yesterday I couldn't get it to work for love or money. 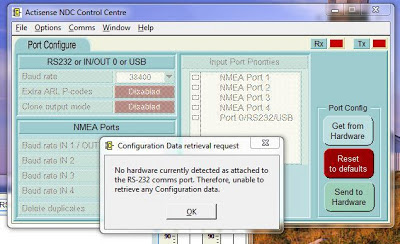 A fresh new day sees me on the boat. I fire up the computer, and add a second talker to the Actisense box. I open the control panel, and it's there, but now insidiously ghosted. Something must have gotten changed. Control Panel/Device Manager/Ports, and there it is on comm 6 labeled as Actisense, just like yesterday. I check the speed, and port configuration. That's all fine. I look at the USB port. That's fine also, and it says in both cases "The device is working properly." No it isn't you piece of claptrap PC junk. It ain't working properly at all. Back to the control panel and check the speed, and port. Both are correct, but the little box won't connect to the comm port. The PC knows it's there, if I unplug it from the computer, it disappears from the port list. Plug it in and it reappears. It's just mocking me. 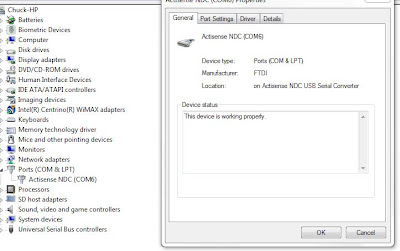 An email goes off to Actisense in my usual windy fashion describing what I have done and how I wired the little box. A response comes soonest suggesting I shouldn't have really connected 12 volt power to the little box, ground looping may occur causing my connection problem.

The first aha moment occurs. It seems the manual in the box, is not the full user manual. I download the full manual which discusses powering the box in greater detail, and ship's power is promptly remove from the box. But this doesn't solve the problem. More emails, uninstalling, and re-installing occurs. Crap, I take the disk, and the little box home and install it on my computer. It works perfectly on my computer. More emails, and then the question appears can you verify the drivers you are using are version 2.8.24.0.

Back to the boat I go for the umpteenth time and check. Yes it is. So what do I now know? It doesn't work on the boat's laptop, but it does work on my computer at home, and now my little net book also. It has to be a problem with the laptop unit, although I don't know what. The owner gives the laptop to an IT guru, and it gets scrubbed clean, updated, and all of that promotional stuff you get on a new computer is removed. Meanwhile I'm yachting on the Salton Sea. I get back and try the computer again, nope, same thing. The little box is there, but it isn't. It acts like it can't connect, because it is already connected.

I'm running out of options here. There is one more thing to try. The IT guru did not have the little box when she cleaned up the computer, so I arrange to meet her with the computer, and little box in hand. I plug it in, and show her how to set up the ports, and how it's used. I also show her that everything seems to configured correctly. She takes off fingers flying, and then gets a little frustrated, and confused. Then the really big aha moment occurs. On a whim she rolls back the driver for just the USB port back one generation to 2.6.2.0, and the little box works. It was an orgasmic moment, in a geeky sort of way, and I now know what happened.

When I took the little box back home, I plugged it into my computer, and it no longer worked. Mr Gates had been my undoing. When I first installed the little box, the CD was the source for the drivers, and the USB driver was version 2.6.2.0. Both my computer, and the boat's laptop had an automatic Windows 7 update, which noticed the out of date USB driver, and did us the favor of updating it to a current version. This was not currently compatible with the Actisense NDC-4. Subtle it was. See it you could, but work it would not. PC's just drive me nuts. Six freaking weeks. The really smart IT guru set up the laptop to never allow an update for all time to come, and I'm fine with that.

The Actisense products are great, and their tech support people stuck by me in spite of my mildly acerbic emails at times. I understand they are working on this quirky little automatic update wart.
Posted by Bill Bishop - Parmain at 10:56 AM