Hello, my name is Bob, and I'm a battery abuser. Hi Bob!

Behold the flooded lead acid battery, unfortunately a perennial favorite of all too many boaters. Why? They cost less than better battery types such as sealed or AGM's. When I say they cost less I mean they are the cheapest battery you can buy. They do work well, if you can, and do check them on a regular basis, and the hotter the ambient temperatures become, the more often you have to check them. The words of the day are "evaporation, and accessibility."

I look at Bob shuddering, and wringing his pasty white smooth hands as he stares down into the crammed full engine room. Battery problems again Bob? You had these changed just last year didn't you? Where did you get them from, Wallymart? You did? Hum-mm  ahhh, who installed them Bob? Your skinny nephew did? When was the last time you checked the water levels in these Wallymart batteries?

I already knew the answer. There were never checked, and in south Florida this is an issue. I try to wriggle out of changing batteries when ever possible. I have through the years schlepped in and out more than my fair share of impossibly heavy lead boxes oozing sulfuric acid from locations that are virtually impossible to access.

I believe that when many boats are built, the factory employees that are used for battery installs are the ones who spend so much time at the gym, they no longer have a neck. They wrestle the huge batteries to the outboard sides of the engine compartment. The engines are then hoisted in to block access. Lots of other stuff is installed to insure that it will take a herculean effort to get to them. I see your problem Bob, I think you should get your mechanic to change the batteries. It looks the exhaust system needs to be removed to get at them.

This week was less than auspicious. Jupiter had aligned with Mars, and were both trying to molest Virgo. While casting my chicken bones to project revenues, the wishbone broke. I should have stayed at home. There were two identical problems. The first one occurred when a chart plotter I had just installed was reported to be cycling on and off during a sea trial. The second problem was exactly the same, but it was happening to a chart plotter I had installed years ago.

At dock, while on the charger, both units performed perfectly. But while underway, they would cycle on and off. Since funds for the new install would not be promptly forthcoming until the owner was satisfied it was not all my fault, it instantly became the first on my list. When I tell you it's not about the money, my inside voice is yelling it really is. I go to the boat, which is thoroughly enclosed in canvas. I unzipped a bunch of yardage to get the temperature down to about 100 degrees. The chart plotter is turned on, and works great. I pull the unit to measure the input voltage, and it's 12.80 volts. This number strikes me as being a bit odd. Since the charger was on I was expecting at least 13+ volts.

I don't have keys to the boat, and in the heat I was a little short on the patience needed to pick the lock. I killed the power at the pedestal to turn off the charger, and remeasured the voltage. It was now instantly at 10.50 volts. At least one of the batteries had a shorted cell, and nobody had realized it until the new chart plotter was installed. The boat had a sea trial a few days before. The engines were started while the charger was plugged in. But the the power needed to keep spark plugs, blowers, refrigerators, and chart plotters happy wasn't occurring despite the efforts of the alternators. The voltage levels were high enough to keep the engines running, but it wasn't adequate for the chart plotter which was now turning on and off.

The second boat had an identical problem, but in this case it had diesel engines. Once started they didn't need any real Mr. Electricity to run, but this boats DC panel was lit up. Everything was on. TV's satellite system, ice makers, frig, head, you name it. Mechanics were on board doing routine maintenance when I looked at it. In this case there wasn't a shorted cell, but when the charger was turned off, you could see the voltage count down slowly to about 11.9 volts. Looking at the batteries one had obviously been boiled into oblivion, and refilled in the hopes it would be okay. It wasn't.

In the latter case, there was no way to tell when the batteries were installed. No Sharpie had written a date, and those little circles you can remove to indicate the install date were intact. This is a big pet peeve of mine. It just takes seconds to do, and even as distracted as I can be at times (Oh, look at that! It's sparkly and shiny) I always mark the date.

So back to the words of the day. A boat in southern latitudes closed up with canvas can easily achieve temperatures of well over 100 degrees, increasing the evaporation rates from the batteries. This when coupled with the temperature rise that is a side effect of charging exacerbates the problems. Add to this mix poor access to the batteries making checking them difficult. Lack of maintenance inevitably leads to the early demise of flooded lead acid batteries, resulting sometimes in a bang or worse.

There are two class of owners. Those who are ever vigilant, and those who are less so, or physically unable to. In the case of batteries, in all scenarios sealed (maintenance free) or AGM's are a better choice in hot environs. It's one thing you can look at less often. By that I mean you can't ignore them completely, but in the summer time here, flooded lead acid batteries should be checked prior to every use, and not less than once a month.

My rule of thumb is that flooded lead acid batteries should be replaced every two years. Stop that wincing right now. I know they may last longer, but when the batteries fail on the big trip you planned for months with your mother in law on board, stranding you in a godforsaken location you will wish you had heeded my sage advice. I think maintenance free batteries are good for about three years, and AGM's for at least four years. My attorneys have suggested the disclaimer be added that this depends on use, loads, and doesn't include charging systems that have psychotic episodes.

Gosh Bob, your mechanic won't change the batteries for you? Gee I'd like to help install the new Wallymart flooded batteries Bob, but I'm on vacation in..... Greenland, yeah that's right in Greenland, and I won't be be back for months. 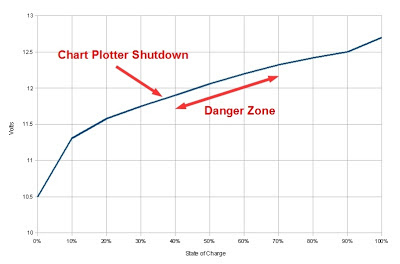 There is a simple way to get a general idea of your battery's condition. Turn off the battery switches, and everything on the DC panel. Turn the charger on, and leave the boat for a day. When you come back to the boat turn off the charger, and go to lunch.

After a long lunch, turn the battery switches on. If your DC panel shows voltage, use it and write down the voltages of each bank. If you don't have a fancy panel gauge turn on the ignition switches for each engine, and record the voltage on the dash panel gauges. A DC multimeter measurement directly from the batteries works better, there is some voltage drop by the time you get to the gauges. Another other good option is to have your tech periodically load test the batteries.

Now look at the chart. If you have 12.6 volts or better you're good to go. At about 12.3/4 volts you have about 70 percent capacity. At about 12 volts only 50 percent, and you would be lucky to get an engine start. My advice is if your standing fully charged voltage is much less than 12.4 volts, you better start shopping around for new batteries. By the time the fully charged voltage drops a mere .4 more volts you're going to wish you had a fully charged handheld VHF radio to call Seatow.

What again? The attorneys have asked me to advise you this is just a general rule of thumb, and I'm not responsible for your batteries exploding, and catching the boat on fire, or the loss of eyebrows.
Posted by Bill Bishop - Parmain at 1:23 PM