Yachting on the Salton Sea

I was excited. A week in Palm Springs, a place I had never been. Looking around online I found there were lots of things to do. Go canyon hiking fending off gila monsters and tarantulas. Nope, not for me. The cable car ride, sure that's fine. Joshua Tree National Park, that sounds interesting. Are there tarantulas there? The Salton Sea? What's that all about?


It was the perfect storm. Bad engineering, greed, financial desperation, and the belief that the Colorado river could be managed, all combined at the turn of the century to create the Salton Sea. Today the Salton Sea, California's largest lake has an apocalyptic miasma about it, and a very uncertain future. 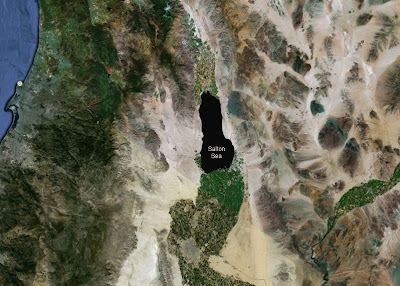 Mother nature has put water from the Colorado river into the Salton Sink at various geological times in the past, but the extreme desert temperatures have caused the waters to eventually evaporate. When mother nature did this it's been called Lake Cahuilla.


The Salton Sea's history is a bit more sordid, and starts with the California Development Company. It was incorporated in 1896 for the purpose of building a canal from the Colorado river to provide water to the Imperial and Coachella valleys in the Salton Sink.

In just two years they built a head gate on the Colorado River, dug the Imperial canal, and in 1900 water was flowing to the valleys. If you build it, they will come, and they did. Agriculture flourished, and thousands of new residents moved in. This is when things started to go awry.

The original canal was quickly, and some might say poorly built, and started to silt up reducing water flow. Residents looked to the California Development Company for a solution. Facing financial disaster, a second canal was dug downstream from the original canal, but this time there was no head gate, they thought they had time to build it later. Happy days were back again as the water gushed into the valleys.

In the winter of 1905 heavy rain fall, and snow melt caused the Colorado river to bulge and overflow through the canals into the Salton sink. Before anyone could turn around two new raging rivers were carrying the entire flow of the Colorado River into the Valley. This continued, for nearly two years and was exacerbated by what one engineer at the time referred to as "The bummer flood of 1906."

Things didn't get under control until the Southern Pacific Railroad intervened to protect their own investment. The larger of the two new rivers, the Alamo canal (the same as the original Imperial canal) was back cutting toward the Colorado river, and had created a water fall that was now 80'  high.

It was realistically feared if this continued to move toward the Colorado river stopping the flow would become nearly impossible. A trestle bridge was built over the Alamo river breach in 1907. For a two week period all train traffic to LA ceased, and all railroad assets were used. Cars would stop on the trestle bridge and dump rocks, and move off to be refilled. They succeeded at a cost of over $3,000,000. But now there was a new lake in the valley that was well over 800 sq miles in size.

There are two other major events that will bring us up to current times. In 1924 President Coolidge issues an executive order declaring the Salton Sea a drainage reservoir, and because of continued intermittent flooding of the valley, the Hoover Dam was constructed.

Things became quiescent for the Salton Sea. Mullet was introduced and harvested during the first world war. Later came tilapia, and game fish such as corvina and sargo. More people moved into the area, and then a boom of sorts occurred.

The Salton Sea became a recreational hot spot starting in the fifties. First camp grounds on the sea, and by the sixties yacht clubs, marinas, and new waterfront communities flourished. The rich and famous came to boat race, fish, sail, and play. These were good times for the Salton Sea
.

The Salton Sea however has been doomed from the beginning of its very accidental start.

The good times ground to a halt in 1976 when tropical storm Kathleen swept in and caused extensive flooding. This was followed by tropical storm Doreen the very next year. The two "100" year floods largely destroyed everything built on the sea's shoreline. Gone were the resorts, marinas, yacht clubs and communities.

Things then got ominously quiet on the Salton Sea. In the early sixties there were warnings that the salinity levels were increasing at an alarming rate, and this proved to be true. Since there is little inflow to the sea other than agricultural runoff, the sea has been shrinking from evaporation.

There was already a lot of salt existing in the ancient Salton Sink lake bed from earlier geological times. Agricultural run off has picked up heavy metals and even more salt, increasing the sea's salinity. The Salton Sea isn't quite as salty as the Great Salt Lake, but it's nearing it.

The only fish left are tilapia, and some estimates place their numbers at around 400,000,000. That's the good news. The bad news is in 1986 the state of California warned adults to limit their intake of tilapia because of high selenium levels. The even worse news is that the salinity levels will in just a few years be too high for even the tilapia to survive. As bad as the Salton Sea smells now, I can't imagine the odor and mess that would accompany 400,000,000 dead fish. 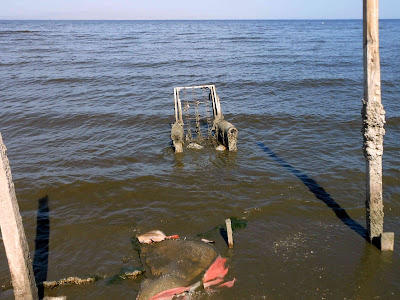 The increasing salinity, and chemicals in the sea have already taken a huge toll on local bird and fish populations. In 1992 the Salton Sea gained unwanted national attention when 150,000 eared grebe water birds died off in the Salton Sea. About 15 percent of the western population of white pelicans have also met their maker on the Salton Sea.

Massive fish die offs have been common, and I walked on a beach that was covered with a six inch layer of  fish bones. This is in part caused by fertilizers transported by the agricultural runoff causing algae blooms that eat the oxygen in the sea. 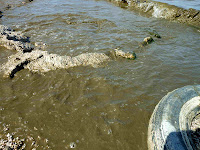 This is 2.186 trillion pounds of water and it's all sitting on top of the southern end of the San Andreas fault. A recent Scripps Oceanographic Institute study found that the Salton Sea's weight may be causing the rupture of stepover faults in the area. Report lead author Danny Brothers said that, "This research does not improve the ability to predict such a quake but suggests that heightened preparedness for a major quake immediately following smaller quakes in the stepover zone is warranted." 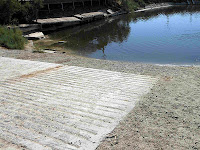 So let's now go yachting on the Salton Sea. Despite its size, to the best of my knowledge there is only one boat ramp that is usable on the Salton Sea. The ramp is located at the Salton Sea State Recreation Area. I asked park staff how often the boat ramp was used, and the answer was not often. There is a small group of regulars who do use it on occasion. Kayaks are launched at this ramp also. I saw other abandoned boat ramps, but due to receding water levels, none were usable. I never saw a boat out on the sea.

But for speculations sake, we get our yacht into the water. Where's that chart? Oops there aren't any charts. As close as I could find was a 1995 hydrographic survey of the Salton Sea reservoir. Remember the Coolidge guy in 1924, it's a reservoir. Okay we can live without the charts and still boat. Are there boating hazards? Yes, and we can start with a most unique one, sand storms. The sea is in the desert and these events can quickly reduce visibility to zero, not to mention getting your yacht really dirty.

Wind storms are a regular occurrence, and the shallow waters can really kick up a fuss. The summer temperatures can reach 110, and have been as high as 129 degrees, so put on lots of sun screen, have a hat, and gallons of water will be needed. The shoreline is dotted with old remnants of docks and structures to watch out for. Need help? The State of California recommends red flares, or calling 911. Don't bother using your VHF radio, there is no Coast Guard presence here, and remember there is only the one boat ramp for 525 sq miles of inland sea. No fuel availability rounds out the list of Salton Sea amenities

The answer is at a practical level you can't really boat on the Salton Sea anymore, and I wouldn't put any boat I owned into that saline soup. 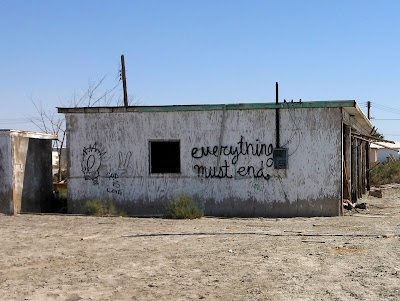 What does the future hold for the Salton Sea? I don't think anything good is going to happen. The lake will continue to shrink from evaporation, and the salinity will continue to increase. Most life in the sea will quickly disappear.

In the long run given the choice between southern California's water needs and the needs of the Salton Sea, and the billions it will take to even save a portion of it, the sea is destined to lose. It seems to be a self fulfilling prophesy. Is it worth seeing the Salton Sea, and its environs? Yes. It's beautiful, but in a devastated sort of way. Just don't bother to bring your boat. 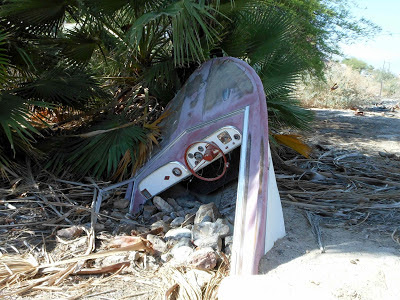 Wikipedia on the Salton Sea

Photos by the Installer