I was surprised I was even invited to see it. I met the boat at a private dock, and departed for a two hour cruise. This nav system looked sleek, but unimposing at first. It's only 1/2" thick, 14" wide and 10" high. But one should never judge a book by it's cover, and the wireless Celestronic M3 proves this.

This daylight viewable LED backlit unit uses advanced Lithium battery technology, and will power the unit for 16 hours on a full battery. What's impressive is it only takes five minutes to recharge batteries to full capacity. The helm station cradle has a built in inductive charger that is powered by 12 VDC to 24VDC ships power.

When I said wireless, I meant wireless! The base Celestronic system includes WiFi, WiGig, ANT, and Bluetooth functionality. A 50 channel WAAS along with an integrated 3 axis, gyro, magnetometer, and accelerometer are all internal to the MFD.

All of this just scratches the surface. The Celestronic M3 uses low power quad core processors running  at 3.7 GHz and operates on a Linux based open source platform. This means that thousands of software developers worldwide can produce apps for this system using their free developers kit. Specialized wind apps for sailing, engine interfaces, media management, and much more. Want to be warned about shallow water in your path, there is an app for that.

Who doesn't offer touch screen technology today? The Celestronic engineers have taken this one big step further with the integration of the 3D Leap Motion technology. Now you can sit at the helm and like Tom Cruise in his best Minority Report fashion, wave a hand to move a data box or camera view. Use your fingers in the air to grab a waypoint and transport it to a new location. Snap your fingers and menus appear, pinch to shrink and zoom, and with a small movement of a fingertip overlay weather radar on the display. 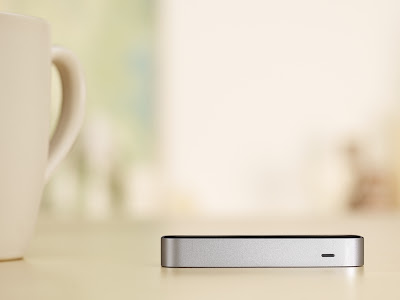 If your hands and fingers get tired, the built in 40 megapixel camera supports ETT (Eye Tracking Technology). Turn the Celestronic system on with a glance, turn down the stereo. If  it sees you fell asleep at the helm, it can sound an alarm to wake you up.

If that isn't enough, there are plenty of voice recognition apps and AI apps. Move over Siri, meet Celeste. She will get you home safely. 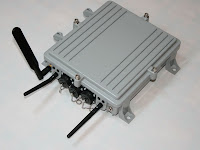 Celestronic's primary modules communicate with the display using WiGig technology allowing data transfer rates up to 7 Gbit/s. No waiting around for the data to make an appearance in this system. 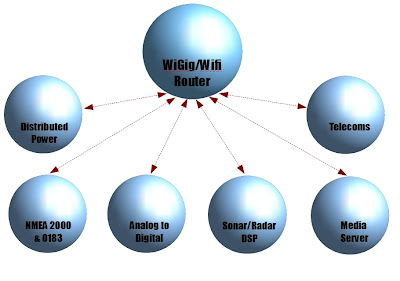 The powerful media module supports multiple cameras and monitors along with music, and video management. HDMI, component, and composite inputs lets you plug and play almost anything.

32 channels of high resolution analog to digital conversion allows you to use your engine senders, and other analog sensors as a system input.

Powerful multi-core DSP processors, and power supply are the perfect platform for sonar and radar apps. Check out their new 3D forward looking  CHIRP sonar app. You can clearly see what is under, and forward of your boat.

NEMA 0183 and N2K plug and play into this unit. Check out the 0183 translator app that takes any version of NMEA, and converts it to Version 4.10.

Telecommunications galore in this high speed clock driven system. Receive and transmit VHF, XM, and almost everything in between (FCC licence may required for many frequencies). Multiple handset, and antenna ports round out the module.

Their new AC/DC distributed power module can be used for monitoring, switching, and load shedding if needed.

The Celestronic M3 system has now opened the marine world to the latest in electronics, and the ability to communicate with all of your mobile devices such as watches, phones, and tablets. Easily integrate IP cameras. Stream Netflix in port and surf the web. And who has such a simple and easy to use user interface? Thousands of worldwide developers are working hard to provided you with the latest, newest, and most innovated software technologies available at the lowest prices. I'm impressed, and want one.

Visit us at MarineKickStarter.com today and reserve your system now.

"If you imagine it's possible, someone else is already trying to doing it, or has already done it." The Installer