Boats that spread their wings

Just as soon as the Wright Brothers figured out how to get an airplane off the ground, inventors were trying to get them to work on water. The first successful float plane flight was in the flimsy looking Le Canard in 1910. By 1923 short hop commercial flying boat service became available in Britain. The pinnacle of commercial flying boat service was the iconic Pan Am Pacific Clipper (Boeing 314) starting in 1939. Service ended in 1941 with the US entry into WWII. The introduction of the Lockheed Constellation and the Douglas DC-4 rendered large commercial transoceanic and flying boat service obsolete. None of the Boeing 314 aircraft exist today. The last one was scrapped in 1950.

Here is the vocabulary. Seaplanes can take off and land on water and runways. The subclass of this genre is amphibian aircraft. They divide into floatplanes, and flying boats, with the later being defined as having a hull. What you're looking at is a sleek Seawind 3000 flying boat, and you have to build it yourself, or at least more than half of it. You can also buy one someone else built and had certified. 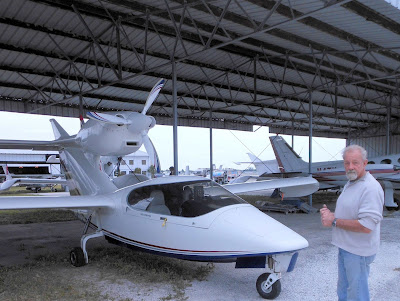 Now let's meet Chris Doughtrey. I know from personal experience he is a highly skilled, and talented builder of boats in both wood and fiberglass, a pilot, and a builder of aircraft. 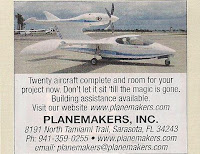 Chris, and his business partner John Januszewski are the owners of Sarasota airport based Planemakers Inc. This unique business consists of helping aircraft kit builders to complete the more sophisticated aircraft kits such as the Seawind, and the completion of kits owners have found that they either don't have the time, or skills to complete.

I think think a lot of the impetus to have Planemakers professionally finish aircraft kits comes from gentle spousal urging, along the lines of, "It's been filling the garage for years Bob, finish it or get it out of here. We look like the flying Clampett hillbillies." So a trailer arrives at Planemakers and off comes a partially built kit aircraft that has been languishing for too long. 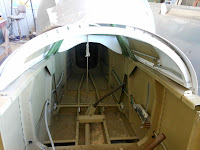 There are a lot FAA regulations about kit plane building, but the big one is the 51% rule. Simply stated it means if you buy a kit plane, you must, and be able to prove you did 51% of the work yourself on the aircraft. The other 49% can be done by outside professionals. It's actually more complicated than that, but you get the general idea.

Like building a boat, there are lot of man hours involved, and much personal dedication is required. For kit plane builders, if the job is done properly you end up with a FAA experimental aircraft airworthiness certificate for recreational usage. The other huge plus of building a kit aircraft is the substantial savings when compared to buying a new aircraft from a manufacturer. Planemakers have assisted builders in the completion of about one third of the Seawind flying boat fleet, and many other projects. 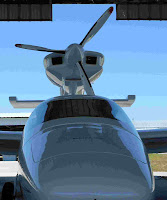 The space age looking canard winged Seawind is certainly an elegant, and futuristic looking aircraft. The pylon mounted engine removes a lot of the noise associated with engines mounted to the bulkhead in front of you, and the huge bubble canopy gives you well over 270 degrees visibility. 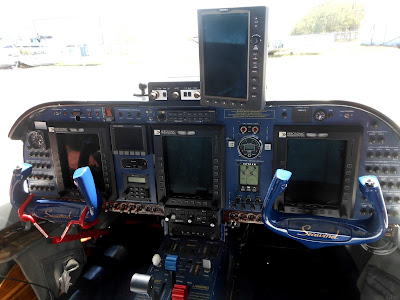 The Seawind cockpit is very wide  (52") and seats four comfortably. The design also provides lots of space for avionics, and flight controls. In this case there is a familiar name to boaters, and that is the Garmin 696 GPS that is mounted above the console. There are many other aspects of the Seawind 3000 that are boat related. 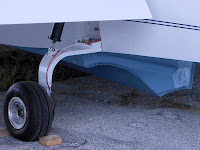 The hull is very similar to a power boat. When it's powered forward the craft lifts up on the hull steps and starts to plane. At speed, a small pull on the yoke pops the hull out of the water. Level off and climb out. 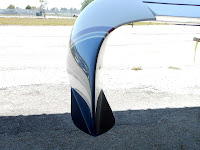 The graceful down turned wing tips provide in the water stabilizing flotation. Planemaker's designed the small planning fins to give the wingtips some reduced water drag during landings and takeoffs. 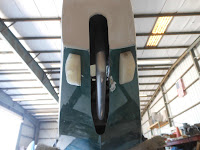 And every boat needs a rudder. On the Seawind the rudder is retracted during flight. In the water the rudder is deployed, and it's motion is linked to the air rudder improving water taxiing performance.

For a single engine aircraft the Seawind 3000 is  really quick. A top speed of 200 mph, and a cruise speed of 180 mph at 65% power. The range is impressive too. The standard configuration has a no reserve range of 1040 miles, and with extended range tanks this increases to 1460 miles. 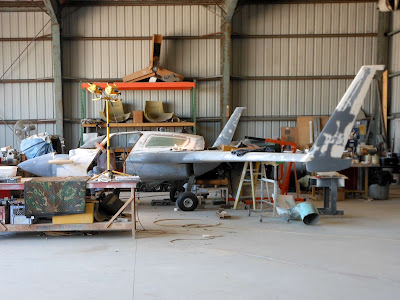 There are a number of other projects going on the the Planemakers hanger. A Velocity is being completed. In this case though, this sleek aircraft does not have the typical pusher prop configuration. 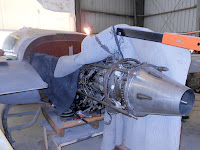 The twist to this project is this small aircraft is being equipped with a jet engine. It will end up in a mountainous region, and the jet engine will allow it to fly at much higher altitudes.

Building a composite airplane kit is similar in many ways to building a fiberglass boat, but the attention to detail, and precision required is far greater. This no place for delaminations, air voids or uncured materials that I find on occasion in production boats. The use of high quality aerospace grade epoxies predominate, and often carbon fiber is used requiring additional fillers and fairing.

After the fuselage and wings are completed, things sharply diverge from typical boat construction. Electrical wire has to meet FAA specifications, and is typically ETFE insulated. Some avionics do use NMEA 0183, but several other communication protocols such as ARINC 429 exist and are applied. Control cables or push rod systems actuate flight controls. After staring at aircraft autopilots, servo systems, glass cockpit MFD's, and comm systems my head was spinning. Too much technology, "pull up, pull up." It's very much a different world. 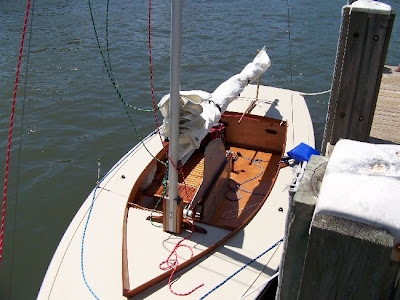 It was a fun and illuminating afternoon at Planemakers, and many thanks Chris for your time. His boat by the way is a Celebrity Sloop he has meticulously rebuilt from the skin inward.

The photo of the Seawind 3000 floating on Lake Winnebago taken by Michael Volk is courtesy of Seaplanes.org

The photo his Celebrity Sloop courtesy of Chris Doughtrey.
Posted by Bill Bishop - Parmain at 5:54 AM