Who needs Vegas when you can go to the Royal Pacific Resort. You couldn't find a better place to hold the National Marine Electronics Association's 2012 annual conference. This is my second year as judge for the annual NMEA technology awards. I was joined by Tim Queeney, editor of Ocean Navigator magazine who is this year's senior judge. You know this because his robe has the four gold stripes. Glenn Law, editor of Saltwater Sportsman is our new judge who replaced Ben Ellison. 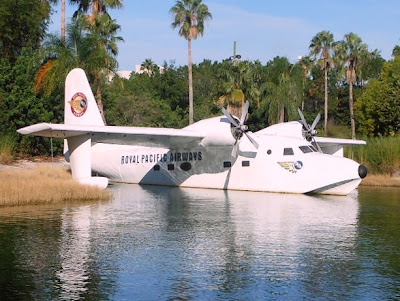 I'll grant you the plane ride is a long one, but you're met at the lagoon by friendly resort staff who wield their machetes to help clear a path to the resort check in area. 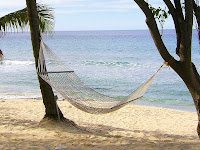 The rooms are certainly airy and all feature sunset views. The swinging beds are very comfortable, and form fitting. The gentle rocking of your bed in the tropical breezes gives you a great nights sleep. 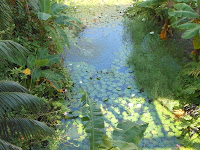 The fresh water private swimming lagoon is the perfect place to just loll around in warm volcanic vent heated water. Mix this with beverages served in a coconut shells, and you have a perfect afternoon. 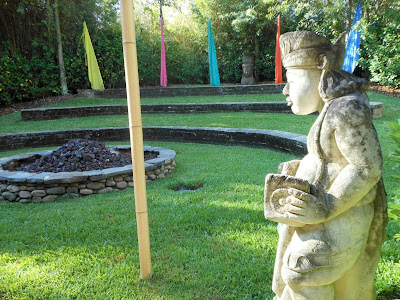 The highlight of the conference is the banquet where the NMEA technology winner is toasted by the crowd. This years winner is Fusion's NMEA certified 700 series marine stereo. There were also honorable mentions for Furuno's new Time Zero MDF, and SI-TEX's VHF/AIS antenna splitter

This was then followed by a Luau style dinner prepared by the local resort staff. The main entree was a delicious native specialty called long pig. Unfortunately the Fusion guy seemed to have disappeared before I could interview him about the award.

This years conference schedule was busy. The normal NMEA conference was overlayed with the RTCM (Radio Technical Commission for Maritime Services) conference.

The general boating public doesn't hear much about RTCM, but this group plays a critical role in developing the communication standards for DSC, EPRIB, AIS, GPS and other forms of marine radio communications and IMO electronic charting. There was a multitude of training classes and seminars, most of which were presented twice giving participants fewer scheduling conflicts. The vendor exhibit hall was open half days, allowing easy access. 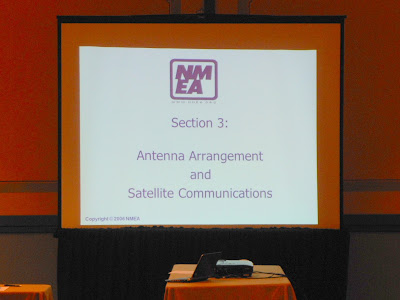 Going forward NMEA has some real challenges. The winds of change are blowing at almost gale forces at the marine electronics industry. The NMEA 2000 standard has proved to be a game changer for the better, and the new OneNet marine Ethernet standard has the potential to do the same, but...

The often disparate interests of boat builders, marine electronic manufacturers, and their dealers, big box retailers, Internet discounters, third party developers, certified or just compatible, and so on will make going forward like walking a tightrope in an earthquake.

NMEA has successfully come a long way in a very short time, and the roles of those who have to make the stuff work on a boat have changed also. Its been years since circuit diagrams have been included in manuals, and to be brutally honest, installation of systems today are largely just plug and play. The traditional electronics installer has really become a systems integrator, and sometimes interior designers. Their purview now extends to digital power distribution, audio and video, Bluetooth, WiFi, satellite communications, mobile devices, engine monitoring systems, vessel security, and often we deal with equipment built to other international standards. Then add to this the exponential increase in technology, a lot of which will have a very short lifespan.

So is NMEA worth our support? I would give it a resounding yes. Just think of what it would be like without NMEA. Things would be a mess. Every manufacturer would have differing technologies. Systems wouldn't talk to other systems. Chaos would reign and the Apocalypse would be near at hand. Maybe that's a slight exaggeration, but NMEA makes my job easier, and more importantly both predictable, and reliable. I choose NMEA certified gear first, if at all possible.

I had the opportunity to spend some time with Bruce Angus who is currently NMEA's executive director. He is an engineer by training, has business experience, terrific people skills, and is a good listener. Take this from a guy who spent decades working for high technology engineering companies, this is a rare and valuable combination. So I think Bruce will do very well at NMEA's helm, and the only practical advice I can proffer to him is to find out what NMEA doesn't do well, and then don't do it. Next year, on to San Diego. Same Installer time, same Installer channel, with four gold stripes on my robe.

The photo of the hammock was posted  by by Wikipedia user ArronY
Posted by Bill Bishop - Parmain at 12:35 PM