Okay gentlemen, here is the problem. The client wants to put air conditioning on his boat, and power it with a small portable generator. The boat will also need an AC power backbone, and breakers, along with a GFI outlet in the cabin. Oh yeah, the owner has an existing small AC inlet that he may still want to use to power the charger, and or use the new shore power/generator system. Oh, I forgot we have to do everything in 20 amps because that is all that is available at the dock.

What do you think? Yes Bob? "Well I don't know boss. The big problem with using a small generator is the surge load when the air conditioning compressor starts, but maybe if the generator is large enough it might work. You will also have to have some sort of way to stop the small charger outlet from back from feeding into the AC system. I dunno, all of that with only 20 amps? It sounds dicey to me, maybe it can be done."

Good waffle there Bob. Do you want some maple syrup on it? What do you think Harley? "Sure Chief, it's doable with some forethought. There are some technologies available to deal with the air conditioning start up surge issues, and a breaker could be installed to control the AC back feed issue." Sound good Harley, and Bob quit playing with that slide rule, you're driving me nuts. 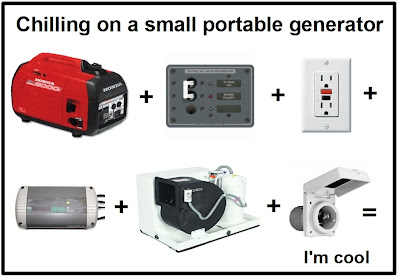 This all very doable, but Bob the "Waffling" engineer was correct about the air conditioning start up surge. It needed to be as small as possible to make all of this viable. 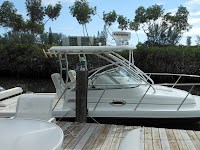 The other big help in this project was the 26 foot Century boat had been designed to have an optional AC system installed. This meant there was plenty of room for everything.

The optional equipment originally specified for this boat was the Dometic Cuddy 3500 BTU DC powered system. Although this was an option, a large number of Century owners had complained on the forums that it wasn't up to the cooling task in southern hot climates. I wrote about this system that was installed on a Boston Whaler which worked well, but the cabin was much more insulated. 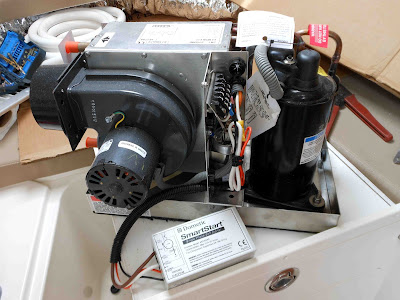 The star of the show is the Dometic Smart Start system. This small box learns how the compressor starts, and optimizes the starting cycle to reduce the surge. In larger air conditioning systems, this can be up to a 65% reduction in surge amperage.

In the smaller systems, it is still a large reduction, and in this case it was almost 40%. Translated, this cut the air conditioner start up load about 5 amps, leaving a surge of only about 8 to 9 amps to contend with. 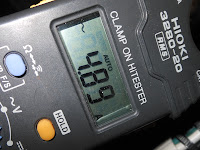 When the dust settled, the system runs at less than a five amp draw, and I only have to accommodate about an additional 3 to 4 amps total for the surge. What helps here are the mechanical controls. 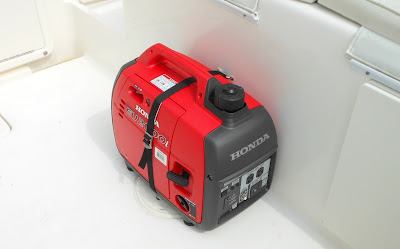 Did I say 20 amps? The reality is I want all of the gear to run at not more than 13.3 amps because this is the rated load for the Honda 2000i generator. It has a surge capacity of 16.7 amps.

This is a remarkable little unit. Quiet, weighs about 55 lbs when fully fueled, and in ECO mode can run for over nine hours on a gallon of gas.

There are also a ton of accessories that include paralleling two of these together, external fuel tanks, exhaust ports, covers and more. 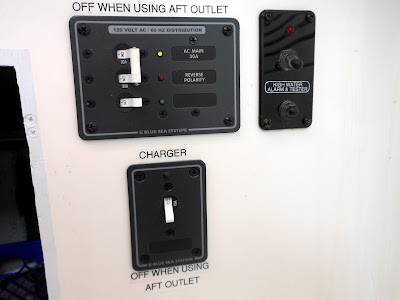 The charger breaker acts as a Mister Electricity AC power back feed preventer. There is an outlet in the back of the boat that was dedicated to the charger that the owner thought he might want to use under some circumstances.

To make this work, if the rear outlet is powered, and the standalone charger breaker is off, you can't energize the cabin panel, at least on the hot side. The rules here are to turn off all of the cabin breakers, prior to using the aft outlet. If you're just using the generator, or shore power, the standalone breaker turns on the charger. There is a GFI outlet which will be used to charge cell phones and the ilk, or possibly a small TV.

There were certainly other ways to do this, but this was inexpensive, and after the fact it was decided there is little reason to use the aft outlet anyway. 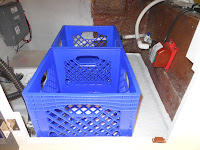 Where a hugely heavy starboard cabinet was, is now an easily accessed utility area housing a lot of ship systems with the bonus of additional storage space.

I didn't exactly turn it into a ceder lined closet, but I did do some clean up on the edges of the cut out, filled the old screw holes, and painted the floor white. A black acrylic door was fabricated, and is held closed with a magnetic catch. 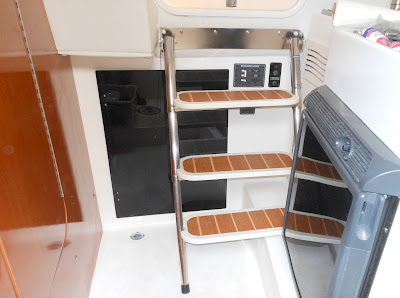 Now for a few words from the Installer's "I don't want to be a statistic" department. This includes lurid visions of exploding boats, or carbon monoxide laden bodies laying a moldering in the cabin. 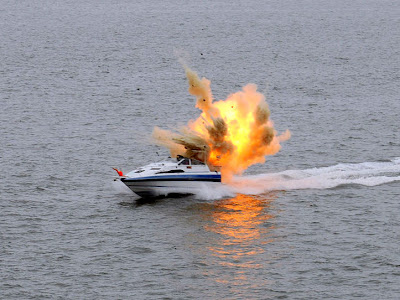 Using a portable gas generator on a boat requires some care and forethought. In this case the generator when not being used will be under a cover, and securely strapped down in the back of the boat.

When the generator is being used, it will be strapped down on the transom with the exhaust facing aft. There is a swing door that separates the transom from the cockpit. This reduces some of the opportunity to let the slightly lighter than air carbon monoxide exhaust gas from  reaching the cockpit or cabin. Pay close attention to the direction the wind is blowing. If you can smell the exhaust, turn the generator off, and all boaters should read this. The Honda generator is not to be used if there is any chance of rain, and fueling is to be done on the transom with the generator strapped in place. Just pay attention, and you will be fine.

Despite all of this, Murphy always looks for an opportunity to create new laws. A good monoxide sensor is being installed in the cabin. The USCG does not specifically say you can't use a portable generator, but care must be taken while fueling, and you always have to pay attention to the carbon monoxide gas potential.

My amperage surge numbers are a little subjective, but I think they are pretty close. My AC clamp on meter can't catch the peak of the surges because the sample rate is too slow, so my numbers are a composite of many readings. Installing the Smart Start system, is not difficult, but as I learned there is some nuance involved. I would suggest that DIY installers get some help from a air conditioning expert.

This is good solution to get air conditioning, and AC power without incurring the cost of a large and expensive vessel installed genset. In ECO mode, the generator will run all night on a single tank keeping you cool the entire time.  The Dometic Smart Start system makes this approach even more viable, and the little Honda 2000i genset can actually run up to a 16,000 BTU unit if it is Smart Start equipped. As a last note, Dometic staff did advise me that the Smart Start system didn't seem to like the power output from the Yamaha equivalent generator for some reason. Caveat emptor?

This is a good link that talks about this subject. Dometic's Director of Technology interjected himself into a Sailnet forum, and wrote an excellent piece on the Honda 2000i, Smart Start, and air conditioning systems.