Answers to some physics questions

I start most days early. A cup of coffee is made, and with bed head, and in bathrobe I settle down in front of the computer, and read Google news. I'm not yet mentally ready to write, and this is my way of cranking the mental engine until it starts. It's also quiet. The canine rugs with organs we call the greyhound girls are still asleep, and are not demanding attention. I have several custom news sections including one called boating. Mostly reading this is an exercise in futility. Drunken boaters in boat crashes, the obligatory pedantic stories about how to boat safely, USCG rescues, and the occasional misplaced "Swift Boating", but this morning two items caught my eye. 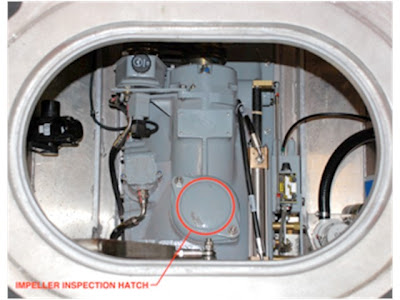 The first story is about the sinking of a Moose M2 37' catamaran with diesel powered jet drives. It appears one of the drives seemed to be vibrating, and an on board theory developed that the jet drive impeller may have ingested some foreign material such as a rope or the ilk. There were several choices that could have been made here. One was to go back to port on a single engine. The second was to continue on with the vibrating drive, or the third, and least likely in my mind was to attempt a repair.

So as the story goes a civilian on board suggested the impeller access cover could be removed (the round red circle in the photo), and the offending material could then be extracted. The problem started with the belatedly discovered fact that the access cover was indeed below the water line. The end result was as a port authority official told the New York Post, "It was like opening a window during a car wash." This was not quite a nautical description, but once you pull the cork on the "Water Genie's" bottle, it will almost always be difficult, if not impossible to put it back in. The boat's crew very quickly realized this.

Just for conversations sake, let's look at the actual dynamics of the event. A 2" hole in your boat that is one foot below sea level will let in about 80 gallons of water a minute, or 4800 gallons in an hour. Your Rule 1500 gallon per hour bilge pump ain't gonna to do the trick here.

In looking at the access cover I would guess it is about 6 inches in diameter. This gives it an area of 28 sq inches, or about 9 times the area of a 2" opening. So instead of the 80 gallons per minute, it is now about 750 gallons per minute. These are pretty scary numbers. No one was physically hurt, but there had to be some terminal ego damage as $500,000 worth of boat and gear disappeared into the briny. Since the boat was carrying enough life rafts to float 600 people in the event of an airplane crash there was plenty of gear on board to get the 10 crew members safely to the 900' away shore. So if there is a moral to the story, don't open anything below the water line, that you can't stick your finger into to stem the flow, and you should think twice about even that small of a hole. Mother nature never cares what you think or want, so check your below water line fittings and hoses often. 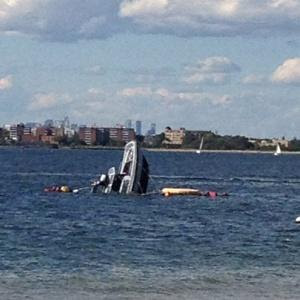 Part two deals with the opposite problem. In this case we need to keep stuff in, and not let it  out.

Governor Romney's wife Ann was involved in a unfortunate incident on a Challenger 600 jet. An electrical fire started in the cockpit, filling the cabin with smoke. The crew did a successful  emergency landing in Denver, and all ended well. A little later Governor Romney made some comments at a fund raiser as follows.

"I appreciate the fact that she is on the ground, safe and sound. And I don't think she knows just how worried some of us were," Romney said. "When you have a fire in an aircraft, there's no place to go, exactly, there's no — and you can't find any oxygen from outside the aircraft to get in the aircraft, because the windows don't open. I don't know why they don't do that. It's a real problem." Since it's the silly season, Governor Romney, was humorously pilloried in the press. I thought that was a little unfair, and I suspect a lot of people thought the same. He's not an aeronautical engineer, he's a venture capitalist, so basic physics are not his milieu.

Fortunately I have an inkling about why aircraft windows are designed not to open, and even better I have a my friend George Flavell who is an expert on the subject. George flew large commercial aircraft all of his life, and at one point in his career he was a DC-10 production test pilot for McDonnell Douglas.

So George, what really does happen if a window opens on a jet, let's say at 30,000 ft? George pauses for a second and says, "Well the first thing is all of the air inside the aircraft want's to get out, and badly. Anything that isn't tied down well in the cabin wants out also, and if it's your window, most of the stuff wants to go through you on it's way out. If your seat belt isn't on, you might also find yourself outside the aircraft with along with all of your stuff with a surprised look on your face." Okay George, so it's not good to open aircraft windows in flight, but if you do will the airplane fall apart?" No that's not likely to happen, but if the pilots don't get oxygen quickly, the plane will definitely have some technical issues when it hits the ground with the unconscious pilots in the cockpit."

I might add I think there are a couple of other things to note. I think at first things will be really noisy, but after your eardrums blow out from the rapid decompression, there would just be silence. This is a plus because you won't hear all of the screaming passengers, as they flay around trying to breath air that isn't thick enough to use. So this is why aircraft windows don't open. It's very important they stay closed, smoke or no smoke.

With many thanks to Workboat.com for the use of their annotated photo of the jet drive access hatch.
Posted by Bill Bishop - Parmain at 5:39 AM