Wedgie? Really? I'll give you a wedgie all right

This boat builder belonged to a helm design school inspired by drive in movie screen design. Wide and flat is the modus operandi. The problem on this boat is the Furuno NAVnet display is in front of the passengers seat, and the helmsman has to lean over at an awkward angle to see the display. In this little project we are going to make a wedge to give the driver a better view of the display. It should only take a couple of hours to do this with a little pre-planning. Armed with this photo, and I actually had a spare display in the office, off to Delcraft I went. Bob and I chatted a bit, came up with a design, and I left the display with him. A few day later we have a beautiful wedge assembly for less than $140. 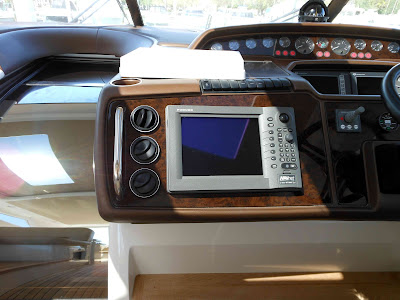 The process is simple. Pull out the Furuno display, re-cut the hole in the panel to shift it right a bit to clear the AC vents. Attach the wedge, secure the display, and job done. 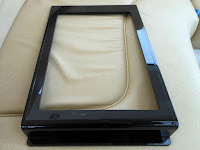 The wedge is perfect and the cut out for the display was CNC cut. Although it looks a bit flimsy, the loads will be carried by the bolted panel underneath. I had thought of everything until..... 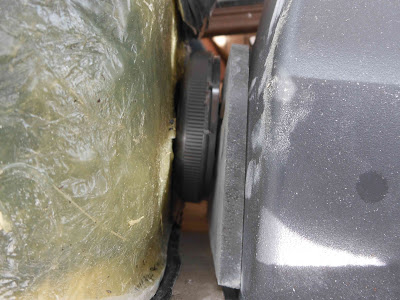 ....it came time to remove the display, and how stupid was this? This is only the start of my tribulations. When the boat was built the panel was already cut out and ready for the Furuno display. The Furuno was installed, and then a crudely made fiberglass plenum box was glued onto the panel next to the display insuring removal was not possible. 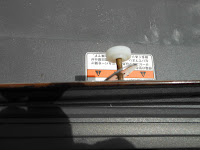 But wait, it gets even better. the panel was bolted on using studs, and plastic nuts. Good approach, so why did the chowderheads that worked there have to use an adhesive on the edges to glue it in place? 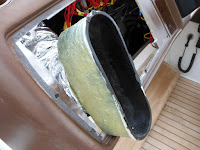 Laying on my back with an array of sharp tools, I managed to free a corner of the panel from behind, and then pried the panel off from the front. More sharp implements and cursing got the plenum box off. At least at this point a path is clear to completion. The panel is re-installed, and cut. The Furuno is installed into the wedge, and the wedge is attached to the panel. Now the fun starts, and time is running short. A tube of five minute epoxy is dredged out of the bowels of the truck, and mixed up. The plenum box is glued back into place, and silicone is used to seal the edges so it won't leak. The panel is attached into place, cables are hooked up and it's alive, and way more viewable for the helmsman. 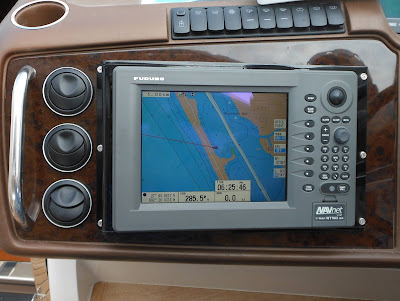 This is a well known builder, and must have known this was poor practice, but went ahead and did it anyway. One stupid thing after another. Bad helm design, kludged up assembly, and zero concern for maintenance after the fact. Five hours plus of work to do what should have been simple task.