This all started with hearing a rumor about a boat accident, that led to a lawsuit. This caused Raymarine to turn off their system's long existing capability of using GPS generated course over ground data as the radar overlay heading input. This was reinforced by Compass Marine's rant on Panbo that was similar to what I heard.

So I explored the issue, and was initially confused by what I was finding. There is the recently settled patent lawsuit that involved almost all of the big MFD manufacturers. It appeared that since there were aspects of the case that could have involved radar overlay, this could be the culprit. In the end this was not the case, and it was settled by all parties in American GNC's favor.

As for the rumored boat accident, I just couldn't find it. The one that was closest to the described accident was wrapped in somewhat of a mystery. Despite the fact that three souls were airlifted off the vessel, there is zero reference to it in the USCG records. There were lawsuits, but I could find no information regarding them. In the end I had spent way too many hours looking, and I picked up the phone, and called Raymarine. 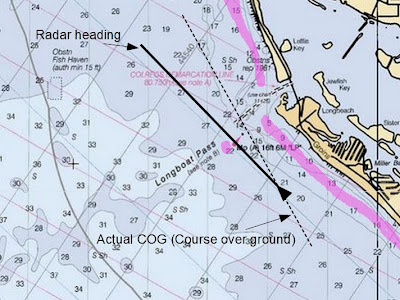 Here is the crux of the issue. COG (course over ground) is calculated by the GPS. The last fix, you were there, on this fix you are here. From this your direction of travel is calculated. The problem occurs when your bow is not pointing in the direction you are actually traveling in.

Huh, how can that be? Wind and waves have an impact on all boats, to some degree. In the picture above, the boat could could have strong winds pushing at it on the port side. In order to stay on the course line, the boat has to turn up a bit into the wind to maintain the course line. It's sort of like a long term cross wind landing scenario for an aircraft.

I have often been on boats in this scenario with the autopilot crabbing the boat upwind a bit, and you can clearly see it on the display. That being said, the view of your radar is always looking off the bow. Now if the chart orientation is being determined by course over ground, the radar image is going to be shifted by the amount of difference between the direction the bow has, and the course over the ground direction. In the example above, you can see the radar image is painting the shore to the left of where it really is along with the marker. 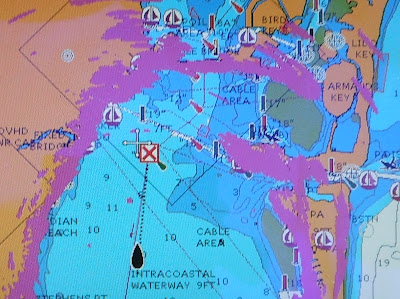 So is this dangerous? I have mixed emotions about it, but if I didn't have a heading sensor, I would rather have the course over ground overlay information available, rather than none. But in truth, a better solution is to have a heading sensor which largely removes the errors in the overlay. For boats that move slowly, the COG error can be larger than boats that travel more quickly. The picture above was taken yesterday in Sarasota bay. The MDF is a newly installed Raymarine C90 wide with radar, and no heading sensor. We are traveling at 18.2 knots, and it works perfectly. It was a calm day, and at idle speeds it worked well also.

So what did Raymarine tell me? Yes, they had disabled the capability to use COG as a heading source based on some complaints from slower traveling boats (I think that translates to sail boats). Their quality assurance professionals had voiced some safety concerns about the issue, and multiple staff assured me it was not an accident or  lawsuit that lead to the decision, just possible safety concerns. Then shortly afterwards, the market place pushed back, and they are restoring the feature, and I think this is a good idea.

Here's the catch. Their software group is very busy, and I can believe that given all of the innovation I'm seeing in their products. The earliest possible software update will be in the fall, and at worst case, early spring. The E&C wide's and newer systems will regain the overlay capability. The classic C's, and E's at this point will not get the change back. So for the classic C's software version 4.29 is as high as you can go and keep COG heading capability, and software 5.52 is as high as you can go on the classic E series. In theory, you might be able migrate backwards if you had the software, but Raymarine doesn't recommend trying this, and I certainly have never done this.

In the new Raymarine software, it won't do COG radar overlay if you are moving at less than than 2 knots, and as you slowdown, and approach 2 knots, the system will warn you. There are ever increasing demands on overlay capabilities in today's high tech navigation systems. MARPA/ARPA, AIS, waypoints, weather, radar, and if it was my boat, I would prefer a good heading sensor, despite the difficulties sometimes in getting it well placed in some vessels.

Unlike Compass Marine, I haven't had a problem with a frying pan, but anchors, buckets full of chain, the air tank for a life raft, fire extinguishers, boomboxes, and many others have given me fits. I like the fact that as far as I know, only Raymarine provides a sticker that indicates fluxgate compass location. As a last note, Furuno, and Navico system always required a heading sensor, and Garmin still allows COG heading information to be used for overlay use.

I know this was a little mind numbing because Kate was rolling her eyes, and mumbling blah, blah, blah while she read it. I am working on a batch of lighter toned, yet erudite pieces. Kate has already said no to half of my thank you notes I have in a Jimmy Fallon take off. I'm gunning for that Pulitzer.