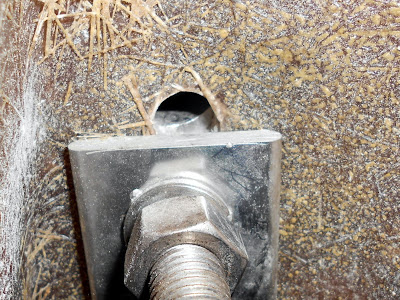 Just when you think you have seen it all, it's really just a portent there is more to come, and this one takes the cake. The picture below is the top part of the tube. During construction someone meticulously made sure a pull wire was installed, but the pipe stops at the weld. The pull goes nowhere. Even if there had been a hole into the horizontal tube, it still goes nowhere. There is no connection to the electronics box built into the hardtop, and if there was, I would have to negotiate three ninety degree turns with both my wire fish, and a 1/2 inch diameter Raymarine radar cable. It was not going to happen period. The starboard side had the three ninety degree turns, and its miserably tiny hole is already packed to the brim with wiring. Actually there were a fair number of these boats built, and Googling images, I could only find one of these boats that had a radar installed, and I now know why. 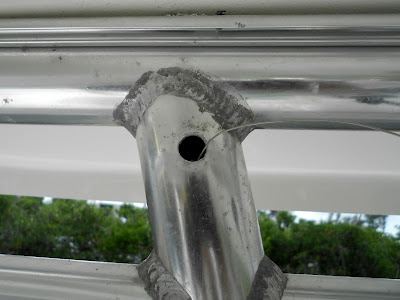 There is a new 4 kw digital radar dome now mounted on the hardtop, and the wiring has to come down somehow. Knowing there would be a problem, but not quite the extent of it, I had purchased a longer radar cable just in case. The only solution is to route the radar cable on top of the hardtop aft, and then to the port side where I am going to punch a hole down through the hardtop into the tube from hell. 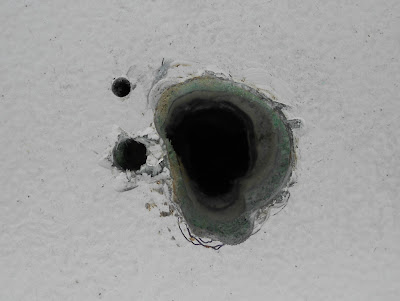 The end result was not pretty. The problem was in measuring to find out where to punch the hole. Armed with a micrometer, and a tape measure I could get close, but not at the exact location. So telling the boat to turn its head and cough, I punched a pilot hole. It's close but it's a little off center. The second hole is better, but not quite there, and the third hole is the charm. I'm going to punch a 3/4" hole, and if it is not exactly dead center on the pipe, you will be able to see it from underneath. I punched through with a 3/8" spade bit. and checked the hole. All is good, and I repeat with a 1/2" spade bit, and again all is well, and onto the 3/4", and again all is well. The problem with using ever increasing spade bits, is there is no centering hole for the bit, and the hole becomes increasingly ragged. The total distance I have to drill down is almost four inches to get into the drop pipe. The off center appearance of the hole was caused, by using a large drill bit, sort of like a glacial rotozip to deburr the sharp pipe edges. No worries, it will all be covered. 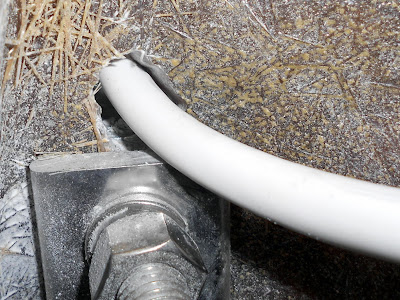 Now off to the bottom of the pull. Out comes a storage box, and a speaker, and using a rotozip the hole at the bottom is enlarged, and the cable is ready to be pulled down, an inch at a time. I hunch into a less than perfect position, and push the cable down with one hand while using the other hand to help it turn the corner at the bottom. Let's see now, 15 meters divided by one inch in new math equals a long freaking time, but patience does the trick. 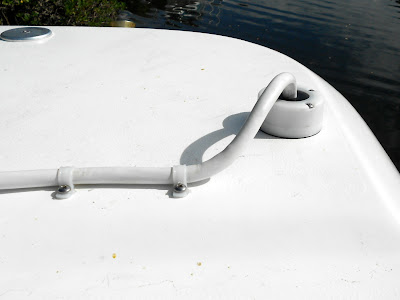 Once the cable is in, it has to be routed from the port to the starboard side, and up inside the combing, forward and then into the console. Since access to the inside of the console is so poor, the Raymarine unit has to be pulled to do the actual connection. It was a good thing I bought the longer cable, there was only about 4' feet left. One cable, one full work day to get it in place. But wait, if you order now, getting two very small wires pulled on the other side with loads of grease, and having to cut off a tiny SMB connector was another three fun filled hours, I couldn't back pull a couple of the larger wires because the wire bundle was taped together. The clever builders pulled the taped together harness to a large hole cut in the top of the horizontal pipe with the hard top lifted up. They took the bundle and ran it down through the vertical pipe, then attached the hardtop insuring it would be nearly impossible to pull any additional wiring. The builder left the pull wires just to tease me.
We leave the poor Installer, who is doomed to endlessly repeat wire pulls in badly designed boats for all time, for he is now trapped in the "No Wire Pull Zone".