This was the first time I had been to a NMEA conference, and I was there because I had been given the honor of being one of the three judges that would decide what new marine electronics product would be awarded the 2011 NMEA Industry Technology Award. Below are fellow judges Tim Queeney, (front) editor of Ocean Navigator magazine, and Ben Ellison, (back) Bonnier's electronics editor most notably Yachting, and Cruising World magazines, and publisher of, Panbo, The Marine Electronics Weblog. This was most august company indeed for this humble installer to work with. 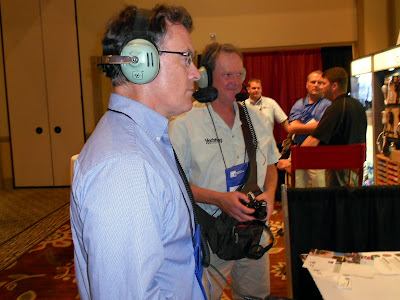 There are a lot of things going on at the conference. There is a well attended meeting to discuss LightSquared's proposed broadband cellular network that has the potential to disrupt GPS signals on a large scale, technical training, standards meetings, manufacturer's seminars, and a substantial exposition of marine electronics with the majority of the major players present. 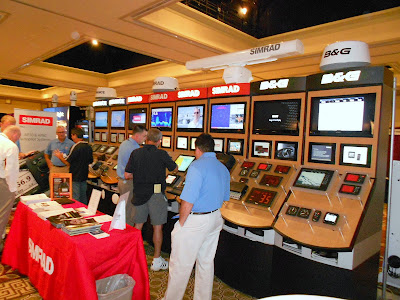 Navico had a huge display featuring virtually the entire line of Simrad, Lowrance, and B&G systems. This was my first chance to play with the Simrad NSS touch screen system, and to see the  B&G HVision red back lit sailboat displays. 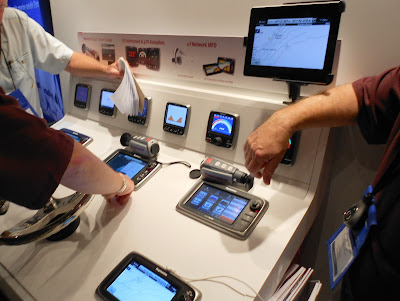 This was also the first time I have have been able to play with the impressive new Raymarine E7 WiFi, and Bluetooth enabled touch screen system, and see it interfaced to both an Iphone, and Ipad. 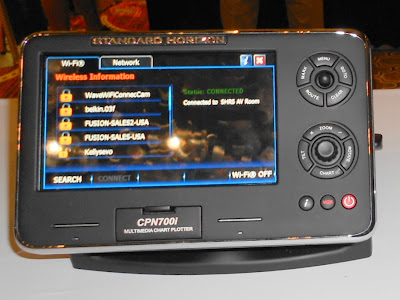 If there was a sub-theme to the expo, it would be the word "Wireless". Mobile computing is in your boat's future, and the future is now. Above is Standard Horizons new CPN700i, their fast answer to Raymarine's E7 also with WiFi, Bluetooth, and a touch screen. Adding to this technology mix was Wave WiFi, Digital Antenna, Digital Yacht's BoatraNet wireless Linux server system, and the multitude of satellite up, and down link information systems. I'm starting to think old fashion wire is going the way of the buggy whip. My off the cuff prediction is that Garmin will be showing off a Wifi/Bluetooth enabled chart plotter at the upcoming Miami boat show, or sooner. They have the technology already in the Nuvi car systems, just guessing, nobody spilled any beans to me. 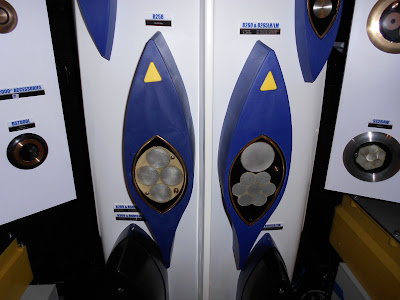 On the right side you can see Airmar's broadband B265  transducer. This 1kW unit "Chirps" from 40kHz to 60kHz at the low end, and 130Khz to 210kHz at the high end. I also learned that Airmar makes all kinds of specialized, and custom built transducers for a wide variety of applications, and some of these can really thump out the power for very deep water needs. 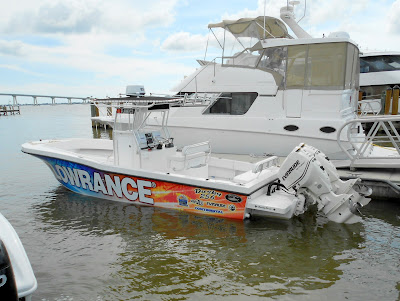 And of course there were boats loaded with the lastest gear, including Geonav's, Simrad's, Lowrance's, and the Flir/Raymarine dinner cruise boat that was loaded with Raymarine, and Flir night vision gear, with live demonstrations of the Flir camera's night capabilities. 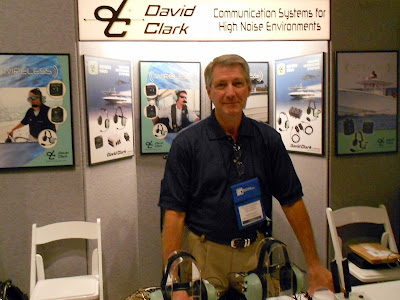 I spent three days channeling my inner geek. The judging was real work, and I had shown up having read everything I could find out about the applicants products. Part of the evaluation cycle was the judges received personal presentations on why their product was worthy of the NMEA Technology award, and all of the presentations were excellent, and animated, but the one that stood out in my mind was Bob Carroll's.
Bob works for the David Clark Company and the product he was selling was a wireless gateway marine intercom system. The product worked flawlessly, and substantially exceeded the specified range capabilities, but Bob's segue into the history of the David Clark Company, and its products including space suits, anti-G suits, and aviation systems made me look at the his product in a whole new light. So the Installer has made up his own award category titled "Best Dog and Pony Show", and Bob won it hands done. I have been a salesman most of my life, and I know a first class pitch done by a professional when I hear it.
So who won? There is no point to me telling a story that has been told well already, so visit Panbo and find out, it was a worthy product. Many thanks Ben, and Tim, I enjoyed it immensely, and appreciated the opportunity to play.
Posted by Bill Bishop - Parmain at 10:29 AM