Once upon a time a good local electronics repairman could fix your marine gear. Manuals had pages of circuit diagrams in the back of them. Of course then, TV's were black and white, and you could take the tubes out of them and test them. The trade off was the gear was very large, and was full of antique transistors, capacitors, crystals and the ilk. There are still a few of these specialized technicians around, but nowadays most marine electronics are repaired by replacing the bad board, or more often warranty repairs are done by replacing the entire unit, lock stock and barrel. The huge hole you see below had a VHF radio in it that has now joined those who are dearly departed. 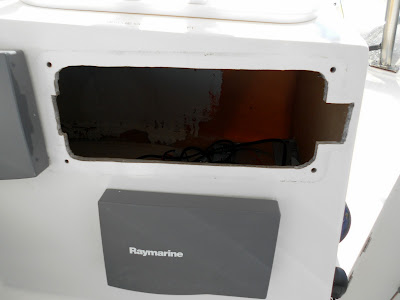 The owner had removed the corpse for me, although I would have rather done it myself. He thought it would save me some time. But I spent more time locating, and verifying the old wiring that had fallen into the sea of colorful spaghetti inside the console. This is normally a simple job, measure the gaping maw, call in an order for a acrylic plate, attach new plate, cut hole, install radio, fin. 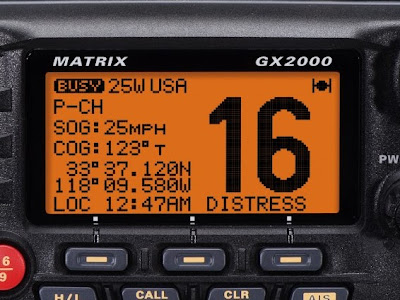 The antique VHF radio that passed away, did not have the newfangled DSC feature, and the boat was sporting a late model Garmin 4212 chartplotter, so I explained to the owner the advantages of having the DSC feature enabled on the radio, and acquired the task of interfacing the VHF to the chartplotter. Alas, this is where the simple task that should have taken just a few minutes went awry.
The VHF I selected from a multitude of available options, was a Standard Horizon Matrix GX2000. It was the winner because the owner wanted a radio that was black, and had a twisty knob to change the channels. Because the boat was large enough I also snuck in the possible downstream need for a hailer, and or foghorn. At a little over $200, the GX2000 filled the bill. 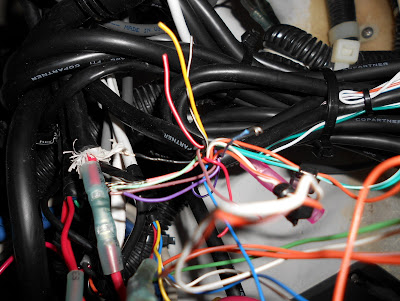 I clamber under the console to find the NMEA 0183 interface cable, and it's not to be found, but there is a huge bundle of wires with a zillion tie wraps holding the mass together, and I can just see some small colorful wires buried in it. About twenty five cut ties later I find the NMEA cable, but where are my pink and gray wires? I will shorten this part of the story up. What the first moronic installer had done was to take the interface wires he didn't use, and cut them off so there was about an inch of the original six remaining. He took the amputated stubs that were left, and folded them against the cable, and mummified them in wad of black electrical tape. This was a huge P in the A. The wires, what's left of them, are extracted, and with much difficulty I manage to make the connections. Whew, that ugly little piece of electrical connection work is done, and I wriggle out of a hundred degree console to check the work.
So I go back up, turn on the radio, and look at the GX2000 screen, and if you look at the picture of the screen above, that is what I saw. The little icon (Darth Vader Star Fighter) in the upper right hand corner tells me I am connected to the Chartplotter and it has the position. But since the vessel is in dock, I'm pretty sure the SOG of 25 mph is wrong, and the lat long is certainly not right. WTF, what going on here. I recheck the wiring, and it seems okay, and I have done this dozens of times, often enough that I know the gray wire goes to the blue wire, and the pink wire goes to the green wire. Hmmm, maybe I have to drop the pink/green to ships ground also. Nope no change, and I undo the connection and scratch my head. 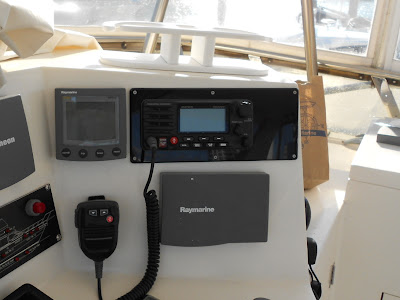 I pick up the phone, and call Standard Horizon, and just as the tech comes on line, I realize what is going on. When I bought the radio, I had called in the order to the store. They didn't have one in the box, so they packaged up the display unit, and the freaking radio was in DEMO mode!!! If I had turned the radio on before I did the interface, I would have realized it, but in my anal retentive way I finished all of  the wiring before I turned it on.
It never occurred to me that it had a demo mode in the first place, often there is just a printed screen facsimile on the protective plastic overlay. The nice guy at Standard Horizon walks me through a two handed button pushing sequence that wipes the radios settings, and in seconds the lat long is right, and all is well. Is there a moral to this story? I'm not sure, it's enough to just say "it's a boat". By the way, the lat long is in the LA area, most likely Standard Horizon's offices, I didn't dig any deeper than that.
Posted by Bill Bishop - Parmain at 10:49 AM