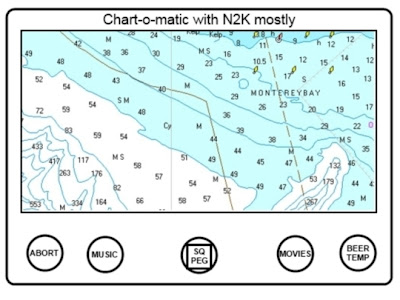 I listen to the story, and start to ask some questions. Jerry punches the buttons on his machine, and we get to the NMEA 2000 devices that are connected to his system. Instead of two engine names, the name of a chart plotter manufacturer is there twice, Huh? "Whooee, What's up with that, what's up with that?" What's up is the engine manufacturer had a chart plotter manufacturer design, and build the N2K interface, and it works, in a Machiavellian sort of way with their own equipment, but this is more difficult to do with any other system. The interface requires software in their system to configure the engines, and once that is done, it sends out a mostly compliant N2K data set that can be seen by others. The alternative is you can purchase a digital gauge from the engine manufacturer that can configure the interface. Once the interface is configured, you don't need the gauge, or the other company's chartplotter.
Five hours on the phone with tech support staff, (Sprint loves me) reading dozens of forum pages written by frustrated users, and if this would have happened during happy hour, I would never get that valuable drinking time back again, ever! The technological Dementor's have been sucking the soul right out me, while trying to get concrete information about this issue. 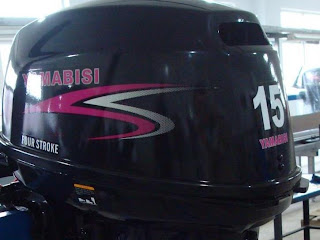 So as a colleague reminds me, a story has to have a bottom line, and here is mine. This should be easy, a cable plugs into the motors brain box, and the other end plugs into a standard NMEA network. It should not require buying special gauges, dealing with sneaky non-compliant sentences, mysterious black boxes, weird connectors, adapters, gender benders, and being probed by aliens to make it work. Motor dealers also need to be a little smarter on the subject, and very recently a big dealer couldn't even quote the parts needed to interface one of their outboard motors to a N2K backbone. You're compliant, or you're not. I don't even care if you don't pay for the certification as long as you are compliant. And no more technological weirdness please, life is tough enough.


By hook or crook, I will temporarily acquire one of those pseudo compliant chart plotters, do the engine setup, and return it to whatever source I connived it from. It should work, I think. If the battery is ever disconnected will it lose the programming? Rats!


The six phases of any project:

Enthusiasm
Disillusionment
Panic
Search for the guilty
Punishment of the innocent
Accolades for the non-participants
Posted by Bill Bishop - Parmain at 9:07 AM

Email ThisBlogThis!Share to TwitterShare to FacebookShare to Pinterest
Labels: NMEA 2000