Last week I had my head stuck under a console for about a couple of hours, and when I climbed out from underneath, and looked around. My keen powers of observation said something is different here, and how in the world did this vessel even get into the marina? To my knowledge, I think this is the largest vessel to ever port into Sarasota. Let me now introduce you to the Seafair "Grand Luxe". The popular press calls it a yacht, and I won't dispel that term, but in reality, this vessel is a purpose designed floating art exposition venue of substantial proportions. 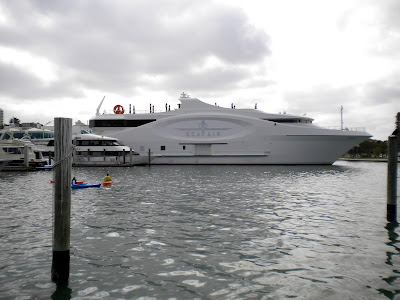 Seafair is the brainchild of David and Lee Ann Lester who are the owners of  International Fine Art Expositions. IFAE produces art shows in cities around the US including Miami, Palm Beach, Olympia, and many other locations. Seafair provides the opportunity to bring fine art shows to locations that otherwise might not be feasible.
So since this site is primarily about boats, let get back to the boaty part. Seafair has been variously quoted in the press as being the fourth largest yacht in the US, and this is true, if it is in the category of "US built yachts", and if we call it a yacht. But nevertheless it is certainly an audacious vessel on a "Grand Luxe" scale with many unique design features.

The vessel was swarmed with local TV news crews trying to get various shots, when I inquired if it was possible to meet the captain. Much to my pleasure, a couple of minutes later, Captain Craig Matthews came down the gangplank and invited me aboard for a tour. 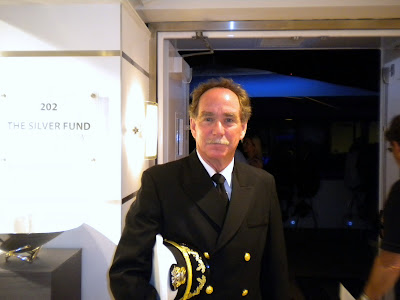 So lets get to the details, she is 238' overall, 220 feet at the water line, has a beam of 46' and is 2800 gross tons ITC. But the most amazing thing is that the draft is only 6'6", and this is what allowed it to enter Sarasota Bay. In fact the shallow draft, and a height that is just short of 65' were important design considerations, because this is one of the largest vessels ever designed to be able to travel through the majority of the US Intercoastal Waterways.

Seafair's design is a collaboration by naval architects Luiz de Basto who did the vessel concept design, and DeJong and Lebet. Seafair was built by Nichols Bros shipbuilders. Since the ship is set up as art gallery space (11,000 sq ft on three decks), the environmental requirements dictated no windows for lighting control, and to create lots of wall hanging space. The large ovals in the center of the hull where the ship names are located, are designed to be removable, and windows/ports added later if desired. The entire gallery portion of Seafair can be completely sealed off with a series of water tight bulkhead doors, and there is considerable security in place to safeguard the art. 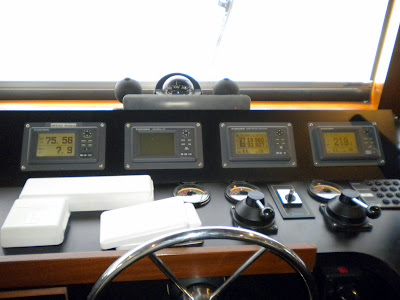 The bridge is commodious with a 180 degree forward view, and is equipped with a Furuno black box nav system supporting two open array radars, and a class A AIS system. Additional backup navigation systems include both Nobeltec, and Captain/Capn software packages. 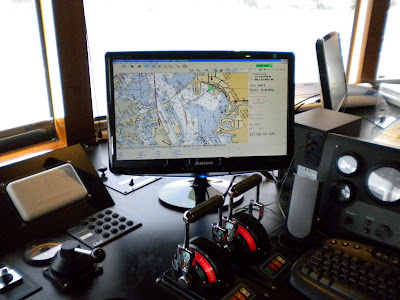 The bridge also has extensive digital ship monitoring systems, and a multitude of both interior, and exterior camera views all user selectable. 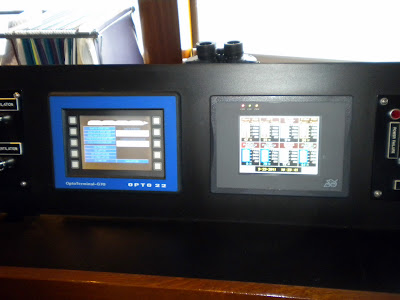 Along with all of the digital wizardry are analog engine gauges pictured below along with the thruster systems, and shifters. Seafair is powered by twin Caterpillar 3412 engines generating about 2000hp, and cruises at about 8-1o kts 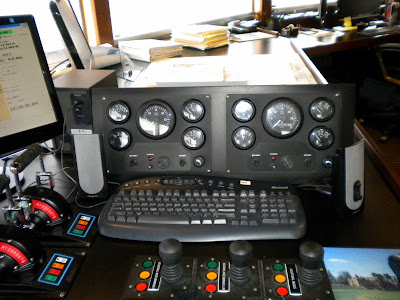 But to be honest, the thing that impressed me the most, was the back up navigation system you see below. Captain Matthews assured me these were the most up to date charts that could be purchased, and they are. If you look closely, you can see the top chart shows Sarasota's Big Pass, an oxymoronic name for this continually shifting piece of nature's work, and the chart underneath is the adjacent gulf coast waters. 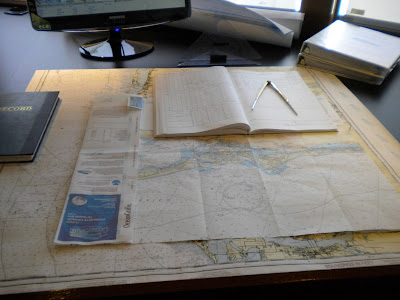 Although this is quite old school, these classic navigation tools are in daily use on Seafair. I have zero doubts that if the all of digital systems failed, this captain would have no problems in seamlessly, and safely taking this vessel to its destination. As a further measure of Captain Matthew's prudence, he used his own personal boat to survey our shaky pass, and the marina prior to bringing Seafair in. 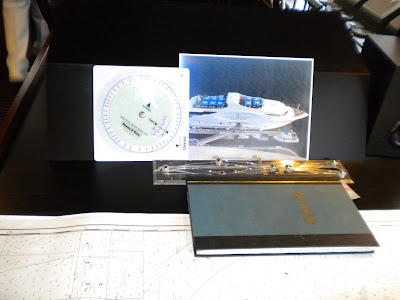 If you look closely at the picture below, you can see that there are no dock lines being used to secure Seafair, and further, the bow of the boat is sticking out about 100' feet past the dock. This is because the ship is held in place using "Spuds". 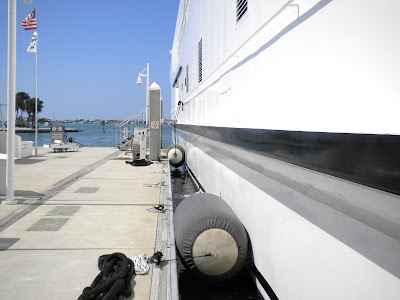 You can think of spuds as 10,000lb pointed steel shafts that slide out of the hull bottom, and can protrude downward up to 17'. There is one spud forward near the bow, and two aft on the port and starboard sides. Once the ship is in position, the spuds are dropped, securing the vessel in place. 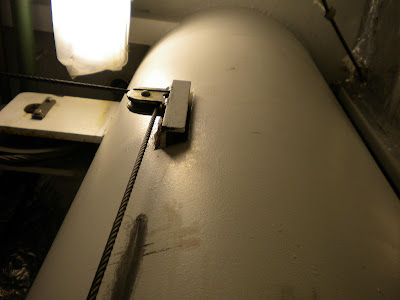 To depart, large winches haul the spuds back up into their tubes, and you are ready to go. 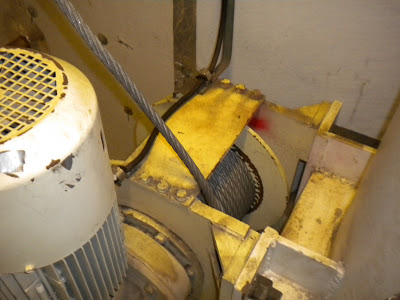 Another clever aspect of Seafair's design are the ducted propellers mounted slightly above the keel to provide protection, and if you look to the right side of the photo, you can see the pointed starboard aft "spud" sticking slightly out of the bottom of the hull. 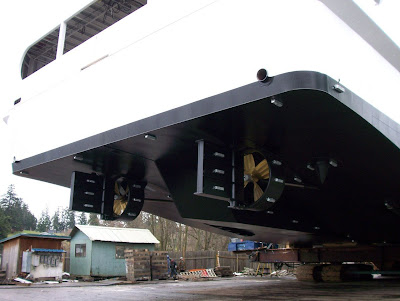 The layout of the ship is straightforward. The lower deck is primarily ship systems, some office space, and crew areas. Deck one is gallery space, and has a coffee bar. Deck two is also gallery space, with the Luxe Lounge aft on sort of a fantail deck. Deck three is split between galleries, the full service Sapore restaurant, and the pilot house. Deck four is the more causal alfresco Bistro 360 restaurant and bar which as the name suggests, provides great all around views.
Seafair was quite the talk of the town, and it drew massive crowds. Over 18,000 people visited the ship over its five day stay in Sarasota. 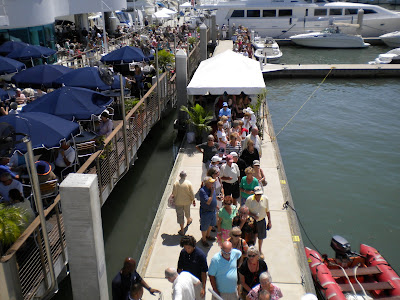 Kate, our friend Ann and I visited the ship on preview night, and it was a lovely experience. This is the part where I am a little over my head, and I'm not going to pretend for even a second that I know anything about art, and I won't subject you to any bad cliches on this subject either. But art is what the vessel is about, and it's inseparable from it. Let it suffice to say, that there were many things there I would love to have hanging on my walls, and Kate spent a small fortune of our imaginary funds also. 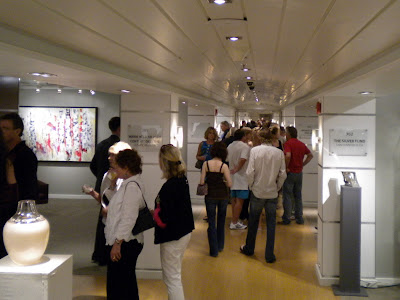 I picked my favorite two pieces of art to show you. I have given this some thought, and I think the reason I liked them, was the simultaneous appeal to both my techie left brain side, and to my woefully art deficient right brain side. 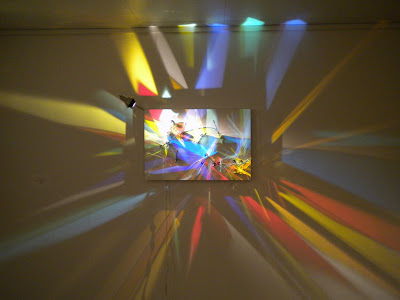 The piece above is a "Lightpainting" by  Stephen Knapp. A single light source strikes the painting, and bounces off of different forms, shapes, and reflective colors of glass, spraying the reflected light out beyond the confines of the painting, and onto the surrounding walls. My left brain tells me this does not happen by accident, and my right brain just likes it 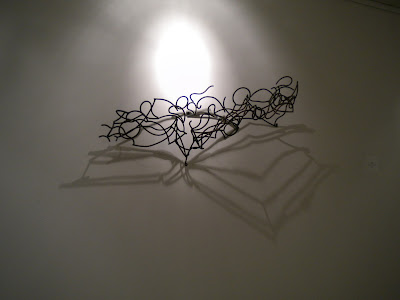 My other favorite is Larry's Kagan's Shadow Sculptures. An abstract appearing tangle of metal becomes an image when again a single light source is turned on. My left brain tries to says draw the image you want to appear, project the planes up at an angle towards the light source, and drat, I don't know exactly how he does it, but I liked it.

Both Stephen Knapp's, and Larry Kagan's works were being exhibited by Jorge Brinkerhoff from the Collectors Corner located in Naples Fl. If you're interested in learning more about these artists you can contact him at ccorner@thephil.org

So in on a Wednesday morning, swarmed by press and crowds until the following Tuesday morning, spuds are raised, thruster fire, SeaFair Grand Luxe does a graceful pirouette, and heads out towards the Gulf. Life on the Sarasota waterfront has now returned to its Abby Normal status quo. Seafair's next published port of call is Newport, in late June followed by Martha's Vineyard, and Greenwich. Seafair certainly is a classy dame.


The photo of Seafair's aft bottom is from the DeJong and Lebet website.
Many thanks to Captain Matthews for taking the time with me, I know he was extraordinarily busy, and Ashlea Heck, IFAE's press and media coordinator for her gracious assistance.
Posted by Bill Bishop - Parmain at 7:45 AM