Sealed up for all time

It ostensibly was an easy install. Stick a weather receiver on the hardtop, a quick and easy pull into the console and plug the little beastie in. The mechanics of the job are simple. Remove four nuts along with the collection of assorted washers used as shims for the cap nuts and some threaded bolts that hold the antenna mount to the plate. Right under the plate is a commodious pull to the console. So far so good and less than fifteen minutes have been expended and then everything went to hell in a hand basket.

This should be a piece of cake job. It's not like I haven't encountered this scenario before but it begs two points. First when you install something on a boat you should anticipate that someday you will have to remove it. Secondly although not intuitive you can do things too damn well and this is a case in point. 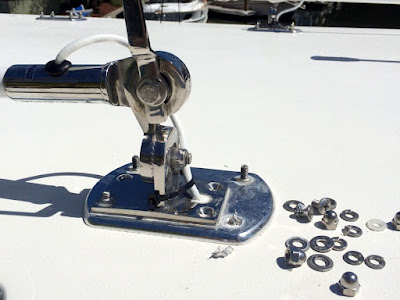 Yeah I remember. Now the fasteners are all removed. It's time to take off the the plate but it won't budge and neither will the antenna mount. I have a passing niggling thought. The wiring is very neat with a zillion tie wraps keeping it that way. There is a school of thought that theorizes any slack anywhere in a wiring harness will cause eternal damnation in some godforsaken fiery pit.


I go down into the console and yep everything coming out of the down pull tube is in a tie wrap iron maiden. Back up on top now armed with some small tools I nibble away at the goo encapsulating  the antenna wire until I can break it free. It comes loose and much to my relief there is some slack and it appears to be just enough. 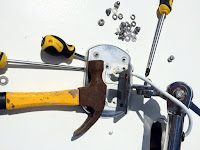 The mount won't come loose. I scoot around on my butt, grab a hand hold and using my foot and considerable effort and it snaps loose. The entire underside of the mount had been coated in a 3M 5200 esque goo. The mount is now free, sort of  and on the plate is a perfect male mold of the antenna mount bottom.

This was a portent of what was to come. I try to get a small screwdriver under the plate to wedge it up but this isn't going to happen at all. I go back to the truck to get my oft used Mr. Hammer and a collection of screwdrivers. Hammers are an essential tool for any marine electronics installer.  The plate is thin enough it could be bent. As you might gather this isn't a good thing so removal needs to be done in a patience careful way.

Pick a corner, any corner, and beat a screwdriver under it. Use a smaller one to keep the gains in place, and repeat for about 30 minutes. All of a sudden you can start to hear the crackling and popping sounds of the adhesive separating. Wait for the sounds to stop. Wedge some more. More sounds and in another 15 minutes of doing this the cover suddenly pops free. 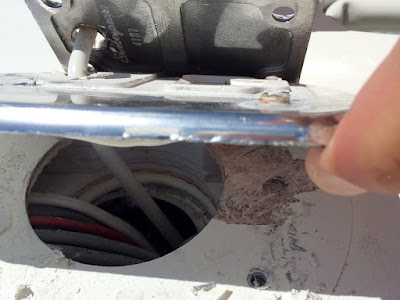 Alas the release is a bit of a bummer. The adhesive was so tenacious a largish portion of the gelcoat and some fiberglass is stuck to the plate and has delaminated from the hardtop. I use a small screwdriver as a chisel to cut the gelcoat and glass on the other side and the damn thing is finally free. There were some hairline cracks on the other side but some artful caulking will cover it.

The rest of the job was as it should have been. The cable pull was easy and the connections went well. The builder's installation of the N2K network was perfect, a sight I rarely see. Every wire was labeled and there were two unused tees to plug into.

The problem was why they assumed that nothing would ever be added to the hardtop and that plate would have to be removed. This was a case of using the wrong sealants, and way too much of the goop. I used a white polyether caulk and put a ring around the outside of the the plate, the bolt holes and the center hole, and reassembled it. It's water tight and it will only take a modicum of effort to remove. The next tech won't thank me, it's what he expects to encounter from a good boat builder. Elapsed time to do a one hour job, 3+ hours.
Posted by Bill Bishop - Parmain at 10:23 AM