If you can imagine it, it's already happening

How quickly is technology advancing? The answer is exponentially. I used Gorp as an example paddling across a river on a floating log around 10,000BC. The bolt of mental lightning had struck. Gorp no float. Log float. Gorp sit on log and float. It would be another couple thousand years, and many toes lost to piranha before the log was hollowed out by Urp to make a canoe. The reality is an early man was probably using crude boats made from reeds and bamboo much earlier than this, they just didn't survive through the ages to prove it.

The point of the diagram is to show the relative rate of technological change. In my graph, it took Gorp about 5000 years to evolve from paddling to figuring out you could use the wind and save the calories. Looking back from today's perspective it seems it should have been obvious, but it was a long hard slog to get there. Gorp only had stone tools and they weren't exactly precision devices. The weaving of fabrics is still over 5000 years away in Gorp's far future when the first sailboats will finally appear. Crikey, we didn't have the practical tools to make boats out of wood planks until the Bronze age when the rocket scientists of the day started producing tools out of metal. This was 7000 years later in Gorp's future to come. Things started to move much faster when we learned to write things down saving the information we have learned. The printing press sped things up too. 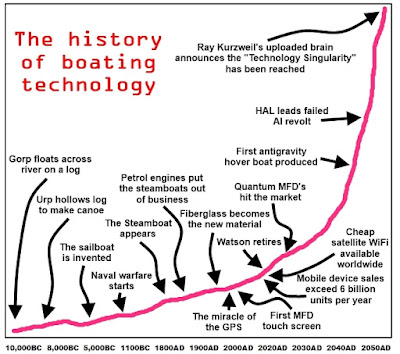 The next big jump takes another almost 3000 more years when steam engines started to provide propulsion. After this boat tech starts to really accelerate. Gas and diesel power appears and boats get faster. New boat building materials like steel and eventually fiberglass cascade into the market place and we are now at our current time provided by a GPS satellite.

Perhaps instead of dealing with Gorp and the passing of millennia a better example of technology growth is this more recent one.

It took 80 years to get from the telegraph to the radio and only 7 years to go from the transistor to the integrated circuit. A little over ten years later the microprocessor appeared. Within a single generation computers, the internet, and WiFi appear and the tech advancement curve sharpens upward dramatically.

I have two takeaways. The first one is the consumer, meaning us, drives a huge portion of the technology advancement curve. Products we buy create the huge volumes of manufacturing which in turn drives down costs. At the same time, the competition for these huge markets forces new technology and features to be continually added to satisfy the consumer's seemingly insatiable demands. TV and phones are good examples, along with cars and a zillion other things.

Consumer demand doesn't drive all technology change but it's a major player especially on the manufacturing technology side of the fence. Other sources of technology growth include governmental (military space, et al) research and development that transfers downward into the commercial sectors albeit at a slower rate. Navico's impressive Halo radar with its gallium nitride amplifier is a good recent example of using military developed tech. Lastly, basic research and applied science have their roles to play.

Product life is becoming increasingly shorter. Products become obsolete not necessarily because they wear out, but newer products do much more much for equal or more typically less cost. The Raymarine Classic E120 in ten years and multiple generations later has been replaced with the es120 which in real dollars is half the price and substantially more advanced.


In a futurist mode here are some predictions based on my perception of needs in the marine electronics world.

Problem: Chart plotters have been a technological island. Although WiFi connectivity has become all the rage MFD's still had very limited connectivity largely confined to proprietary apps, download, and uploads. The exception is Standard Horizon which includes a basic browser in some of their products.

Prediction: Within five years most chart plotters will have full internet access capabilities with browsers and the ability to use amplified WiFi access points and external antennas. We are on the edge of this change now. There are some methods to connect an MFD to a hot spot via a router but information on how to do this is not easily available, intuitive, or included with most systems. This is also where Signal K has an important role to play.

Problem: Mobile devices work poorly on boats due to poor environmental packaging, displays that are not daylight viewable, and fragility.

Prediction: Three years will solve these issues. Rugged and waterproof phones already exist with up to IPX8 ratings and a small few already have daylight viewable displays. Within the 18 months or less daylight, viewable displays will become generally available resulting in more aggressive adoption and use by boaters.

Problem: MFD's are currently single purpose computers that support interfaces to some specialized subsystem such as sonar, radar, and power distribution systems.

Prediction: In four years or likely less MFD technology will start to merge with mobile device like hardware technology and will start adopting the Android OS (or possibly an Android/Linux hybrid) with large solid state hard drives. The Android OS is already is used by 85 percent of all smartphones sold worldwide. This will enable the use of common off the shelf features like Alexa/Siri style AI assistants with speech, access to over 2 million apps, video streaming, large volume chart and document storage, and other general purpose computing capabilities. In short outside of proprietary subsystems, the MFD will gradually become accessible for third-party applications.

This will occur because the MFD's lower volume non-special purpose and custom system hardware costs will continue to stay flat while the staggering multi-billion annual production (2.5B est 2017) of mobile device hardware costs will continue to fall while increasing in capabilities. Specialty process subsystems will still be required for radar, and sonar, and a few other DSP and large bandwidth applications.

Problem: Autopilots have little if any awareness of the world around them.

Prediction: In the next six years autopilots will start to utilize inputs like automatically acquired MARPA and AIS targets, machine vision and throttle controls along with the improved chart and hazard data to aid in piloting. This will be in part tech derived from both the drone and automotive industries. 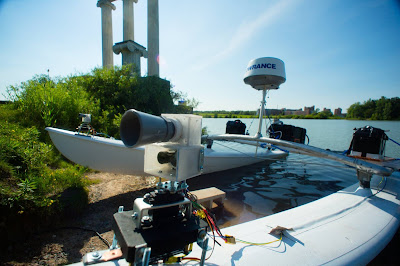 Problem: Chart plotters are losing the external alarm circuit that can actuate a loud alarm for anchor drag, shallow depths, and other emergency conditions.

Prediction: Oops, we have started to move backward here. In general they once all had this feature which is now rapidly going the way of the Dodo. Only Furuno and some Navico products retain this important feature. Mobile devices are filling some of this void with apps.

These were easy predictions for me and in a couple of years, I will either be declared "Seer" of the year or I will be running clutching my hat with stars and moons away from a large crowd with torches and pitchforks.

Some of this is starting to occur already. There is more usage of MFD WiFi capabilities working its way towards our boats, however, its been half a decade since WiFi first appeared in an MFD and its functionality is still pretty limited. The recent adoption of (AHRS Attitude Heading Reference System) commonly used in drones is now present in several marine autopilots. Furuno's TZ Touch 2 is using the Android OS and is one theoretical generation away from being able to supports apps, Google Chrome, and other similar software packages. All of the things I have prognosticated are already commonly used in other markets.

So what slows down marine electronics innovation? For starters, the marine electronics market is small when compared to other consumer markets and is dominated by a small group of companies. The other reason is their development efforts have to be spread across a large number of very complex technology platforms. Just adding a new radar or sonar product can eat up a considerable portion of these company's research and product development budgets and they're betting the family farm on its sales.

Competition in this small market also has to contend with the leapfrog effect. There are a few recent examples of this. Raymarine was the first to introduce WiFI embedded in an MFD. Within a year the others were all forced to include it in new products or end up behind the curve. Navico was the first with CHIRP sonar, and the others had to follow or get out of the way. Its clear innovation has had a dramatic effect on this niche market.

The last five years have given us WiFi, Bluetooth, CHIRP Side Scan, Down Scan, Live phased array sonar, pulse compression radar and more. Although difficult to quantify exactly my sense is the level of marine electronics technology has more than doubled over the past five years. I think it will do it again in just three more short years. Tighten your seat belts and batten the hatches. HAL 9000 is coming to your boat sooner than you think.