This is really about a empirical person dealing with doubt. Mixed in with this is faith. These terms seem contradictory but they are actually very intertwined. My empirical side says I understand Ohm's laws to be correct. I can test this in a variety of ways and prove, at least to my satisfaction Ohms laws are immutable. In this dimension at any rate. The faith part is my belief that tools I use to deal with Ohm's laws are telling me the the truth. Doubt occurs when you have a conflict in the evidence you perceive so off we go.

This should have been a simple job. I'm going to add an on air digital TV antenna to a boat. I'm familiar with the boat and what's unusual is everyone of these boats I've seen came with the antenna already installed by the factory but not this one. On my first visit I chat with the owner to see what he wants. The laundry list is short starting with he only has a shore cable connection, cable TV gets bleaker every day in marinas as providers switch to digital cable, and hence he wants a TV antenna.

Like most typical first meetings the owner wants to have at least a clue what this will cost, and how long will it take. This is often followed by mentioning the inevitable trip that can't be taken without the work being done, and this trip is always just around the metaphorical corner.

It's time for a little exploratory demolition and I take my screw gun out of its holster and start pulling screws. It's a good day for both the owner and myself. Although the antenna wasn't installed the wiring for it was. Two coax cables run from the upper bridge on the starboard side, go forward to the console, travel over to the port side, and then aft about 10' where they dive downward through a black hole into the abyss below and end up behind the TV in the lower salon.

Good deal the cables are already for us to use. Piece of cake I tell the owner. I'll be back in a few days with the gear and we'll slap it in. Yeah sure. I didn't listen to my own inside voice yelling at me. It's a boat? How many times have they screwed you? Something will go wrong you idiot, and it did. 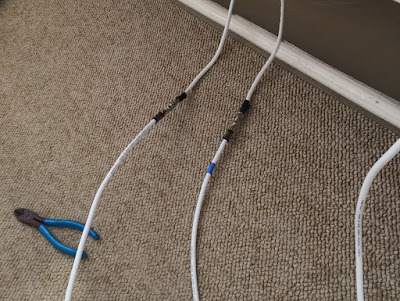 Fast forwarding to the present I drag my bag, new antenna, and extra gear I had bought, and it's hammer time. The wiring on the upper bridge is access by pulling a small fridge, and out it comes post haste. There are the two cables just sitting there, and would you look at that, they have wire tags. Boy you don't get to see that often. Meet wire number 49, and 50. One is for a upper bridge TV, and the other is for the not installed TV antenna.

The owner had already pulled the TV, and the yawning maw of a cavity behind awaits my probing. Yep there are two coax cables coiled up, and look, they have wire tags also. I scrutinize the tags to verify they are my friends numbers 49 and 50, but they're not. They are both labeled number 247. Synapses frantically fire and I now have a niggling itch in my brain.

These have to be the same cables that go up right? I mean I see them coming down as part of a big bundle. They continue down past the cavity, and it appears they are joined with other coax cables which then rise back up to the splitter. I can't visually verify and follow the two needed wires, but they have to be they ones I need. 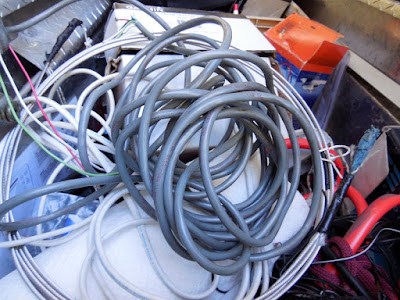 I mumble under my breath, "I need Ohmer.'" Whose Homer?" asks a puzzled owner. "Sorry, its my name for about a 20' piece of grey wire I use to ohm out circuits. It's long enough to reach each end of the cables." Back two minutes later I strip back the cables to expose the shields, wrap one end of Ohmer around one of the cables and tell the owner to hold the wire in place. 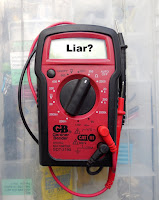 Up on the bridge I set my volt meter to Ohms and check for continuity on both cables. Nada, squat, zip. The other cable below is connected, and WTF is going on here? There must be a break somewhere..... or maybe its not the right cable.

A fleeting thought occurs. Maybe those cables were routed to where, if the boat had the one of those Glomex AB switch twisty knob plates, but where would they have put it?

The owner calls tech support and gets some vague advice and I listen on the speaker phone. The story goes something like, "Well we don't have a lot of information but I think it would have been located in that immediate area. It's possible the wires you're seeing would have been the ones coming from the Glomex box, and the ones you want are also in the neighborhood.

A short scene occurs. The lower cabinet is largely emptied, and access panels removed. In a fit of pique my nippers start at the top where I can see the cables going up and zip ties rain down. Now I can follow the cables around and the ones I had been assuming were the right ones, were the right ones. Damn it all they are. I connect Ohmer up again and retest, and crap, still no continuity.

The empirical guy now thinks there must be a break somewhere in the pair of wires. My meter definitely says so. The owner asks my if my meter is actually doing its job correctly.

I take Ohmer and my meter and show him it works  Hmmm, but what if my meter's battery was weak. It will Ohm Ohmer's 20 feet, but what if with the extra 50' added it can't? I guess it's theoretically possible but I think this is a low probability thing, but then again maybe.

The owner asks is there another way to test the cable? Yep, we could use a tone generator and wand, but I don't have mine with me. The owner picks up his phone, makes a call, and says my neighbor has one, I'll be back in a couple of minutes.

Tech support is called again to inquire it there would be some sort of a connection showing on the diagram. The tech says I don't think so. BTW was the boat ever shipped by truck? No one here knows, and then the light went on.

If this boat had been on a truck, the hardtop with its arches, the windshield, and the console would have all been removed. To do so the coax cables would have been cut. Since the boat didn't have the TV antenna, or a TV on the bridge when the boat was reassembled the cables were never reconnected, and this was what had to have happened.

The new tech is employed, and connected to the cables below and it seems sort of to tell the same story. You can hear the signal, but it's very faint. On a whim I go the point of the cable, and check it there. There is a strong signal when both cables are connected. Out comes a utility knife and I slit the cable sheath at the same midpoint and Ohm the cable with Ohmer's assistance. It Ohms perfectly. Somewhere in a marginally accessible spot under the console, and although I can't see it, those damn cables were cut.

I had the empirical evidence, I just didn't have the faith. It was an interesting lesson. A more interesting question is can you reverse the formula and use faith to empirically verify something?  I'm not so sure you can, in an empirical way, at least in this dimension.
Posted by Bill Bishop - Parmain at 1:31 PM