Okay, maybe last year's Jalapeno Spam, bacon jam, and bacon bowls app was a little over the top. Dr Dave wasn't particularly happy with it and wanted nutrition information about it in the piece which was a real tedious P in the A to do. Belatedly I figured out that using adjectives that described fried Spam sticks as glistening and lubricious was most likely why Gourmet magazine sent my recipe submittal back shredded.

So this year we're going to tone it down just a skosh, while still providing two Rant galley tasty and tested apps that won't immediately cause a heart attack. Sigh. This year it's cheesy bread with a healthy twist, sort of, and bacon strips with chocolate, not quite so organic or healthy, but really good. 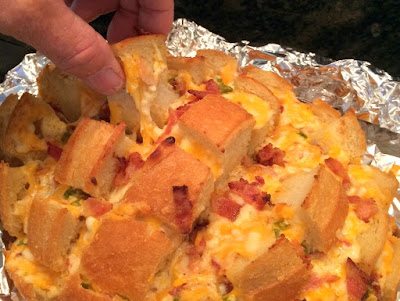 The Cheesy bread ingredients are pretty simple. You will need the following:

A 2 lb round loaf of bread, and this isn't easy. The only round bread at the store was pumpernickel. I ordered a round sourdough loaf and waited two days to get it. It only weighed 1 pound so close enough for Rant work.

One half cup of butter. Health alert, Smart Balance tastes just as good, and is better for you so that's what I used. It will make up for some of the other deficiencies like the....

Garlic salt, and not too much.

Something green you're not actually going to eat or taste as garnish to make it look better. 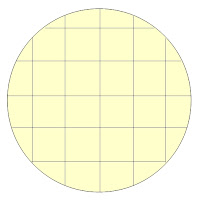 This is an easy although tedious app to make. Note the scientific illustration to your right. You're going to slice the bread downward, but not all of the way though making a grid of about 1" squares. Use a real bread knife to do this. The others will make it look like you used a machete. 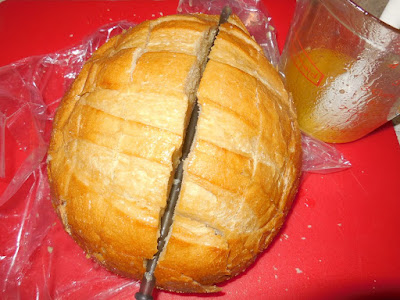 The next two steps are what makes this app a little difficult to do and will require some imagineering in your galley. In short you gots to gets the various goos somehow jammed into the cracks you cut into the bread. If you used a sharp knife you can barely see the cuts.

You take the butter/Smart Balance, add the garlic salt to taste, and liquefy it in the M-wave or stove top. So now you're supposed to in effect paint the insides of the cuts you made. Most recipes are really vague about how you're supposed to pull this off without destroying the loaf in the process.

References are made to a plethora of kitchen utensils like basting syringes which I don't have. Spoons? Who are you kidding, I don't have a week. Pastry icing bag, nope not in the collection. A pastry brush I do have and I'll make it work. Somewhere in the bowels of the drawer of kitchen tools not oft used where things like melon ballers hide I found a plastic straw for a large go cup. That'll do pig. 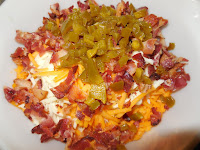 Cheeses, bacon, jalapenos, and whatever else you want to add in goes into a large bowl for mixing. Spoons won't work, blenders will turn it into a paste so what's left? Stick your hands into the bowl, and mix it like your making meatloaf. Work it like a mule until you have a reasonably homogeneous yet still coarse mixture.

Now using the straw again to open the cracks, use a knife to push the cheesy stuff into the cracks. There is a fine line here. You need to slightly overfill the crack with out forcing the cracks to open too much, and the cheese will settle a bit as it gets melty. 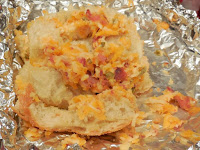 You're done with the mechanical assembly now. Wrap the whole kit and caboodle in foil and toss it into a preheated 350 degree oven for twenty minutes. Uncover the top and give it ten or so more watching it to make sure the bread top doesn't get too crispy, meaning burnt. Serve ASAP


Serving it right in the foil seemed a good option to me, mostly because the cheese escapes and spot welds the loaf to the foil. The cheesy bread went away in short order. Much faster than the raw vegetables with ranch dressing did next to it. Tasty, cheesy, reasonably healthy and a struggle to make so I have a sure fire back up that's quick and easy. 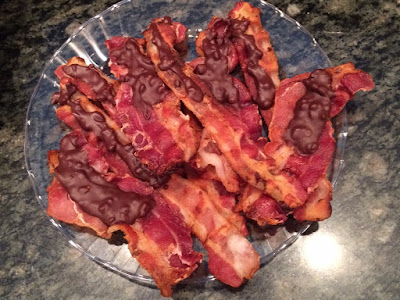 TaDa! Who doesn't like bacon? Who doesn't like chocolate? So make them harmonize. Fry up bacon strips slowly so they stay flat and don't turn into mobius strips. Melt some good chocolate that's hard at room temperature in the first place. No Hershey's kiss's or the ilk. Don't be a cheap here, and you won't need a lot of it. A three dollar bar that has real chocolate in it will do the trick.

Place bacon strips on parchment paper, drizzle the chocolate onto the bacon leaving clear the end as a handle. Let cool and you're done. The plate lasted about 15 minutes. There's something about sweet and salty mixed together that our taste buds really like, and with the bacon flavor added it's great.

The "Bottom Line", borrowing Practical Sailor's parlance, is both apps were good, but I'm left mildly dissatisfied especially with the cheesy bread. Don't get me wrong, as apps for a cocktail party on the fantail of your yacht they will disappear in short order, while the Kimchi and sardine mustard dip languishes, but it wasn't new. It won't be talked about after the party, unlike the Spam sticks and bacon jam were. In effect although tasty, it was pedestrian and I can do better. It's time to let the old meet the new. I'm thinking molecular cooking and exploring the concept of making a bacon Spam infused foam served on glass potato chips and passed through a habanero pepper fumed plume. We'll see.
Posted by Bill Bishop - Parmain at 12:05 PM