It's too damn hot!

I'm sure when this boat trailer spare tire exploded it was heard. That's one bodacious rupture and it happened where you see it in a dealer's lot. There is plenty of tread left, although it's clearly not a new tire. So what caused this? I know exactly what happened. It's just too damn hot in Florida. 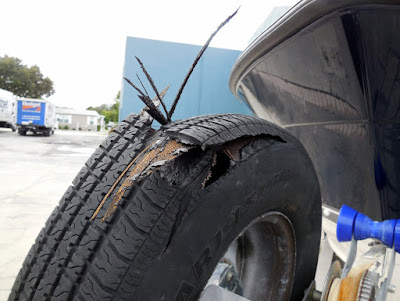 I don't really like summer at all, and especially where I live, notably Sarasota. It conjures up concepts like oppressive humidity, sweat soaked clothes with its accompanying miasma, highs in the mid nineties for endless months, and  UV index's that are nearly off the scale.

In the month of August, only four days were "Very High", that's a UV rating of 8-10. All of the rest were in the "Extreme' category, That's an 11+ index rating. You can hear the melanoma tumors growing on your skin. You start to give some of the odd looking bumps on your skin names. Hmm, is George getting a little bigger? I better have someone take a look at Clancy. That's not a color known to nature. It's no wonder half of the residents flee the area during the summer, leaving me and mosquitoes infected with encephalitis for company behind.

All right, its not all bad. We get a few weeks of fall usually in December, ten days of winter in January and February, and in March the temps start to rise again. Today for most it's a lovely fall day. For me the high today is 88 degrees with a relative humidity of 76 percent.

Now back to the tire thing. I've seen this scene before on trailer spare tires. It's exposed to the sun and gets daily heavy UV exposure. This imbrittles the rubber making it prone to cracking. The top of this tire got the most exposure. 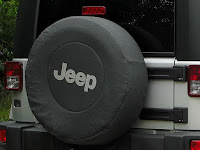 The second thing that was going on were the temperatures. They had been in the mid to upper nineties. But with the black color of the tire the upper surface temps could easily be 130 degrees or higher.

As contained air heats up it expands and causes the pressure to increase. The formulas to calculate this are complex but I would think at an educated guess the pressure increase could easily be as much as 5psi or more. This means a tire inflated at 32 psi when cool is now 37psi.

Given brittle rubber, high temperatures, and increased pressure the beastie blew no doubt potentially voiding the bowels of anyone in close proximity when it happened.

There is some good news. It was better to have it happened where it was, than have one of the trailer tires go flat and putting the damaged spare tire on. Oops two flat tires, with one failing traumatically. There is a fix, they call them tire covers, and they cost about $10.00 and up. It's a whole lot cheaper than a new tire. Better safer than sorry.

In addition to tires, UV exposure and heat can do bad things to other common materials found in the boating world. Your inflatable boat materials can be damaged, and like the tire heating will cause the air pressure to increase. Although I wouldn't anticipate a traumatic failure like our tire example, it puts a strain on the seams and weakens the adhesives starting at the exposed edges. Epoxies will degrade, and gelcoats suffer. Lines made of polypropylene and other similar materials will more easily abrade. That pretty red vinyl pleather stuff in the cockpit will fade over time to a dull pink, and develop a tendency to crack. Last but not least I often see the dreaded black blob every growing larger on instrument displays that aren't protected and the list goes on. Cover up you and your boat and you will both will live longer.

The redacted spare tire/tyre cover photo is from Wikipedia and was taken by user M 93.
Posted by Bill Bishop - Parmain at 8:49 AM