"Can you install these transducers without a fairing block?" I was asked. "I don't know, what transducers?" came my muffled squawk from the interior bowels of the boat. Let me climb out of this god forsaken  hole and take a look."

My response was, "Sure you can install them without the fairing block, if they are pointing straight down. But these aren't level, not even close to level. Who installed these things?" The factory was the answer. The fairing blocks were still in the box along with the apparently unread instructions. This was Thursday morning and the boat was delivering Friday afternoon. I still had a lot of other things on my do list like finishing the autopilot and the security tracking system. What is the art of the possible in this case? Not much methinks. A plan is needed. 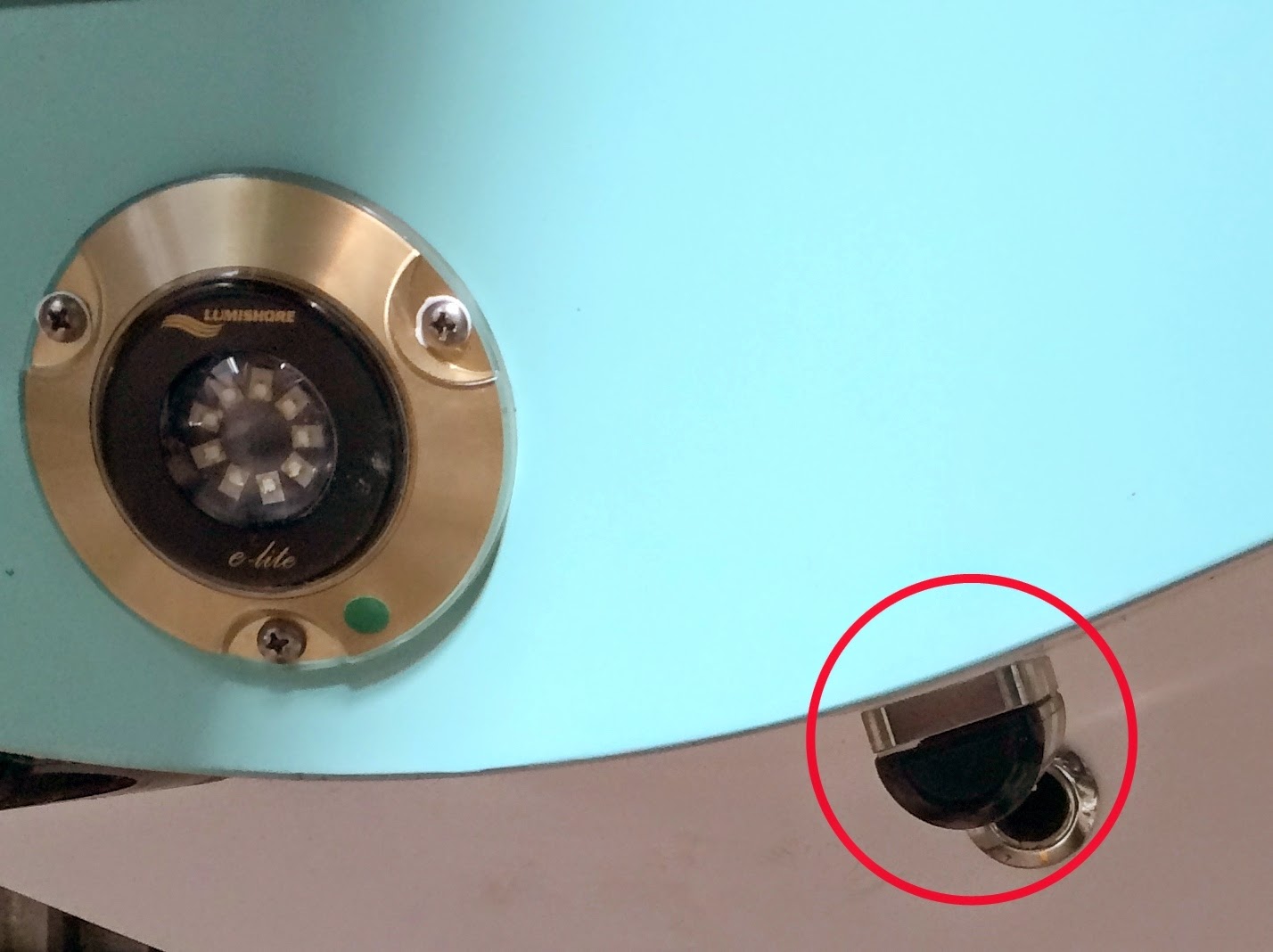 Okay, stuff happens, but this was an expensive screw up for everybody. These are Garmin through hull transducers. They can be tipped maybe up to about 5 degrees without the world ending, but my eye was saying these were something on the order of 20 plus degrees out of whack.

I grabbed my phone and used the Gemeco app to measure the deadrise. The measurement was 23 degrees, not good. I condemned the installation on the spot. It's not going to work at all is my pronouncement as a professional sonarologist. Even though the directions obviously hadn't been read, it could be possible the left and right sides could have been swapped also. That wouldn't have really have made anything better, but it would be the icing on the screw up cake if that was so. 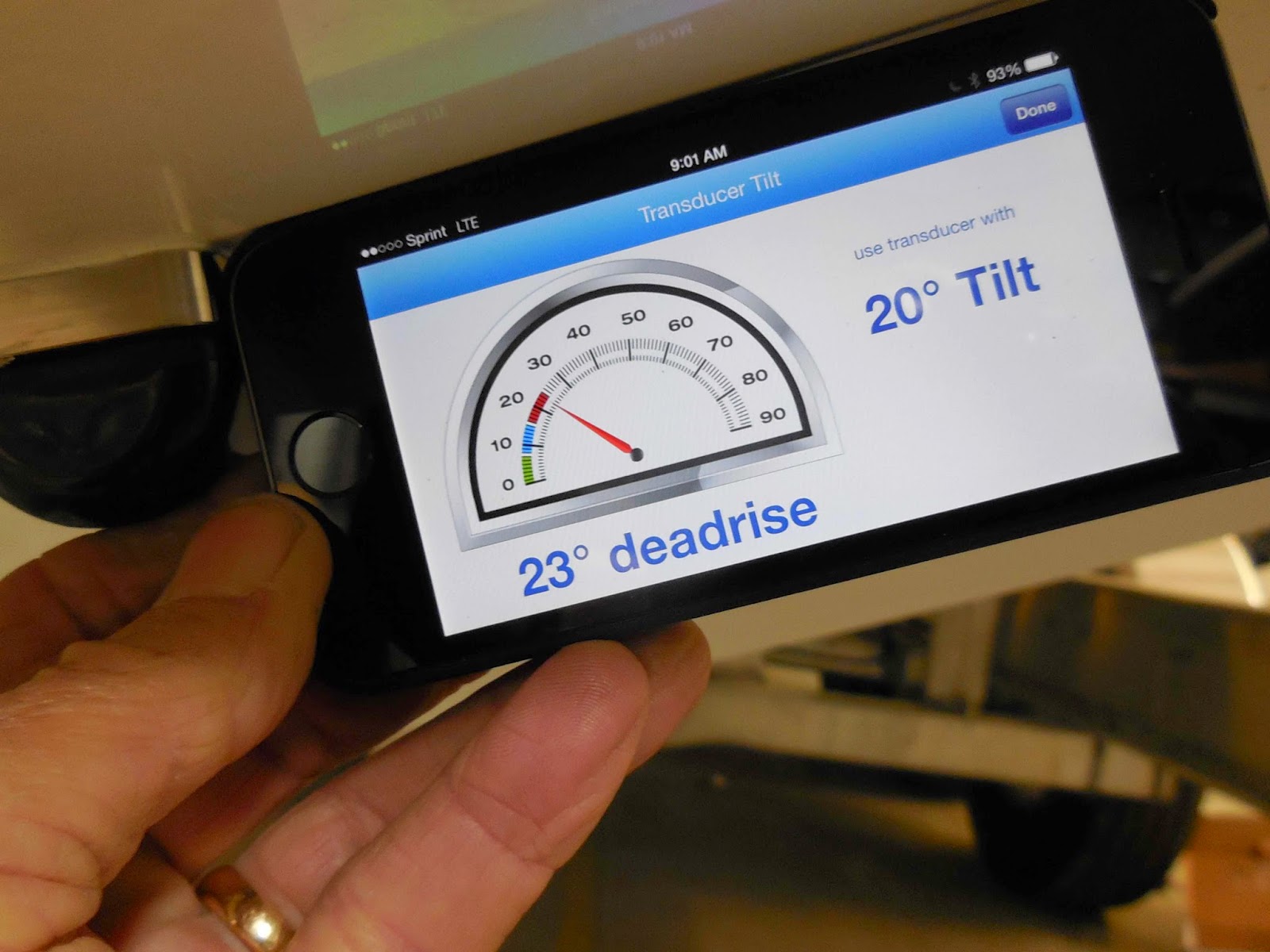 Plan A is discussed. Could we get the transducers out of the hull, cut the fairing blocks, clean up the parts and reinstall them? The answer is a very conditional maybe.

The maybe is because the installer used both of the bolts when only one was needed. With the stem there are now three hull holes packed with 3M 5200 goo times two.

Problem two is although the stainless steel base is very sturdy, it's likely while trying to pry the transducer away from the hull the transducers will be damaged.

The next issue is if you damage them, you better have the replacements ready right then and there. This decision occurs about 2:00pm on Thursday. A new set of transducers will arrive early on Friday morning, and they did but it's now time for plan B. The boat needs to be delivered on Friday so it can get some running hours on the engines before a trip scheduled on Wednesday. The decision was made to install new transducers later. Lastly, if this was my new boat I would be aggrieved and would expect new ones to be installed.

I mean by the time you pry, poke, wedge, whack, slice, beat on, curse, and all of the other verbs I could apply to dealing with an ugly extraction, the transducers automatically become used and abused. Rode hard and put up wet so to speak.

Plan C becomes the final version. Leave the transducers in place, let the boat get some hours over the weekend, and on Monday morning the let the games begin. We'll beat those transducers out of the hull and replace them properly with shiny new.

I got to play with the boat briefly on Friday afternoon. Fifty degrees, wind twenty plus out of the north, 2' chop in the bay, but the goal was to get the compass swung so the chart orientation wasn't wonky. We did this inside a local marina in the lee of some condos to escape the wind. It worked well enough, but the final autopilot setup will have to done later in calmer conditions 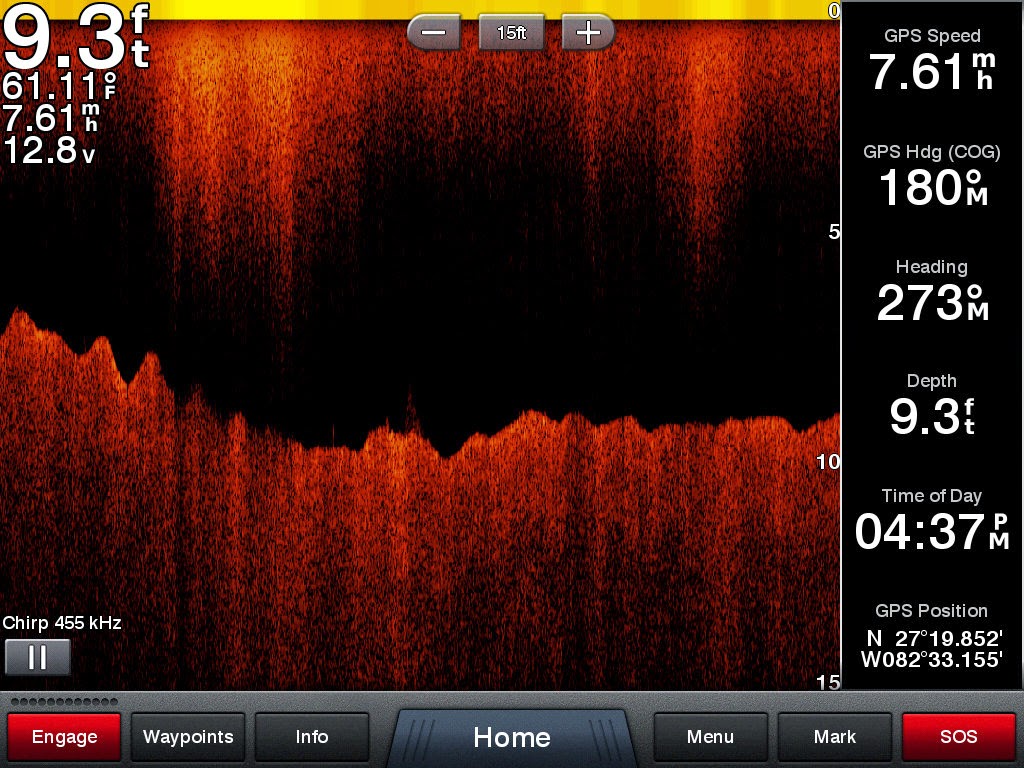 On the way to the marina I was able to judge the down and side view transducers performance. The down view transducer despite leaning away from the bottom 20 degrees sort of worked in a one dimensional way. You could see the bottom profile but with little little detail. 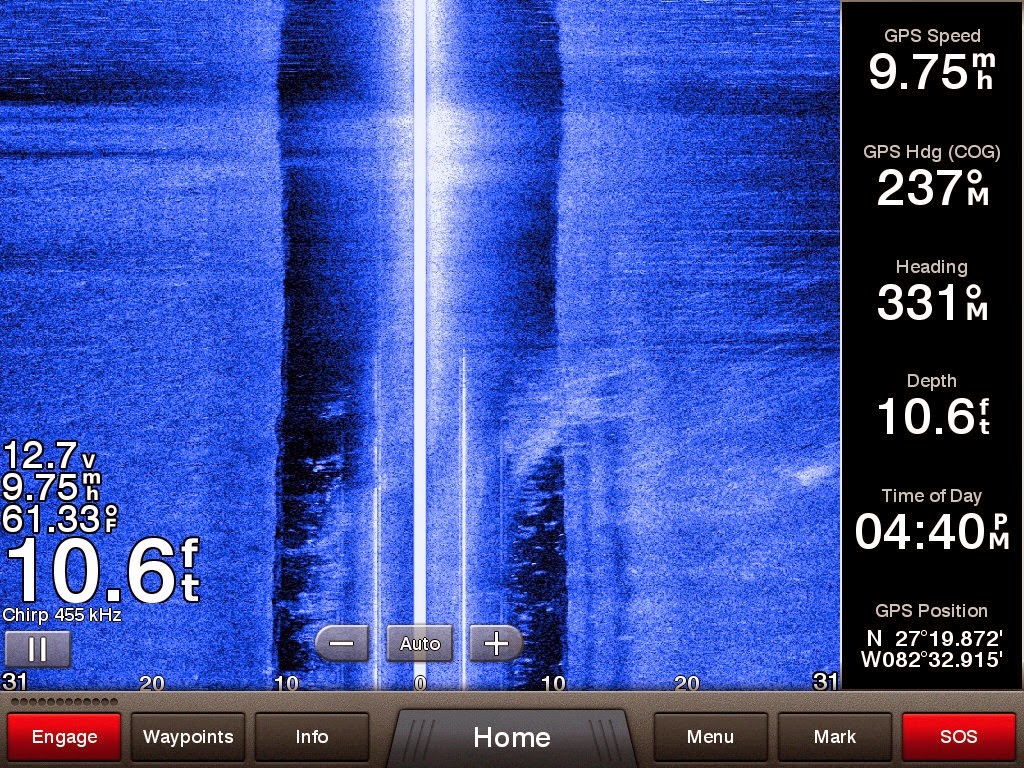 The side view trans- ducer imagery was total loss. FUBAR to say the least You could discern stuff at the edges near the center but no real detail.

I suspect that If I had passed near a seawall we might have seen something but this is only conjecture and an exercise in intellectual sonar masterbation. 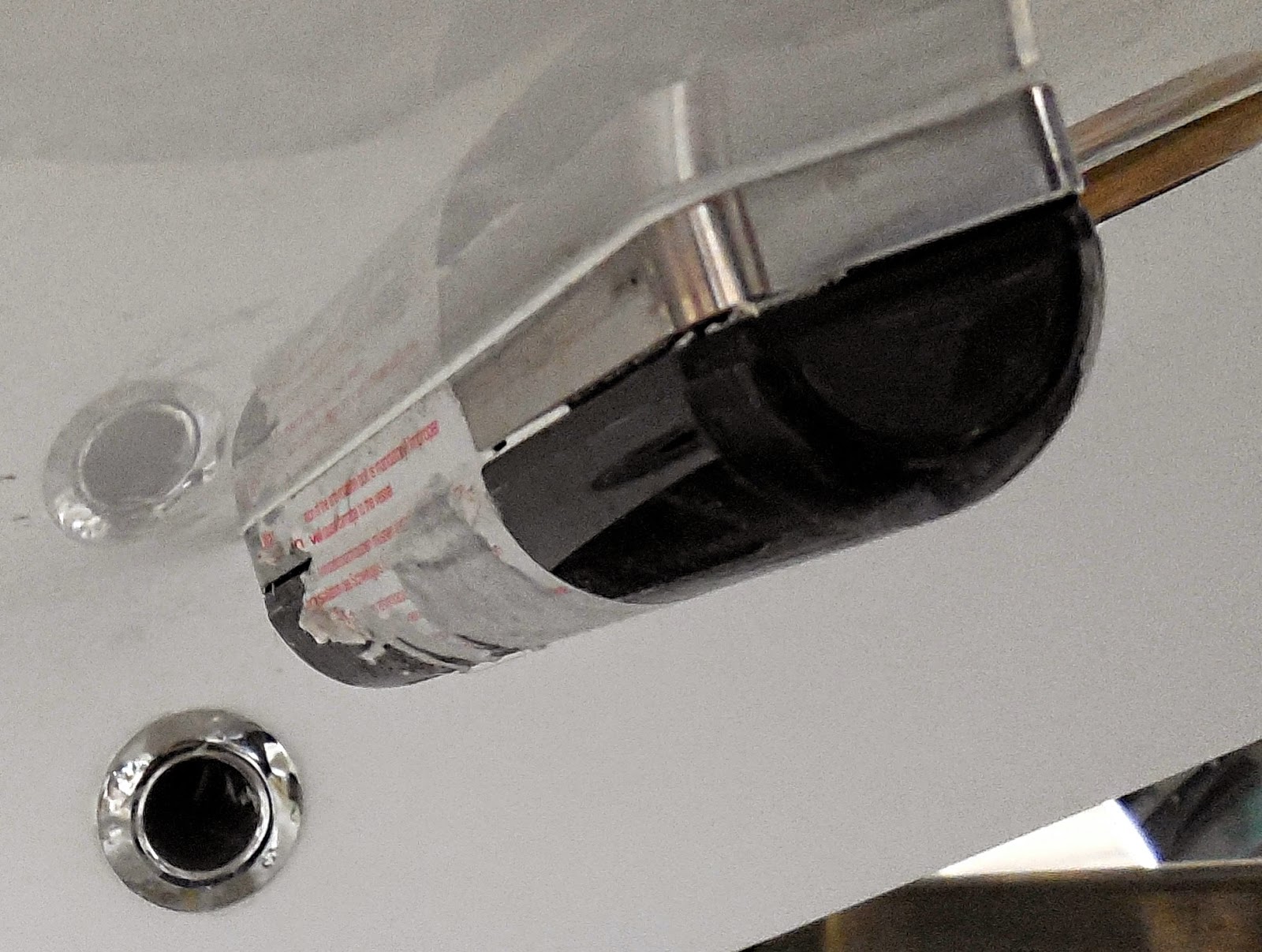 From the owner's view point everything will turn out okay. From the boat builder's perspective it's a big warranty loser. The new transducer pair at wholesale is nearly $1000. Then add in the labor to deal with the problem on top of that.

I don't want anyone to think that the instructions weren't clear because they were. Not buried as a footnote mind you, but in big print on page one. Live and don't learn should not be the modus operandi applied here, and next time please take the paper label off of the transducer before you install it.