The answer to the title question is yes, and all with a small USB stick that was originally designed to do something else. It's a Software Defined Radio. Mine costs just $18.99 and had free shipping from eBay. The SDR dongle story all by itself is a testimony to very clever work repurposing an inexpensive mass-produced technology that had laid under everyone's nose for years. A DVB-T USB stick that decodes European digital TV signals has now become a radio with substantial RF bandwidth. Software driven radios earliest manifestations started in the 1970's. The SDR version I'm playing with had its first glimmerings in 2010, and today they are widely available for a very small price.

Add to this any of a variety of inexpensive antennas you can build yourself and what you can listen to is almost endless. The frequency range of this small device is 17MHz at the low-end up to 1750MHz. This allows you to listen to FM, but also aviation, CB, marine VHF and AIS, police and emergency frequencies, and even the audio from baby monitors. Add an upconvertor for about $50 and you can add shortwave frequencies into the mix. Want to amplify the signal from the antenna add another $30. We still haven't broken a $100 yet. 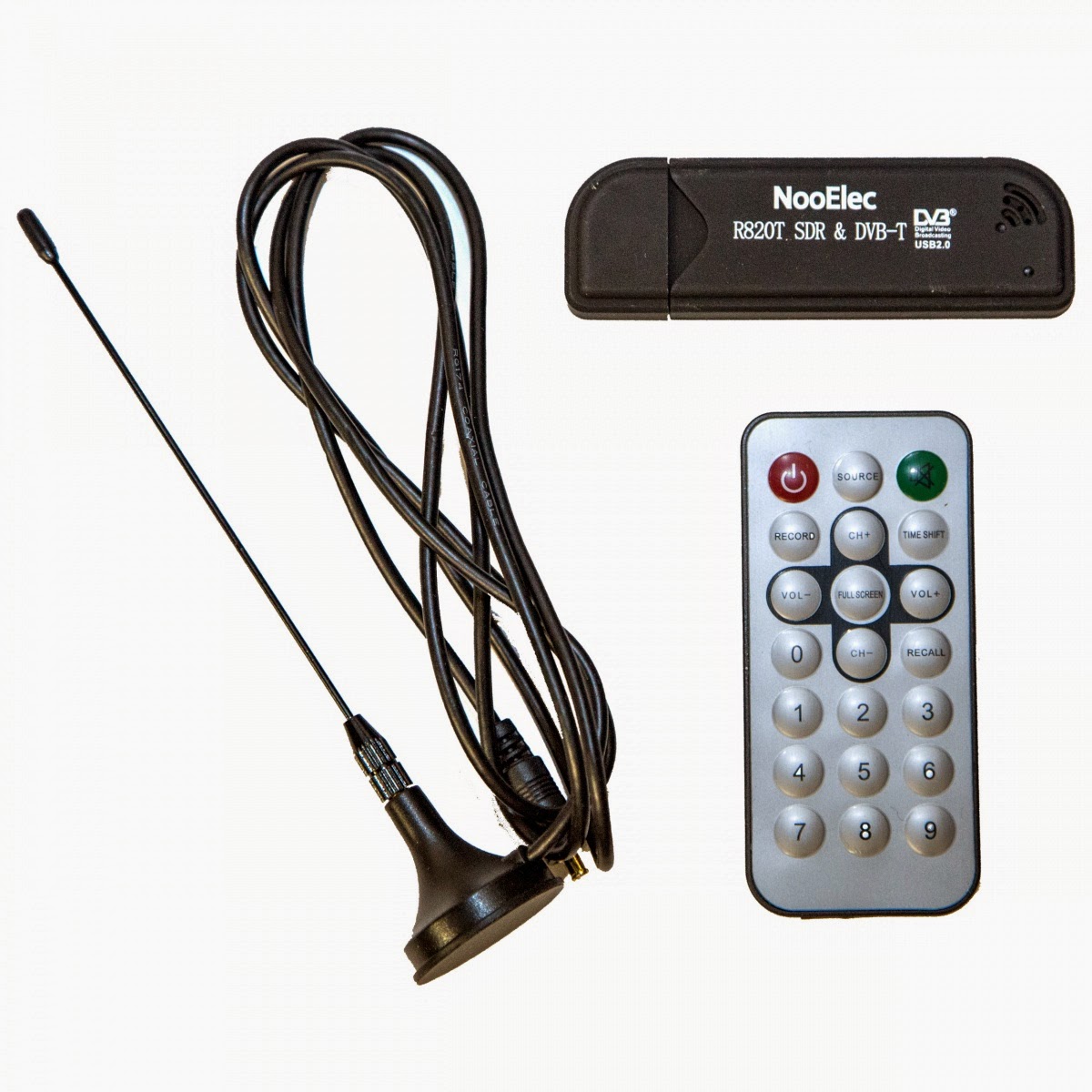 So where did this all start. In 2010 it was discovered these dongles could become radio receivers. By 2012 there was software and early implementations.

Today there is lots of software, and the capabilities and applications are growing rapidly. It has gone in a very short period of time from a device for experimenters, to a radio most of us can use right off the shelf without a lot of technical expertise.

At the very macro level an SDR radio consists of three parts. A receiver and tuner package that takes the antenna signal and converts it to a digital version. In my case this is the Realtek RTL2832U controller with a 802-T tuner. You'll need an antenna that is capable of receiving the frequencies you want to listen to. The little system I bought comes with a low-end antenna that is capable of receiving signals in the neighborhood of the FM radio band. Lastly, and most importantly you need software.

What the dongle gives you is a digital version of the signal. The filtering, gain controls and much more are all done with software replacing a lot of hardware. I'm starting with a software package called SDR# (SDRsharp.com)

The radio console is a PC or Mac. The sound card and speakers provide the audio output and recording if desired

Before we all get too carried away there are some downsides to this technology that I think are largely wiped out for me by the very low costs. But this is also is changing quickly.

In other words this dongle's performance today will not impress a serious amateur ham enthusiast. My all things RF guru friend Steve Senft took some time to chat with me about the SRD dongle's, and has played with couple of them. For his purposes the analog to digital conversion isn't good enough. The dongle I bought has an 8 bit analog to digital converter, and he would like to see 14/16 bit conversion. Also my observation is the sampling speed although adequate for most general purposes could be improved. There are now dongles available with more extensive capabilities albeit the next level jumps up to around $200.

It's a relatively new approach and hardware and software is improving daily. Over time, and I don't think a lot time, the costs will drop, and functionality will continue to improve. My dongle will appear tomorrow, the software was easy to download and is ready for me to play. I will report on my first forays into this new world next week end.

This will be a series of stories. First a 101 tutorial on installing and using the dongle to listen to FM radio. Then I'm going to make a very inexpensive (less than $10) antenna to receive the marine VHF band and AIS signals. I will follow that with a project to receive AIS signals and display the vessels position using NMEA data going to a chartplotter or directly into OpenCPN navigation software The later is more likely but we will see.

I've read about some amazing applications for the little dongle I bought including receiving and printing NOAA satellite weather images, and several SDR radios are being used to feed AIS data to Marine Traffic's website. So where does all of this go in the future. I don't know, but for sure it will only get cheaper, will do more and it isn't going away. I'm adding new link in the sidebar titled SDR for mariners. It includes lots of basic and easy to understand info.

Many thanks to Steve Senft for his time, and reader Practical Pirate who on more than one occasion has pointed me towards very cool technologies.