"NMEA TAKES AIM AT UNAUTHORIZED USE OF ITS STANDARDS

SEVERNA PARK, MD—Every year the National Marine Electronics Association (NMEA) and its volunteer members spend significant amounts of time, effort and money to create data exchange Standards that benefit the entire marine industry. Many users comply with the NMEA licensing agreement, which requires purchasing use of the Standards, but some do not. NMEA has announced that it will take whatever action is necessary to protect its ownership rights to these Standards and collect payments for their use.

“The NMEA is a member-supported industry organization that supports the marine electronics industry by providing technical training and the development of various Standards,” said Johnny Lindstrom, Chairman and Acting Executive Director of NMEA. “The Standards developed and released are the sole property of our members.

“Over the years we have been too lax in enforcing our rights under various copyright and intellectual property rights laws. By doing so, our members have missed benefiting from the revenue that should be realized from the use of these technologies. We are embarking on an effort to aggressively enforce these rights and collect for the use of our technologies by numerous individuals and businesses around the world.

“Did you know that the cell phone network infrastructure timing is, in some cases, using the ‘UTC Time’ sentences from our NMEA 0183 Standard for synchronization? I have a major cell carrier ‘air card’ that has NMEA 0183 functions in it; I find no record of this carrier ever purchasing the rights to use this Standard.

“By allowing this abuse of our Standards we are cheating those that play by the rules and by doing so support the maintenance of existing Standards and the development of future ones. In the past, the only way NMEA has known about any of these violations is by members contacting us. I ask all of our members to be more diligent and to alert the NMEA National Office of any abuses of our rights, so that we may pursue enforcement of these rights by whatever means available.”


About the NMEA
Founded in 1957, the NMEA has led the way in establishing technical Standards for data exchange in marine electronics, with the widely accepted NMEA 0183 data protocol, NMEA 2000® and certification Standards for marine electronics technicians. NMEA Standards and programs focus on insuring that the boating consumer is provided with reliable products and professional service. For more information, visit the NMEA website at www.NMEA.org or call (410) 975-9425."

When I first read the press release I was a startled. There certainly was more than some righteous indignation present mixed in with a dose of "I'm mad as hell and I'm not going going to take it anymore." I also maybe sensed a bit of fiscal concerns peeking out from under the covers. Why else the threat of aggressive enforcement after all these years?

To many NMEA 0183 is a slow and very simple serial data communications protocol that unlike NMEA 2000 can easily be parsed without any formal standards documentation. Verify this with 14 year old kid that can parse a 0183 sentence for his Ardunio project.

In today's world NMEA 0183 is very alive and doing well. It's not just for boats anymore. The sales of GPS chips are approaching an astounding one billion units per year driven by costs of about $3.00 for a GPS chip. Add a few more cents for the antenna and you're done. They live in tablets, laptops, smart phones, cars, airplanes, trucks, drones, watches and even inside people and pets. They provide timing synchronization for networks and systems, and provide data for precision farming.

Johnny Lindstrom is correct in his assertions. Unauthorized use of NMEA's 0183 standards and formats have become rampant. How did this happen and who are the possible culprits? 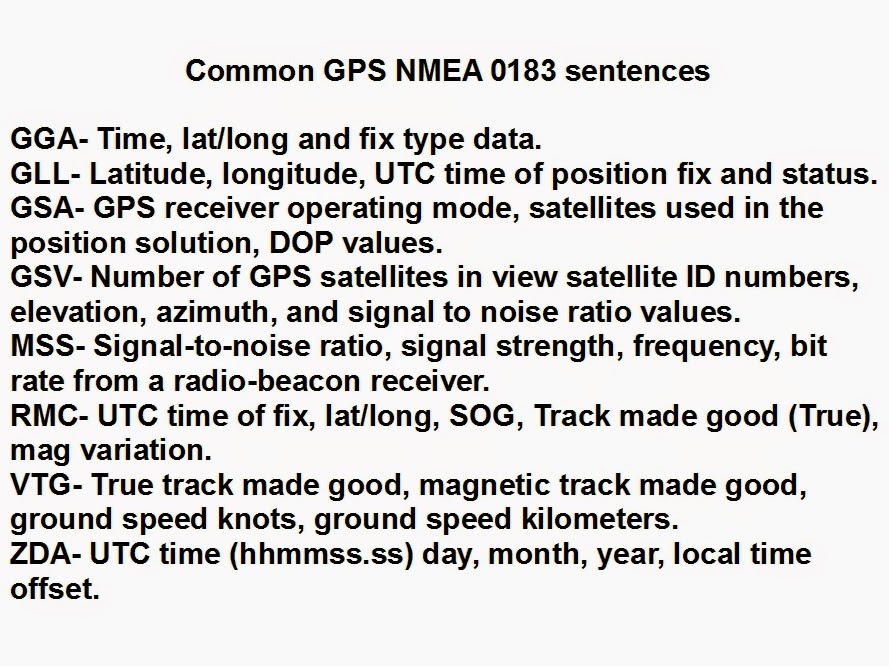 The above is the list of the most common NMEA sentences transmitted by a GPS, although many do not directly transmit NMEA sentences.

NMEA 0183 version 2.3 was released in 1997, and this is where I consider the modern NMEA 0183 era starting. The intervening 17 years saw few structural changes in these sentences making them very stable from a software developer's viewpoint.

The "How" part is NMEA's proprietary information up to around version 3.1 (2002) has been slowly leaked over the years and widely disseminated on the internet. This has been exacerbated by the sense of many that NMEA 0183 is older technology, so who would care? In reality it's more relevant and useful today than at any other time in it's past. In effect the combination of simple technology coupled with all of the technical information regarding the above sentences makes it available to anyone who desires to use it. Many do so without paying for it, and many commercial users may not even realize they should.

Who are the unlicensed users? In part only NMEA knows, but let's start by eliminating a lot of them. Here is the NMEA list of manufacturer codes, as of April 7 2014 and this list just a subset of licienced users. The implication is I hope, that they have purchased the standards or they wouldn't be on the list. In the case of the pictured SiRF GPS, the company appears twice. Once as SiRF technologies, and via an acquisition path as CSR.

There are two major groups to look at. Hardware manufacturers who use NMEA o183 I/O, and software developers. There are fuzzy areas and this can be a mixed bag of tricks. In one case I found a PC manufacturer who has a GPS chip set in their computer. The GPS chip set by itself doesn't speak NMEA, but a software driver update provided by the PC manufacturer translates the GPS data into NMEA sentences. It isn't clear if the software driver was actually written by the PC manufacturer, but even if it wasn't there are several free downloadable drivers that will do the same job.

Also on the hardware side of the fence are USB based GPS's for PC's. Most speak NMEA but in many cases you can't immediately tell whose technology is being used inside. Now include a huge number of offshore manufacturers that use NMEA 0183 in their products that may be effectively out of reach of any practical action at all.

There are many software products that use and parse NMEA 0183 as a data source. This includes GIS applications, generalized mapping programs, and analysis of GPS logging data to name a few. In addition there are literally hundreds of freeware applications that use NMEA 0183 formated data.

My advice to NMEA regarding its potential efforts to claw back 0183 standards revenue is to do it in a very careful and pragmatic way. There are endless scenarios with varying complexities and many yet to be answered questions to deal with. Look for the the blatant offenders that will make up the majority of the possible revenue, don't get greedy, and remember principles are always very costly. Chasing users who either don't have money, or don't make any money (freeware and open source projects) using NMEA 0183 is a fruitless and fiscally unproductive venture. Lastly gird your loins for the inevitable flak. You're going to get some and how you go about this will determine the amount of shrapnel you will have to deal with.

The SiRF Star III GPS and antenna was taken by Wikipedia user Pardus2
Posted by Bill Bishop - Parmain at 6:26 PM