Predicting the boating trends of 2014

It's an annual ritual. I don my pointed hat emblazoned with stars and moons, and cast the bones to divine the future of boating. The accuracy of the predictions is easily on par with the Magic Eight Ball, but with more of a bourbon infused necromancy feel. 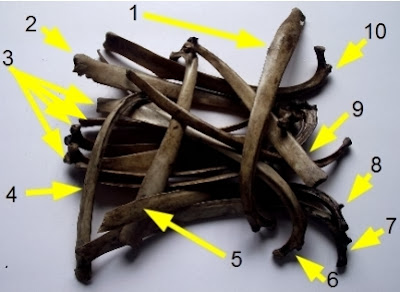 # 1 The top bone covering all indicates the overall trend in boat sales. The bone starts at rock bottom, and rapidly climbs up. That's good news. It appears the upward sales trend will increase 6% in 2014. Hey, don't grump at me, it's the bones doing the talking. In 2009, one bone actually caught fire, so this is much better omen.

#2 This bone speaks of a threat to marine electronics manufacturers in the near future. I have received an image of Google jumping into the business with large waterproof daylight viewable tablets selling for $99.00 with charts.

#3 Alignment of these bones, augurs ill. These are the four Boaters of the Apocalypse. The Jerk, Drunk, Addled, and Idiot will all have a strong presence in this year. You have been warned, so be extra aware.

#4 Portents indicate Pleather costs will remain stable with good availability of polyurethane feed stocks in the upcoming year. This will insure a large quantity of out gassing fabrics will be available to all boat builders in a variety of rainbow colors.

#6  The number of used stand up paddle boards for sales will dramatically expand in 2013. Sales of paddle boards with sides, transoms, engines, and seats will soar.

#'s 7 & 8  These are the buried bones. This does not portend well for marine electronic installers and engine mechanics. As before they will again have to work in confined, hot, and inaccessible locations while bleeding during the upcoming year.

#9 Your chart plotter will not be able to talk to you in 2104 and say something like, "Turn left in two nautical miles at marker number 7." We may see the first automated hands free docking system demonstrated this year, and head up displays are just around the corner along with near photographic quality forward looking sonar.

#10 The number of people who wish, if even for a little while they didn't own a boat will remain stable.

It's all relative. 2014 will be a better year than 2013 for boating, but remember the four Boaters of the Apocalypse are always out there.