The Evolution autopilot, from a DIY standpoint is without a doubt the easiest system to install. Virtually everything is plug and play, and in the case of this kit (part # T-70157 ) everything exclusive of the plumbing is included in the box.

The nomenclature for some of these pieces are new to Raymarine. The white and black EV1 is the sensor core. This is the computer, and heading sensor. The gray box which looks a lot like Raymarine's older course computers is the ACU-200 (Actuator Control Unit). This manages the steering actuators, and the version depends on the type of steering system your using.

The rest of these components are more familiar. The kit has a rudder reference which in my case isn't going to be used because this boat has triple 350HP Yamaha outboard engines.

The p70R control head with a rotary knob, type 1 hydraulic pump, and a Seatalk NG backbone kit are also included in the box.

Before we start, there are a couple of things about this autopilot system you need to be aware of. This system is designed to use Raymarine's Seatalk NG, aka NMEA 2000. The ACU, and EV1 have no provisions for interfacing to legacy NMEA 0183 wiring. You can accommodate NMEA 0183 by purchasing a NMEA 0183 to NMEA 2000 gateway like Actisense's NGW-1-STNG which includes the Raymarine network adapter cable.

Also be aware that the included Raymarine spur cables are fairly short, especially for the EV1 sensor core. In my case I had to purchase a much longer cable. This wasn't a problem because this was part of a larger system that included two e165 MFD's, and I could use the cable elsewhere in the configuration. 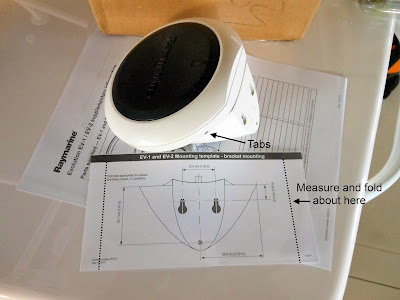 The sensor core looks like the front end of the star ship Enterprise. It has two underside connectors. One is for Seatalk NG, and the other is a device net connection used for interfacing to Volvo's IPS or other similar drive systems. The spur cable only fits in one of the connection points so you can't mess it up.

The EV1 can be flat mounted, and comes with a wall bracket which I used. There is a template, and you need to use it because the mounting screws are recessed.

There is a small wart with the template. It is for the bracket only. I was mounting the sensor in a corner. This meant I had to measure the width of the sensor, and fold the edges of the template to put it in the right location. I think it would be a good idea to show the sensor edges on the template. I put a dotted line on the photo to give you an idea of about where the edge actually is. There are four small recessed tabs that release the sensor core top cover. You will need a jeweler's screw driver or the ilk to depress them. 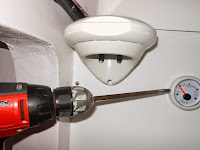 Assembly and mounting instructions for the sensor core are clear and easy to understand. In the kit are two foam O-rings, don't forget to use them. You will need a long screw driver/bit to reach the mounting screws.


A compass appropriate location for the EV1 is required. It can deal with its environment better than many heading sensors, but don't bend over backwards to stress the system. It won't like being mounted next to the engine block at all. 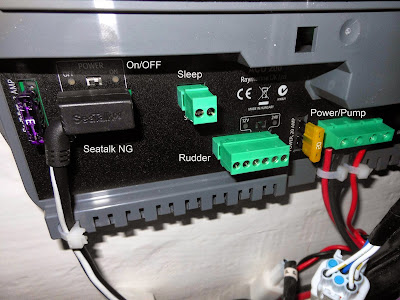 The ACU installation is a snap. Hang the box. Connect the Seatalk NG cable, the pump and power wires and you're done. There is a on/off switch and a power selector switch (12-24VDC).

There is some minor minutia to be considered here. The included Seatalk NG backbone kit came with a red/black network power cable. The ACU-100 doesn't supply power to the network so you need it. All the other ACU's including this ACU-200 do supply network power. In sum you only use the power cable when you're using the ACU-100 only.

What the heck, I installed the power cable anyway, and here is why. Although Raymarine's version of the NMEA 2000 network is slightly different, my sense is that N2K networks in general like it best when there is only one source of power to the network. But in a larger system, if you lost power to the ACU or it malfunctioned, you would lose the entire network. This would include the GPS, and a lot of other things.

I wired in the network power cable, plugged it in, tie wrapped it up, and then I unplugged it and left it hanging right next to the block. In the event the ACU wasn't available, all the owner would have to do is plug the power cable back into the block to restore power to the network. Clever of me, and I didn't break any rules, this time. This boat was going to Angola Africa, and I wanted a back up plan. The repair trip charge would be an eye opener. 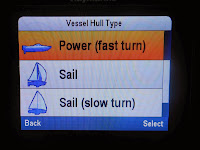 Setting the system up is very intuitive and easy. When you fire up the system, the control head asks you to pick a language, and select your boat type from a list.

Since this is a nearly 70MPH boat my choice is simple, Power (fast turn). If this menu doesn't show up, you can access it through Menu/Set-Up/Set-Up Wizard. 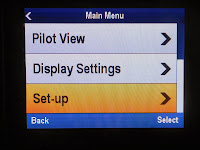 You then navigate to the dock side wizard. The instructions show you how to get there. The first thing to do is to select the drive. In my case it's a Type 1 pump. This boat has a Verado power assist steering system. One of the options is "Verado steering". Don't select this if you're using a Raymarine hydraulic pump in the system. 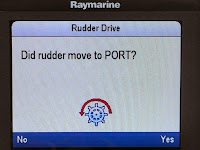 The other selections include rudder limit, and if you are using a rudder reference these settings appear in this section. This is little different from the earlier Raymarine rudder drive menus.

When you hook the pump wires up, you have a 50/50 chance it's backwards. The system moves the rudders/motors, and then asks you to verify the direction of travel, If movement is in the wrong direction, it reverses the drive polarity, and asks again if all is good. If so you're done. With outboards this can be visually a bit confusing. If the motors turn to port, you're actually making a starboard turn. The older Raymarine systems just asked in effect "Is the boat going to turn to port" which I think is a little clearer. 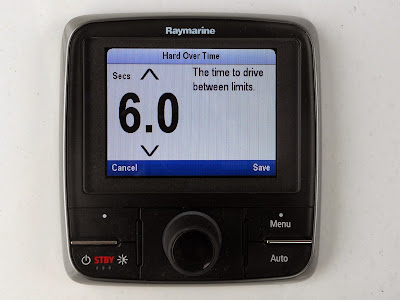 The last major setting is the hard over drive time setting. It's important on faster boats that you pay careful attention to this setting. The factory default is 10 seconds.

You use the system to drive the rudder/motors from full port position to end of travel starboard, and time it with your watch or smart phone stop watch app. You then double this number and enter it as your hard over time.

What isn't intuitive about this setting is the larger the number the more aggressive the turn rate will be, and at high speeds if not properly set the turn rate could be precipitous, and too exciting. The lower the time in seconds the slower the turn rate will be. My fast boat is set at six seconds, and it works well. Test the performance at slower speeds to verify operation. In the end, if you're not happy with the rate of turn, lower the number until you're satisfied with the performance at normal cruise speeds.

A way to do this is to set a travel speed like twenty knots, activate a waypoint, turn the boat away from the waypoint about 45 degrees, then engage the autopilot. The boat will turn to intercept the course line. How aggressively, or gently it turns is dependent in part on this setting. Again test this at slower speeds first.

The last step is to steer on a steady COG heading, and tell the autopilot to accept COG as its heading. Done, fin, the end.

I really like this system. It was very easy to install. Had a minimum of connections, and worked well right out of the box. The boat was splashed in the bay, and at thirty knots it steered straight as an arrow first time. No spinning in circles, and no further adjustments were required. It just worked period. I was one of the three NMEA judges that awarded the Evolution autopilot the 2013 "Technology" award. My experiences with installing and using this system has more than validated my decision. 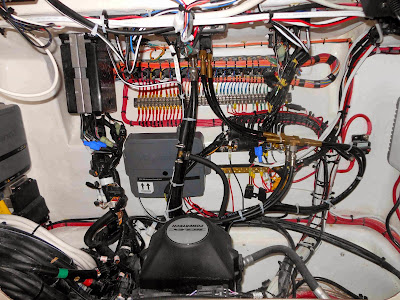 You will find a Raymarine Evolution buying guide here.