This is euphemistically an access hatch, and a poor excuse for one at that. It would have been better if it was actually more than marginally usable. This is the upper starboard arch pull area. Just below this is the big Kahuna of pull areas to the console which is only accessible from a five inch hole located three feet aft.  I refer to it as the spiky abyss of blood letting. 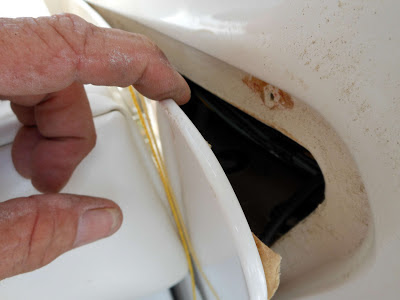 This would have been a good access location if the boat designer hadn't decided to put a huge console right smack dab up next to it. I guess the designer felt that since everything was factory installed on the hardtop by no doubt skilled professionals, that there would never be a need to replace anything on the hardtop for at least an eon. In this case eon means just long enough for the warranty to expire with a wheezing and snickering sound, and the selling of the boat to it's second owner. 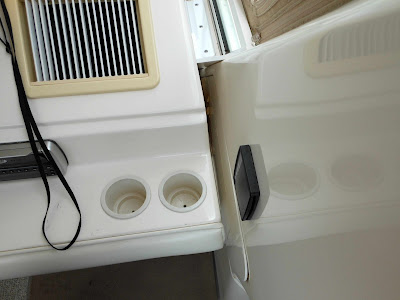 To make sure the console will never move, there is enough threaded stainless steel holding it in place that if you could cast them into sheet metal, you could make a DeLorean car body out of them. To be clear, it's not moving anywhere, anyhow. We'll have to deal with this in situ. 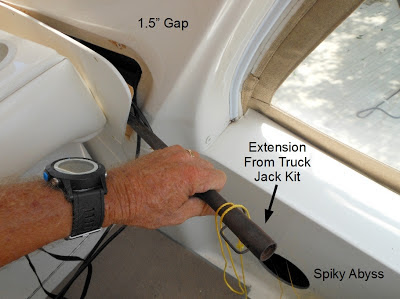 Since there is only an inch and a half gap, we have to get a bit creative and use some special tools. The first ersatz nautical item is an extension rod from my truck's jack kit. It's about 3' long and 1/2' in diameter. It was lot better than the boat hook, fish gaff, and mop handle I tried.

The technical process involves two steps. First get a wire fish through with a string attached. I can then in theory use the string to pull the KVH M1 satellite system cable through. Yep, who would have thought someone would want something like that put on a boat?

The pass through, or at least what I could see of it was pretty full. I tried to thread the needle with my fish wire, but no go, too tight, and way too far away. Out of this experience though a rare epiphany occurred. If I could just push that black conduit backward enough, there might just be enough room to get the cable to fit through.

The jack handle extension worked well, sort of. It was a piece of cake to push the conduit back enough to get the wire fish snaked in. A string was was quickly pulled, and snatched with my flaying fingers. String is tied to the M1 coax cable, and it went as far as the edge, and stopped. With some gyrations, pushing and prodding I got the connector end over the edge and about down about an eight of an inch. So here is the final act. The string has two ninety degree turns, and I can't just pull on it and expect the connector to pull straight down. Hoping this will happen, will not make it happen.

The drill is to put the jack thingy on the black conduit. I have to keep the end in exactly the right place with my left hand as I lay down on the floor, and work my arm in to the shoulder into the spiky abyss. It takes two tries to get it right. My right hand grabs the string under the arch, whilst my left hand mightily pushes the conduit back with the jack pole. It isn't really much of a Herculean effort. The angle is very awkward, and the whole set up is really uncomfortable but in a few seconds the cable pops through. Job done. A couple of bandages later, and we start the pull down to the salon, which was much less painful. I dunno, where else other than a boat can you have this type of saga occur. To go three feet, it took over an hour.

I can see how things like this happen. This boat was in production for quite a while. Maybe earlier designs had a different console configuration that allowed the access to be used, and it was later changed. There are only two scenarios. They did this from the beginning, and if so the designers should be placed in stocks, and the public invited to pummel them with used bilge oil absorbers. If the console designed changed, they should also end up in the same place for not providing a second access location, and the public should spray them with bilge water from one of New York city's garbage scows. I get to be the first to use the hose. What a piece of scatology in either case.