I'm a bit weather obsessed. No it's worse that. I'm a decent amateur meteorologist, but note I do not claim by any known standards to be a professional. I do have an impressive set of weather links and through them I have access to most of the same tools meteorologists use.

On Wednesday I'm eating lunch out and convince staff to switch one of the TV's to the Weather Channel. The morning had been warm and heavily overcast, and I was trying to decide what would become of the rest of the day. Yep the low was still in the gulf, and not appearing to be doing much. The big rain blob that was stalled a bit to the south was just starting to lift northward. I think I maybe see a little more twist in the radar image than I would have expected, but off I go to a boat condo facility. Working on the inside where it's dry has become the mandate of the day.

The rain picks up a bit later, but no real wind. I dash the gear to the truck, and arrive at the watering hole about 4:30 pm. Again, could you please replace Sports Center with the Weather Channel. I mean Sport Center is on every bloody TV. No, not the one behind me, the one over there that I can see. Thanks, and a bourbon please.

A notable rotation is apparent now, but no clear center of circulation is yet visible on the radar image. At 5:30 pm it's official, TD Andrea has formed and tropical storm warnings are posted up and down the coast.

Very early Thursday morning I'm keeping a close eye on it. The 5:00 am Hurricane Center "discussion" section meteorologists think it will pick speed and take off to the northeast. This will be driven in large part due to a mid to high level trough steering it. All of the better spaghetti models generally agree. The hanging feeder band you see above is now overhead at around 9:30 am. Winds are 24 mph sustained with gusts to 38 mph out of the SW. It's now 12:30 pm and the feeder band has now passed. The rain has stopped gully washing but it's still very blustery, and will remain that way for a while. The sun will peek out in a couple more hours and it will all be a blast from the past, a rain with a name, or any other expression you would like to apply.

There are two things that are worth mentioning. The first was that TD Andrea spun up very quickly, and within 24 hours of being declared a tropical storm it was already onshore in the Florida panhandle and heading north. The second point was we were lucky that the trough was in the right place to quickly steer Andrea off to the north east. If the trough had been further away, Andrea would have been slower moving with more than enough time to possibly develop into a hurricane. In this case it was better to be lucky than smart. 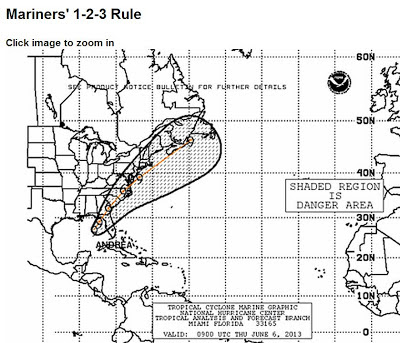 Additional widening may be done to account for the 34 kt wind field. This is designed to generally, but not guaranteed to keep you out of trouble. In the real world I wouldn't want to be anywhere near a 34 kt (Pronounced  Gale) wind field. This is all based on forecast accuracy records over previous time periods. But in the end, it's a guideline with scientific basis. 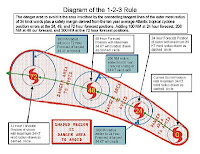 I found some voices out in the internet ether that opined that possibly the Mariner's 123 rule is to perhaps too conservative, especially given the large improvement in track forecasting capabilities. In other words you don't need to make it so wide. Maybe they are right, or maybe not. Forecasting hurricane tracks has become much better in recent times, but it's still a scientific art. 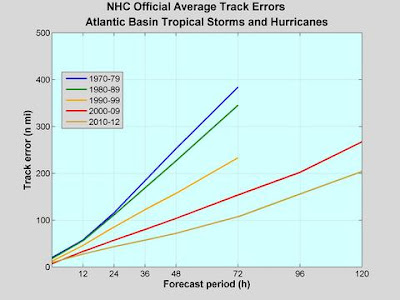 The problem I have with this argument to change the 123 rule is that track accuracy data are averages. Look at those nice smooth curves. It's apparent when you look at the graph, that over the past forty years there has been a huge improvement in forecasting hurricane tracks, and there may be some basis for the argument. 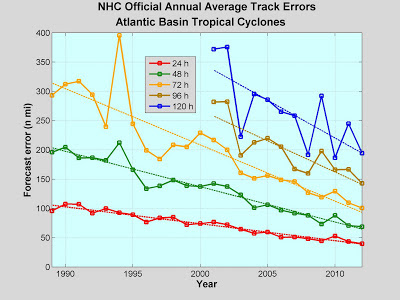 But when you look at the actual data, you can see the outliers lurking. The 24 hour position forecast is pretty much on the money, the 48 hour position isn't quite as good, and at 72 hours you can see the outliers really start to appear, and by 120 hours the data permutations are biting hard. It's pretty much hit or miss, with a lot of misses. The intensity forecasts that impact the size of 34 kt wind fields are even more difficult to get right.


Andrea's sudden appearance surprised me, and I try to pay attention. Hurricane Charley took an abrupt hard right hand turn east out of the blue, and pummeled Port Charlotte. Hurricane Sandy as a minimal hurricane clipped Jamaica and became a category 3 hurricane in the 250 miles it took to get to Cuba, and you know the rest of the story.

Hurricanes tracks, and intensity forecasts have become more predictable, but not completely predictable. I have spent a lot of time preparing for hurricane tracks that haven't gone exactly where they were predicted to. Close most times, and by that I mean within the cone of uncertainty, but not always! Mother nature at her best is capricious, and at her worst she can be a bitch. I'm an old navigator, which makes make me by inference not a bold navigator, and I'm okay with that. I can't see any good reasons at all to change the current Mariners 123 rule.

Where did the Mariner's 123 rule really come from? I don't know. There is a cut and pasted reference on several websites that it was derived from a navy film used in the seventies named "A time for all measures, Hurricanes and Typhoons." There is such a film but it was made in 1987, and it is not cleared for public exhibition. I also couldn't find a reference to the Mariner's 123 rule prior to 2009. I have an inquiry grinding through NOAA, and when it is regurgitated I will do an quick update.


You can see a full report on the NOAA track and intensity forecast error trends here.
Posted by Bill Bishop - Parmain at 9:48 AM