Recently a Florida man, of course it's a Florida man, inadvertently or at least I hope so, shot himself in the groin with a marine flare gun. He subsequently required notable medical attention for damaged anatomy located in said region. So the question occurred to me, "What is the viability of using a marine flare gun as a weapon for self defense on a boat?" 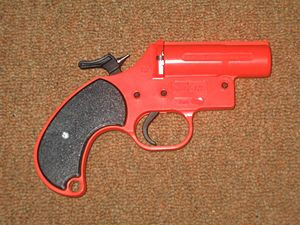 You're sitting in a quiet anchorage when all of a sudden the boat is swarmed by zombies and pirates looking for rum. Your trusty 50 caliber machine gun is unfortunately disassembled and safely hidden out of sight from the gummit, laying under a foot of greasy black water in the bilge. All you have is your plastic orange flare gun, and six outdated 12 gauge red flares. With a glimmer of hope, you chamber a red flare. The trigger is pulled, and you fire at point blank range at the nearest zombie. The flare bounces off the zombie, and falls on the deck. 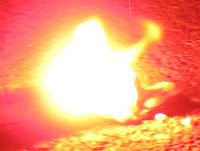 You, the zombies, and the pirates all stop at once blinded by  the ball of red light until in just seconds it burns through the deck and falls into the bilge water. The ensuing chemical reaction blows you backward off the boat now completely devoid of any eyebrows. Swimming away you try to keep your head real low to avoid your 50 cal ammunition that's now randomly hurling exploding bullets in all directions caused by the conflagration. A zombie near you tries to give you "the finger" as it flounders in the water but it falls off.

Two weeks later, you take a brown sharpie, and draw on eyebrows in preparation for the hearing. It seems that 400 gallons of diesel washed up on Longboat Key's shoreline, and the 50 caliber machine gun was found when the Coast Guard raised the boat. The Paradise Condo Association is upset about the bullet holes in the building's stucco, and a resident is claiming her Sphynx cat became so scared all of its hair fell out. There's even a zombie that's missing a finger and wearing a cheap suit who wants to testify.

If you search around very few people have ever successfully used flare guns for defensive purposes. Mostly for those who have tried it, the end results tend to follow Murphy's laws of unintended circumstances. In the end, despite what you see in movies, it's a very poor choice for a weapon, especially on a boat full of fuel. It is however a great option for emergency distress signaling.

The primary ingredients in a flare are black powder used to propel the flare to altitude, and Magnesium which provides the light. We will pause here for a moment to just consider this metal.

The property that makes magnesium good for flares is its very high burning temperature, of up to about 5600 F producing a bright light. The down side of magnesium is it's difficult to extinguish when burning. Throwing water on it makes the problem much worse. Not only does the water immediately turn to steam, but then the steam reacts with the burning magnesium creating hydrogen gas. Things instantly go from bad to much worse. Your typical small B & C boat fire extinguisher won't help here either. Only a class D fire extinguisher can put out a magnesium fire, and it should be a large one.

Other chemicals added to distress flares are various forms of strontium, and a oxidizer to help it burn. This creates the cheery red color.

I'm not going to belabor the point, but all recreational boats over 16' operating in coastal waters must carry USCG approved day and night visual distress signals. Manually powered boats, and open sailboats under 26' are excluded.

These can be pyrotechnic devices, or as simple as a distress flag, and an electric light that blinks SOS in morse code, as if anybody in this iPhone age actually remembers what this is. In the end three non-expired USCG approved red hand held flares meets the test for most boaters. Beyond that the prudent captain can make further decisions based on how and where they boat.

A couple pieces of advice. RTFD (Read the directions first) before you need to use them. Light and hold hand held flares over the water on the downwind side of the boat at an angle that won't let it drip hot stuff on your hands. Remember this stuff burns pretty hot. Shoot all aerial flares down wind, and not over land or other boats. Don't ever point a flare gun at your groin, or at anyone else even if you're joking.

Lastly check the expiration dates, and properly dispose of expired flares. By that I mean you can't take a bottle of rum and a bunch of expired red flares and fire them off in the bay with your buddies. It's illegal. The good news is you can do this with white flares, although I wouldn't have the rum on the boat when you're blasting away in these paranoid times.

For those who would feel emasculated by using a cute feminine looking orange plastic flare gun, there are other options such as the manly B&D ExD 37mm Extreme Duty Top Break Launcher.

As scary as it looks it's legal, just as long as you only have 37mm flares on the boat. It can shoot a lot of other things too, but if that other ammunition is found on board it automatically becomes a weapon. I understand that Magnifico Yachts is giving one to each buyer of their new 2000 hp Phallic Fifty go fast boat as a buyer incentive. If you have one one of these on board, I would tell the USCG in advance of any inspections so they don't get too excited when they find it.