Today on "How It's Made", bronzing chart plotters, macrame hanging basket holders, tie dyed T shirts, and a Rant. 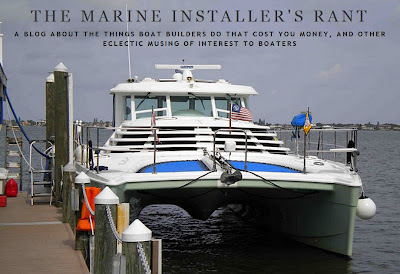 Milling around online and looking at blogs, all I could think was "look at all these billions of megabytes of crap." In many ways it isn't. Families use it as an online equivalent of the Xmas letter. People on trips chronicle their ventures. Teenagers write about their angst, and almost all of it is of little interest to me. I was sorry to hear Aunt Em broke her hip, but Dorothy's blog tells me she would get better if she quit stealing the morphine.

So off on the Rant I went knowing at the time I could do better. I knew could touch the obviously masochistic souls of boaters, and they would flock to my erudite verbiage. I had no idea at the time how difficult and time consuming, albeit enjoyable the reality is.

The blog has rules. Don't hurt people, or products, although I can poke around the edges of this a bit. Don't do product reviews unless it is something unusual that just tickles me. There are plenty of other good writers who specialize in this. I also try to take teaching moments and make them more interesting to read. In other words don't be pedantic if you can help it. I maybe didn't quite hit that mark in this story

So let's assemble a blog entry. I took pictures of some piles of old marine engines, and other other junk. Okay I can do something with this. Maybe a story about a cult that just worships old marine junk. Maybe a real "Cargo Cult" tie in. Hmm, I better look that up first to see what it's really all about. Or I could do a piece on proper, and environmentally safe disposal of old marine stuff. Nah, who would want to read about that. Boaters in blue blazers frenetically dancing around a fire with flame hardened wood spears worshiping a Yamaha lower unit, now that's a feast for my mental eyes.

The first step is to upload photos out of the camera, and dump it into Google's Picasa photo editor. There basic cropping and enhancements are done. 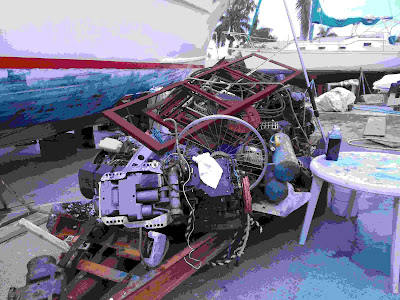 What I end up with is the cropped version. I shoot at 16 megapixels, and the cropped shot is still larger than I want to upload to the blog, so off it goes to Paint.net. Paint.net is a quick and easy way to shrink the photos. Open the photo, do a "save as", and it gives you the option of setting the final file size. If I want to add basic text and arrows it gets done there. 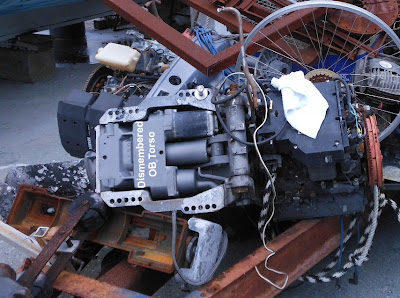 In this case I wanted to do something a little fancier. I wanted rotated text on the picture. To do this, the picture gets opened in Open Office's drawing program. The text work gets done, the picture is exported as a jpeg, and it's reopened in either Paint or Picasa. The image is recropped to get rid of the page around it, and then it gets uploaded into the blog editor. Whew. A simple effort like this is a half an hour by the time you're through with it. As a final note about photos, they are either mine, clearly public domain, or are used with permission and attribution.

If I want to get real fancy I use Gimp. This is an open source Photoshop-esque program. I typically use it to cut objects from one photo, and move it onto another. Gimp is bloody complicated and you need to take the time to learn how to use its zillion capabilities. I also use Microsoft's ICE for panorama photo stitching. I like all of these programs because they're free. This means the Rant's production budget can afford them. 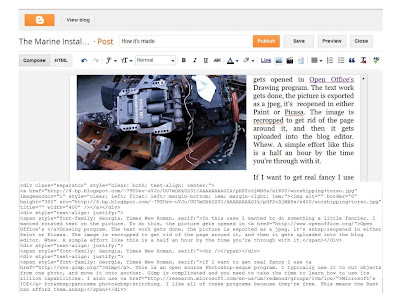 I start by loading all of the photos, and then write the body of the story. In my muddled mind, I have already decide what I'm going to say sort of, and the order in which it's going to be told, maybe.

There are two editors, In the picture on top you see the composing editor, and below it is the HTML version. The composing editor is translating my efforts into the sometimes inscrutable Hyper Text Markup Language. This is what your web browser receives.

The catch is that often this translation is not perfect, and some things can't be done like paragraph indents. I mean I can, but it is so tedious it's not worth the effort. The translation often has spaces (&nbsp;) the editor thinks I need for that extra special paragraph justification. They can do odd spacing things, and I have to manually edit them out of the HTML.

Cutting and pasting text can cause problems, and importing any text off the web carries all of its attributes. Oops it green, and 72 point text. Extra carriage returns also seem to regularly sneak in. Trying to use a word with a diacritic mark like the acute one in the word passé requires me to find it on line, past it into the editor, and then manually reformat it.

Now on to orphans and widows. My newspaper editor friend Dick Reston suggested the change from just using all large pictures, to mixing the sizes up. This vastly improved the appearance of the stories.

I have some control over picture sizes by the way I crop them, but Blogger's editor only allows the choice of four sizes once imported. Small, medium, large, and extra large. Medium and extra large are generally not good sizes for my template, so large and small are used.

This suggestion also came with the warning that's it not good to have orphans and widows hanging around the blog. They make readers uncomfortable, and drive down the blog's property values. So I have to manually round them up, and put them on a bus to somewhere else. I do this by shortening the text to fit, or extending it to completely enclose the photo. 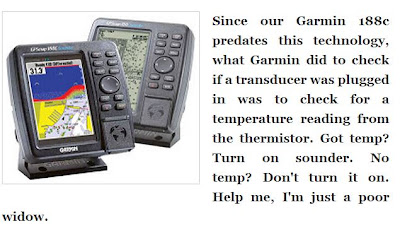 The story is nearly done now, just a few more steps to go. the first is to do a "Control G" and search for double spaces, to to, the the, of of, et al, and what I call Karl's your you're's.

Now Kate reads it, and her decision is final. Her third eye often sees things I don't, and In the case of the original FEMA story version she just said "Don't you dare." The vastly different second version was a lot better. I'm not going to be chased out of town now by contractors with flaming torches and pitchforks.

In the end this took about six hours to write. About one third photos, one third writing, and about one third editing and formatting. All and all It's slowly been getting better. I'm very grateful for the constructive criticism that I have been the beneficiary of from both Ben Ellison, and Dick Reston. Both are truly skilled in their arts. Now you know how its made. Next week on "How It's Made", bilge oil diapers, wood emergency hole plugs, and sandals made from old tires.

There is always one mmre typo left. Many thanks for reading.
Posted by Bill Bishop - Parmain at 11:11 AM

Email ThisBlogThis!Share to TwitterShare to FacebookShare to Pinterest
Labels: blog tools, blogger, how to write a blog