I love working in this boatyard. There are no cute whirring golf carts driven by staff wearing polo shirts with logos. It smells like salt air, fish, and in older times you could add creosote to the odorous mix. My eyes see sparks flying off steel hulls from grinders, new copper being nailed onto wooden hulls, and vessels of all types. It's a mixed use facility. Fish house, seafood market, boatyard, two restaurants, and commercial fishing boat docks. Something is always going on. Reefer trucks are pulling out with frozen fish and bait, fork trucks are delivering pallets of ice to boats, and lots of fish and crab. The company has been in business in the Cortez Florida area since 1921.

In many local yards everything looks the same. Endless square footage of white fiberglass, but not here. Boats made of wood, steel and fiberglass are all jumbled together. Commercial boats are getting bottom jobs. Personal boat projects are being finished, and a few projects have been added to the museum of shattered dreams vast collection. So let's take a look at this week in the yard.

This is army boat T-493 in for steel hull repair. During the second world war, 170 wood versions were built. After the war starting in 1952 the design was modified and 82 steel versions were built in three different yards. Most were mothballed shortly there after.

They were sixty five feet long with a 50,000 lb capacity cargo hold just forward of amidships. A single screw slow turning diesel powered them, and at around 7 knots they had a range of up to 1600 miles if they were creeping. 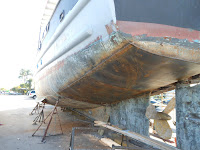 These were portly round bottomed full displacement vessels built to brick outhouse standards. A quick sweep of the internet shows displacements varying from a svelte 150,000 to a hefty 220,000 pounds. Most of these ended up as work boats of various types, and several were converted into cruising vessels. 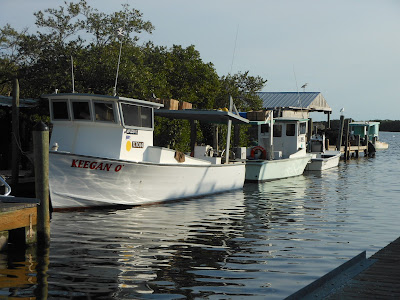 Although many types of fish pass through this facility, mullet is king in the winter. Mullet has been a staple fish since the late 1800's. It was plentiful and fed many families on the west coast of Florida. But in more modern times, it fell out of favor as a food fish. It largely disappeared from seafood markets, and the ever present old refrigerators used to smoke mullet went to the dump. 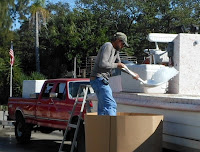 In the 70's mullet had huge resurgence as a source of roe for Asian markets. Air dried mullet roe has several names. In Japan it is known as Karasumi, and in the Mediterranean it's called Botargo. 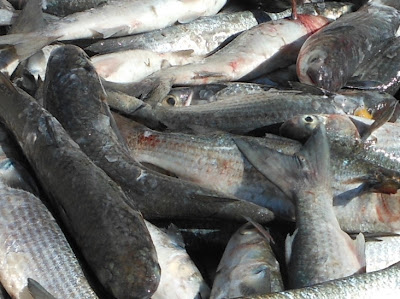 The roe was so valuable, that mullet almost went the way of the Dodo. In 1995 fishing for mullet with gill nets was banned, and the population rapidly rebuilt itself. To catch mullet you now have to use a cast net. Mullet always schools, so on a good day a cast can yield more mullet than you can haul into the boat.

The males are separated from the females. The roe is taken from the females, and what left of both sexes becomes bait, with a small portion becoming people food. Smoked mullet dip with crackers is common fair in many local seafood restaurants. 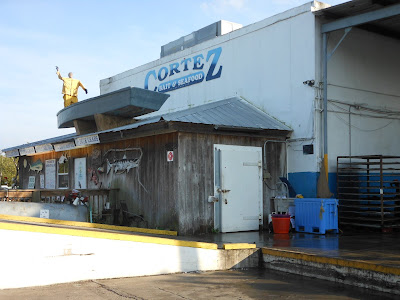 As if there were aren't enough distractions in the yard, the N. E. Taylor Boatworks is located in the Cortez national historic district. This includes about 5 blocks of working commercial waterfront facilities. The USCG  Cortez station is on the western edge of the district, and a nice little museum featuring the marine aspects, and history of the area is on the eastern side. 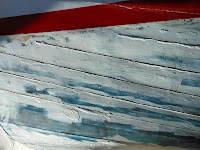 All in all this is far more interesting, to me at least, than working in a yard full of plastic Clorox bottles. Wood hulls being caulked, and real working boats long on function, and short on form being overhauled. 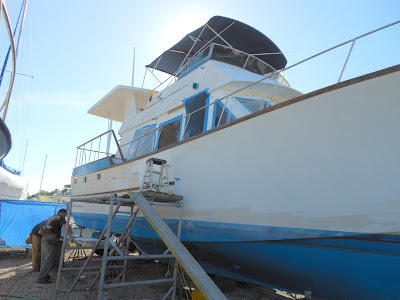 So what am I doing there? An older Ocean Alexander trawler is getting a substantial face lift, and paint job, and I'm installing a new autopilot along with some electronics upgrades. Work isn't going very fast because your installer is so easily distracted. What's that shiny thing? I must go and see.

Don't think for a second you can get into this yard, and steal something. it's guarded 24/7 by an elite squad of ever vigilant attack roosters. You have been warned. 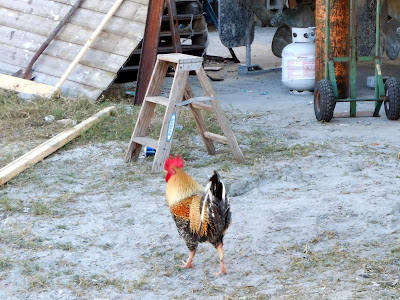 This small community is a fun day trip. Have a beer and a grouper sandwich at the Cortez Kitchen, and check out the waterfront activities while you eat. Then walk up the street and visit the museum.

I'm working on a gourmand expose' about hush puppies, which any real seafood restaurant worth its salt should have on their menu. The truth will set us free.
Posted by Bill Bishop - Parmain at 10:37 AM